A game where you face your inner demons
Submitted by barret232hxc (@RagTagBarret) — 8 minutes, 41 seconds before the deadline
Add to collection 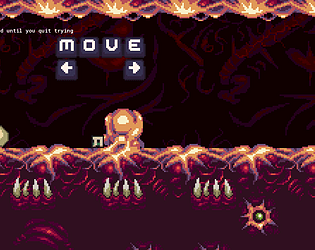 Yeah the Zerg graphics are awesome, Loved the idea of changing direction once in a while when being old. But i dont understand one thing, how come you kill your inner demons once you are old?

I guess it's like you lived life and you were taunted by them so you try to destroy them then you start life over and they can't effect you anymore because you learned that in the end you're more powerful than them.  I wanted to do more with the 2nd playthrough but ran out of time. I wanted completely different dialogue bubbles and to cut out the end part of becoming the giant monster because the 2nd time you'd just be able to get through life much easier.  But the only things I got to do was the beginning message when you restart and the jump that you fail the first time now was possible the first time.

Idk why the the graphics gives me a zerg feeling, very cool

glad you enjoyed it. I was thankful for Luis Zuno providing such awesome tilesets to help me achieve interesting and cool looking world for the game. https://opengameart.org/users/ansimuz

this is some deep shit I saw and played.

thanks. This is my second game jam  game and I really was struggling with the theme in the beginning but once I knew what I wanted to do I really was having a fun time trying to put together an experience that felt somewhat cohesive and hopefully had something that might be relatable for others.

Congratulations, you have made the most compelling experience I've played in this jam for now. I loved how you told a deep story with some simple mechanics. Great design

Thank you very much. It's kind of funny b/c at first when the theme was announced I was like oh no I have no idea what to do then the idea came together and originally it was going to be more of a puzzle game where you were going to have to solve puzzles that could only be solved at that stage of life and then you would start all over when you got to another stage but then I realized that was way too much for the scope of this jam and my abilities so I decided to change it into more of a narrative experience . I wanted to play around with the idea of enemies that didn't kill you but just effected you in different ways, b/c I felt like combat and getting killed by them wouldn't really fit the theme I was going for with this jam

This hit deep! Really loved how you portrayed such a philosophical and powerful story, I welled up a little. Such a wonderful submission. It could have been improved slightly at the end, with the transition back to the egg, and the demon mechanic. Really tied together nicely. Thanks for sharing this.

yeah I had originally planned for a lot of different things on the 2nd time around but I ran out of time. I wanted to change some of the dialogue more and maybe add new things and make it less scary now that you have learned how to deal with those inner demons but all I really got to do was the beginning message and that the enemies don't do anything to you now. but yeah for 48 hours I was pleased with what I was able to get accomplished. And that's so cool that you enjoyed it.

Terrifyingly realistic... awesome.  I had no issues from start to end.

I'm glad you liked it and had no issues. I had a blast making it. But it's even more rewarding to hear that others have enjoyed the game

- Music, Enemy art, and Keyboard font were all freely publicly available assets. I have them credited on the game page.