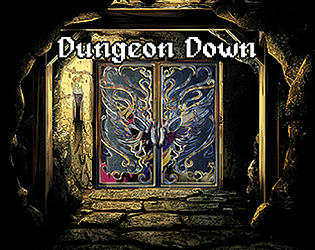 AH! This was perfect! Usually I like story focused rpg games better but who the hell doesn't like a good dungeon run sometimes? And this is just the perfect dungeon crawler! The visuals (sprites, maps, etc) were really good but the gameplay is what makes this brilliant! I like being able to upgrade my skills and the stores.. all rewards from my awesome skills!
The battles were so balanced too! Usually in games like this one thing that always bugs me is when the enemies are soo strong you just want to scream (or when your hero is so strong that it's kind of boring lol). But I didn't feel that at all here.
Going from floor to floor while collecting cool equipment I expected at some point to hit a wall-monster that I would cry over not being able to defeat but with some strategy (and the right skills set) the game is pretty fun to play.

Overall: This one is going to my favorites! I'm still at floor 21 but I'll definitely keep this game around for when I'm bored... damn just thinking about getting to floor 80 is getting me all excited! Is that really the max level? :P I'm really curious to know!

Hey Kyattchan, thanks for the amazing review. One of the things I love so much about games is the sense of reward when you make the right strategy, that's was my main focus with this project and I feel happy when someone shares this same feeling playing Dungeon Down.

In fact, there are a little more than 80 floors and when you reach it the tough fights will really begin ;)

The difficulty and stat progression were perfect. I mean absolutely perfect. It was as hard as you want to make it and you could always go back to grind levels or skills if you were stuck at all. I would say that the only thing I wish were added were multiple difficulties like Diablo. Each difficulty starts about where the last one ends and keeps the same progression as the first one--but gives more experience and higher level loot... Might need to make a few more levels of the skills too. Definitely outside the bounds of one month of work, but could make this closer to a 10-15 hour game.

Hey @UnsungGhost, thank you for playing the game. I loved your suggestion of creating different difficulties levels like Diablo, thank you so much for your feedback!

This was a brilliant showcase of how to handle character progression. The game is compelling and that's good enough to keep me playing it. I really liked this one, and it got my vote. Congratulations luizcubas.

Hey Drift! Thank you so much for your gameplay video and your vote, watching you playing this game for 3 straight hours was insane, it really make feel that one month of hard work was really worth it :D

Thanks for playing this one Drift. I watched the video yesterday and had to seek this one out. Amazing game.

Hey Luizcubas, I just gave your game a play and really enjoyed it. I found the loot gave some strong Diablo vibes...just having colored labels for the different rarities does a lot. Just the UI overall felt really good and added to the feel.

It took me a few floors before I figured out that the elemental weaknesses were being told to me down at the bottom. Once I got that, I felt like I had a bit more to think about (prior to that I was just spamming skills and not really understanding the difference). I still wasn't totally clear on what was weak to what, but I did enjoy experimenting.

I liked having the abilities on WASD, it felt really intuitive. One thing I did find I wanted to do was be able to trigger a bunch of skills/attacks simultaneously (like in Valkyrie Profile). It would be really cool to combo different attacks together, maybe combine them for different effects :)

Anyways fantastic job for one month! It feels really polished and cohesive.

Yeah, I need to add more clear information about wich are the weakness of each element.

I liked your idea, cast simultaneously different skills would be so cool.

Thank you for your kind review.

Just tried out this game and it was a lot of fun! It is very simple and to the point in terms of story/overall mechanics which makes this very easy to pick up and run with it. Combat I found to be quite fun and the pace just about right. Being able to swap out different skill attacks was nice, so matching elements with the floor was a breeze, though it did get a bit repetitive since the elements seemed to change often enough. The equipment that you get throughout the dungeon more often than not is worse than what is already equipped making a lot of it perhaps a bit pointless - might as well just give extra gold instead! The dungeon levels were a bit lackluster - there was almost no point to being able to walk around at all since each floor was the same - one or two items in chests/crates and whatever monster is blocking the ladder downward. More variety here would have been awesome :)

Overall the atmosphere and presentation was great. This is the sort of game that if worked on, extended, and polished further it could probably go up for sale on Steam. Great work!

Hey @PVGames, thanks for playing the game and for your kind review.

My initial idea was to make bigger dungeons with different enemies and traps, I thought that one month would be enough time, when I realized I was already missing only 10 days of the deadline of Game Jam and had only developed the battle system, my only choice was to develop simpler dungeons.

Hello everyone, I'm so sorry about the bugs.

I kindly ask you to try running the game.exe file by right-clicking and selecting Run as Administrator, I hope this fix your issue.

Nice game, looks good and have enjoyable gameplay (played only 11 levels down).  I don't know if it happens later but I would like to see enemies having multiple elements (like light+ice=crystal).  Sadly it leaves the impression that it's gonna get repetitive pretty soon (with fighting and dungeons).

Also found out that levels don't exactly build themself to be gone through. Happened at level 1 (new game) and then on level 11, gonna add the screenshot how it looks.

Oh boy, something went very wrong, this design of the cave should never happened :(

If you want still to keep try the game, I'm gonna tell you a secret, in the map, press 10 times the "L" key, after that, whenever you get stuck in the dungeon just press "N" to jump to next floor.

Hey @Vodun, thanks for playing the game and for your review.

My initial idea was to implement multiple elements, unfortanetelly I couldn't develop this in time for the jam. Maybe in a new version I'm gonna do it.

If you can, please send the screenshots, as the dungeon its kinda random, it's possible that this problem occurs.

Hello there! I've just downloaded your game and started playing, within the first minute I got this error:

I'm using Windows 10, I'm not really sure how to get around this. I've tried several times with no luck :(

Hello @Nicola.
Sorry about the bug. Thank you for trying the game anyway. If you can, try to run the game.exe with right mouse click and select to Run as Administrator, tell me if it works.

No apology needed! I will try this first thing in the morning and let you know how it goes, just about to sleep now. Hopefully it will run with no problem.

Just to let you know that running the game as administrator does work for me. It may be worth mentioning this on the game page to help others if they encounter this problem too. All the best!

Hey @Nicola, amazing, thank you for your feedback. This gonna help me alot!

I decided to give your game a go, and... WOW! A dungeon crawler that really gets the mood done correctly. I almost felt like I was playing some YS game instead of a one-month jam game, haha. I'm still currently playing, but I decided I needed to get this review out as soon as possible. This game has some real potential, let me tell you that.

The only thing that I have noticed so far is that you might want to lessen the multiple forms of many enemies you meet, I mean most enemies I have to defeat twice or thrice before they fall. I'd probably increase their HP / defenses a bit to compensate but leave transformations to those larger monsters you meet (I'm only at dungeon level 10, watching at that giant blocking my way).

I haven't played many entries yet, but this is the best out of the ones I've yet played. A real winning candidate. Congratulations on bringing this game out! (Maybe I'm biased as I really enjoy GOOD dungeon crawls.)

Hey @zelgadis85, thank you so much for your feedback and I'm really happy that you is having fun playing the game, your words was enough to make me feel that this one month of work worth it.

I was aware that lack of dialogue in the game would generate some misunderstanding, this is my fault due to my difficulty in writing English. The enemies don't have multiple forms, in reality it's like a troop but you must defeat one at a time. Each enemy has one element and you should explore the weakness of each element, for example, if the next enemies are in the order: fire, lightning and dark, then it would be prudent for you to equip skills: water, earth and holy.

Once again, thank you for the generous words.

Let me think of  Valkyrie Profile

I think something is broken or a plugin isn't working correctly.  As soon as I descent into the first dungeon the game crashes.

Also, out of curiosity, what plugin(s) are you  using for your auto save functionality?

Submitted
Tales from the GrailQuest Taverns
LikeReply
luizcubasDeveloper2 years ago

Hey @mojoaa13, thanks for playing the game.

Hmm, could you send me a screenshot pls? What version of Windows you using 7 or 10?

I developed the autosave functionality, actually its not a plugin, I just renamed the first slot of the save file list and I'm using the  DataManager.saveGame(1) when perfoming a transfer of maps :) 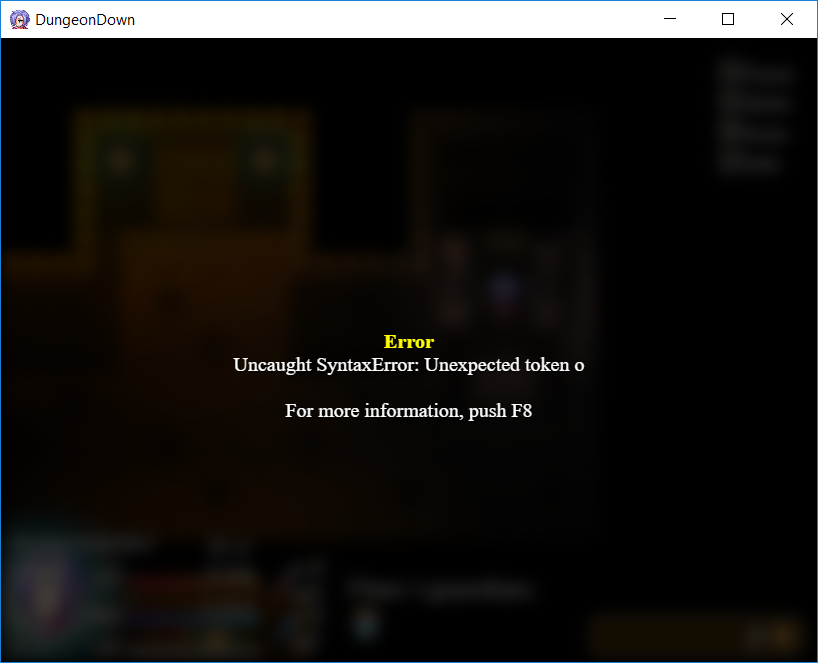 Here is the error.  Using windows 10.  Nothing happens when I press F8 otherwise I'd include a capture of that too.

I just uploaded a new version, if you could try again I appreciate. Sorry for the trouble.