Starring Moon as ball, and Black Hole as hole
Submitted by Winged (@wngdadventurer) — 28 seconds before the deadline
Add to collection 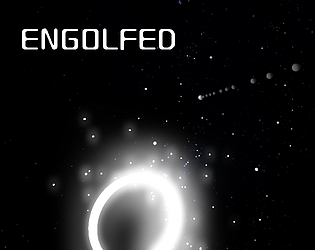 My Feedback and thanks for the help this jam.

I think this is my favourite of this jam! I'd love to see this one iterated on since my brain is already racing with ideas just from what you've started here. Well done!

3D Space Golf is awesome! And surprisingly relaxing. Kuddo for the visuals clues and the interface of the game, it makes it really pleasant to play. Playing with 3D physics can be really fun when it's well done, and it is the case here.

Nice work, super fun and interesting concept. Would definitely like to see this fleshed out more. Could be cool to have a "putter" and "wedge" selection; sometimes I found myself wanting to move the ball to the other side of the planet it was on, which required me to just barely tap the ball a bunch of times (since any significant amount of power on the swing launched the ball off the surface). Spin/angle controls would be nice too. All in all, a cool concept that could definitely be a really solid game if you keep polishing it.

This game is fun and innovative while it lasted... but it is so short! I would totally like to get a bit more of it.

Also, it would be really nice if you could look around while the ball is moving, and start aiming sooner after it lands. I'm a pretty bad golfer and I find myself waiting more than golfing from all the little nudges I need to explore the map.

This is one of my favorite games so far. Extra credit for making a 3D game too. I like the graphic effects and the shoot sfx. I did have a hard time figuring out where to aim. But overall very creative and fun 3D game!

Sometimes it was confusing where to go next but some exploration solved that. I'd say that's the strong point of this game, I wish you had time for more levels because I like to work out the route I have to take! It's missing a few polish items, like a prompt to restart when you die and automatically loading the next level, but seems okay for a jam game. I understand you took a big leap with your life recently so you might not have had as much time for the game as you would like. Congrats on making your first non-platformer.

Interesting use of Black Hole theme! Short game, but pretty and relaxing!

See you on next gamejam!

Much love for this one! Was really soothing, after working so hard in the jam. It might be my favorite entry of all of them! I would have liked some sort of simple shot limit or something to make it a little bit more challenging. Now its more of a relax/exploration game then a golfing one. ;)

First of all, let me point out that I played this game on a laptop with roughly as much power as an abacus, so I probably wasn't getting the full experience here. Nonetheless, this was a fun time! Pinging from planet to planet and setting up your final shot is really therapeutic, in a way that's oddly similar to Kerbal Space Program. In fact, at one point I caught myself reaching for the F5 key to quick save after setting up a difficult shot.

The ambient track is nice - really helps to enhance the feeling of zen - but it's spoiled somewhat by the sharpness of the golf ball sound. The visuals, in so far as I could see them at three frames a second, are a little stayed, but understandably for a first 3D game, and there are some nice touches, like the gravity field, the motion trails behind the moon ball, and the "stuff" around the black hole.

All in all, I wouldn't mind seeing some more of this; I think there's mileage in the concept.

P.S. Points deducted for being able to land on the "surface" of Jupiter.