Submitted by Jovan Cahiles — 10 minutes, 2 seconds before the deadline
Add to collection 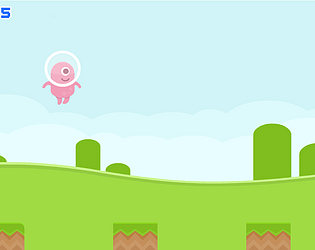 I beat the game, but BOY it was really hard. I had fun playing it, but there were lots of small things I think you could change to make the entire experience more enjoyable!
- Automatically restarting instead of needing to click "restart level" would have been really nice
- Making the trap hitboxes a little more generous would help out a lot since the game is so reliant on precision. If the player gets really close to the correct timing, then a slightly more generous hitbox would let them take the victory rather than getting frustrated with /almost/ getting it.
- The level order felt a little off. I struggled with the second level for several minutes, then beat levels 3, 4, and 5 extremely quickly.
- Maybe it's just a personal preference, but I'd really have preferred "up" to be jump instead of idle.
- Ducking automatically stands you back up after it finishes it, but this cancels any other inputs, which feels really bad. When I click "right" to stand and move right after ducking, it sucks that I stop and lose that input since the "stand" after "duck" still goes off. Probably duck shouldn't be timed, it should just stay ducked until you put in another command.

I hope that feedback is useful to you! This game is really enjoyable, and overall I think you did an excellent job with it!

hey, thanks for the review. I will definitely keep this in mind

I really like the idea of this game, but the controls could use some work. I pressed the space bar at the beginning of the first level and the character just kept jumping. Not sure whether that was intentional.

yeah, I agree that the control needs some more work and also yes the autojump is intentional

You weren't kidding about it being very hard! The controls were infuriating, but to be fair I suck even at easier platformer games. Music felt a bit repetitive, especially given that it resets on level over.

I forgot to set the size properly I think based on your video. It should have stayed to a proper size.
And yes, the controls were infuriating, and moving forward I will keep that in mind as those are the same things that others complained about the game. Thanks for the feedback.

The controls were really tricky to manage and the game starts off very difficult in that sense, without giving the chance to understand the controls really. It does look nice and the idea is great!

Thanks for the feedback! Yep, the controls definitely need some more work on it.

Nice graphics, very hard, at first I thought it was a troll submission but then i beat the first level and it went from there. You might have left the music playing along instead of resetting it with the level, that was getting annoying. The movement mechanics take a while of getting used to but play very nice with this concept :)

thanks for the feedback! Yes, I have to fix that music too.

Good work. I have some observations however. There's something really funky going on with the controls. They give a feeling of not being in control of the character at all. The character seems to jump again automatically after landing. Also at one point the game told me I've failed even though I had just begun and had not fallen to death. And one more thing, having to use the mouse to click restart gets really frustrating.

Thanks for the feedback. Yes, the initial concept of the game is that you don't directly control the character but I changed it however I didn't change the controls.  Also, yep I agree I should have put an easier way to restart the level.

Would be nice if you could restart the game from the keyboard. Maybe pressing "R"

Thanks for the feedback. I agree!

I like the artstyle of your game and the music is really playful, but I had a hard time dealing with the movimentation, I couldn't do more than 2 jumps without dying. It's a nice submission tho, good job!!

thanks for the feedback! Yep, I do have to put more work on the movement

The handle of the character was a bit wired (I could not manage to finish the first level. Maybe it was my own fault).

thanks for the feedback! Yeah, it needs more work on the movement part for clearer instructions.