HacknSlash Quest to regrow a small kingdom's forests
Submitted by blastmode (@BlastModeDev) — 19 hours, 36 minutes before the deadline
Add to collection 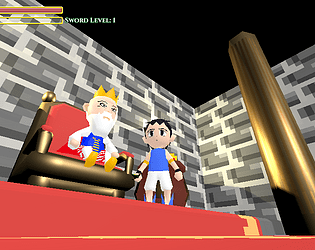 Neat world! I included it in my GoGodot Jam compilation video series, if you’d like to take a look. :)

Wow! This is incredibly impressive! The amount of world-building and the effort put into the 3D models is extensive and really wonderful! You can tell all of the work that went into this game! I found all fo the mechanics to work well and feel really smooth and polished! I love that you were also able to impart some humor as well! Really nice job and great game!!

Controls, camera movement and combat feels smooth and polished, although the latter ultimately amounts to mere button smashing as there's no way to block the attacks and nowhere near enough anticipation to avoid them. Overall a good experience regardless!

The 3D models are neat and the animations phenomenal. The combat flowed a lot better than I expected. I also liked how the sword grew physically, not only in levels. My character dashed a lot even when I didn't even try to do it so maybe dashing could have a different key binding than double tapping a direction. Awesome entry for the game jam.

But on my Mac, got a damaged file error. I guess it's from generating the game from a PC.

This is what fixed it on my Mac Running Catalina.

In the terminal I typed:

With a space after it.

Thanks for playing and posting this fix! I'll add that info to the game page.

I liked the game, and my favorite part is the straight forward jump. It looked really satisfying :)

I liked the game, and my favorite part is the straight forward jump. It looked really satisfying :)

I agree with most of Sosasees points. I think the walk vs roll determination should be tweaked too. I died more to that in platforming parts than I ever did to enemies. I dug the music. Its definitely a game to continue working on.

Thanks! True, the double tap window might be too large. I'm glad you liked the music.

I loved this game! So relaxing to play and beat up those weird spider monsters. Reminds me a bit of dark souls, and the models and textures are so great. Love the low poly nostalgia.

Awesome! Move your mouse capture script to the _input function!

Thanks! I'll try to do that next time.

I liked the game idea. The game is good, but a few small things could’ve been different to make it much better than it already is:

But reguardless of the criticism, these issues didn’t really make the game any worse for me. I had a good time with the game, and that’s what matters.

After the Subpar Lighting in the Garden, the use of light becomes actually beautiful, like an artistically abstracted A game.

I hope this critique will help your future games become even better, but I can feel that this is already a Strong start.

Thank you for the helpful critique! I agree with all your points. You do lose some XP and gold when you die, but yeah it's very forgiving. I'm glad you had a good time.

Very nice game, though I couldn't find a way to buy anything with the coins from the king.

Thanks! You have to either press E (W and S to selected between options and the default Godot blue border for buttons shows up) or use the mouse which is invisible. Unfortunately, I didn't have enough time to make those menus nice and polished.

Legend of the Evil Tree is great! It looks like the beginning of Ocarina of Time!