3D vacation platformer where you collect bugs and soothe an angry heron god with fish
Submitted by jakeonaut (@jakeonaut) — 20 hours, 31 minutes before the deadline
Add to collection 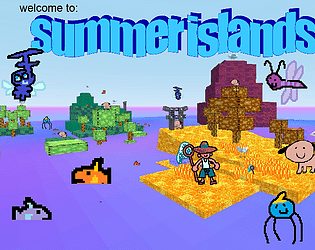 Neat world! I included it in my GoGodot Jam compilation video series, if you’d like to take a look. :)

Awesome! I remember when you played my game for GameJolts glitch jam forever ago! Glad you're still doing this :)!

Really like the style and gameplay, wish there was more music. I've found a bug that allowed me to fly, but because of the overall construction of the game i thought it was intentional XD Overall great game, first time i gave 5 stars for gameplay on this jam.

We've talked more about this game in this video!

To be honest I did not know about that bug, but it makes sense, are you jumping and then throwing and catching and spamming jump? I think it's a pretty cool bug... I won't remove it :) Thank you for the feedback!

Nice style and atmosphere, loved the birds getting excited for the fish! Didn't get much further than that tho because I didn't understand what I had to do.

the tutorial could use some polishing for sure :) thanks for the feedback!

Very nice blend of 2D and 3D. I like the world and the characters you have made. I couldn't find a way to exit the game from the pause though.

ah, sorry yeah, the only way to exit is by closing the window. thats probably a good thing to add!

I really liked the aesthetic of the game, particularly the heron model, but I wish there wasn't a time limit. The vibe of this game just made me wanna relax and explore.

Submitted
Legend of the Evil Tree
LikeReply
jakeonautDeveloper112 days ago

Thats a good recommendation :)! I will probably release an update with a longer time limit and option to turn off the time limit as a "vacation mode", thanks for the feedback!

I'm really digging the art style and the whole vibe, but it's pretty difficult to play the current version of the game because of controls and camera. I managed to get to the 4th heron on my I think 4-5th run, and I had only 60 seconds left which was not enough to realize how to use this new air dash, and where, and what to do with my new size. And I really wanted to complete the game, but gave up on that moment. Anyway, the gameplay and visuals are great fun, did you use normal maps images to texture water and that <wtf>heron </wtf>of doom?

Yeah, I think I made the time window a little too tight, and the camera control is especially difficult on the web version because I didn't know how to capture mouse so I just disabled it for camera navigation. I have a newer version (which I don't want to release until after jam voting to align with the rules), that fixes some of these issues.

Thanks for playing :) and yes hahah good catch those are water normals! I thought they looked cool

A really interesting game. The only thing is that I'm no longer used to using the keyboard arrows to move the camera and this put me in a bit of trouble hahaha

I followed your development on twitter. It was cool to see your game grow and finally get to play it. I had a lot of fun with it!

I saw that :)! I think I followed you back! I saw your magical tree defense game growing yourself :)!

Unfortunately, you not only captured the good aspects of this kind of game (Graphics, Sound Effects, and Artistic Direction), but also the poorly-aged controls:

Also, the tutorial (or lack thereof) makes it very cryptic to advance past the starting island: I didn’t know about the Camera Controls until I quit the game and then saw the screenshots again, and then restarted the game, and then hit an arrow key with he expectation that it’d also move the character in the same way as WASD would.

After the starting area, the game becomes fair with the hints (they’re still well-hidden but reasonable to find). But before that, I might’ve missed entirely that the game actually has any content after the starting island, and would’ve moved on thinking it was just an art demo, and would’ve given it a much worse Game Jam rating (but not any worse Regular rating) as a result.

Looks like you double posted so I deleted the repeat.

Thank you for the feedback! I am very happy to be compared to an obscure PS1 game (that is actually the style I am going for in general :)

As for the controls, I super agree with you. If I revisited this game and also for games in the future I will look into implementing settings for controls, to be honest I have never messed around with it, but I agree it would make it much more accessible. I especially find underwater navigation near the surface very janky, and agree with you on the mid-air jump. It was hard to find a way to balance it with the triple jump you can unlock later, so I probably should have changed what it was.

I tried to have the starting dog NPC prompt you to move the camera, but he does it only in specific circumstances where you talk to him after flying with the heron and collecting the zora boots but before feeding the second heron. That was a bit of a bug on my part, but regardless early controls should definitely be better conveyed.

I'm glad you got through the starting island despite that, and am very thankful for your feedback!

I liked the wacky visuals a lot. Gameplay is solid. Congratulations.

This is trippy and interesting.  Great entry!

Okay, this was actually really cool (and yes, I did talk to the dog instead of running).