Run, jump and slash with the right color!
Submitted by NaX 89 (@nax__x) — 11 minutes, 20 seconds before the deadline
Add to collection 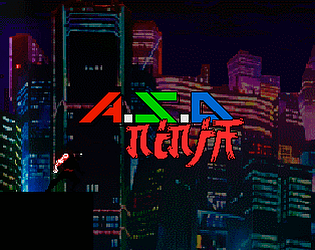 How does your submission match the theme?
Energy to attack also works as lifes, when you moves (to dodge enemies) the energy refills.
Sword Attack will damage enemies and deflect his bullets, working for attack and defense.
Jump on enemies to reach higher platforms and to get color energy.

Too late to rate it :(. I liked this game. Walking and jumping felt really good and precise. As Eric said down there, increasing the range of the attacks would definitely be a good thing, I kept hitting enemies when trying to attack them. The enemies felt a bit unfair though, I wished they couldn't shoot upwards when I'm trying to jump on them. Really liked the visuals as well!

Noooo, I was one minute late from being able to rate your game! The game itself was pretty cool visually, and the energy system was certainly interesting! That extra layer makes that game a bit more challenging. The combat's pretty tough, too, as you have to move close to the enemy to use your sword, and you can't attack when you're actually inside them... All in all, an interesting experience~

Nice game! I have just some suggestions to make the gameplay feel more fluid:

- Increase the range of the attack. Now, it's hard to get close enough to the enemies without touching them.
- Automatically moving X pixels forward when attacking (feels more powerful)
- Don't get hurt by stunned enemies.
- Feels unfair when the bullets pass through the walls.

I tried a lot of times, but I was not able to finish the game =P

Pretty good.  The music was a little annoying.  A interesting idea.

Wow, cool idea to have movement tied to recharging! A lot of really nice concepts here - being able to reflect bullets back, stun enemies by jumping on them, gaining energy, and having that energy tied to your health; as far as game design goes, this game is very well thought out.

There are some technical issues though; I wasn't expecting enemies to be able to shoot me through the floor, and the interlocking systems take some getting used to which meant I was repeating the first level a fair few times.  I think these mechanics could work well together, but that the player needs more feedback for when they attack, when they get hit, for when they're low on energy, but given the sheer amount of ideas put into this game, it is likely  that these weren't included due to a lack of time.

I'd be interested to see this concept develop further, but what there is now as an interesting little game. :)