Thanks so much for the kind words! I hope it's useful when you do get to downloading it!

Aw thank you so much! I've got a habit of revisiting old ideas, I don't doubt that we'll be seeing Red again sometime soon!

Already given it a look - thanks for playing!

I've turned a lot of my jam ideas into full games in future, so maybe I'll do the same with this later! I certainly enjoyed working on it and people seem to be liking the result. :D

Yeah, I think if I had more time I would definitely be including a tutorial.

Thank you! I'm glad you enjoyed it!

Ha, thank you! ^_^ Not much you can really do with two frames but I tried my best.

Aw thank you! I'll definitely take that on board for my next game.

Awesome. :) you can be sure to see me around on there soon!

No, actually! Like I said this was my first game with Bitsy but I'm loving what I'm seeing so far, so I'd definitely be interested in joining!

Oh thank you so much!! I played A Day In The Life Of A Sea Witch and loved it - it was so sweet and well made and I have no idea how anything like that is even possible in Bitsy but I will be aspiring to it next! ^_^

Hi there! The Elementalist is my new commercial game: it’s a hardcore action platformer where you will find yourself in a number of different combat arenas fighting tough hordes of enemies as you discover the story of the Kingdom of Reprobi piece by piece.

If that sounds like something interesting to you, it’s 10% off making it $4.49 for the first 24 hours after release, so, yeah!

Game page: https://morgangb.itch.io/the-elementalist
Twitter (if you want to see some gifs): https://twitter.com/MrMorganBrown

I just released my new game, a speedy arcade style shoot-em-up about forging a path for humanity to colonise a new world after Earth is destroyed. It's my second attempt at a commercial game project, but if you don't want to pay full price that's cool; there's a free version with a few missing features, or you can get the full DX version for $0.99 along with a manual.

This is the release trailer:

And you can find the game page here:

Thanks! I'm really excited about this one so I hope you enjoy it!

Hi, I'm really glad you liked the original Ninja Boy, and I hope you'll be pleased to hear that I've since expanded it out into a more sizeable game! It's 20 levels long, the first 3 of which are available for you to play in the browser, so please give it a go! I'd love some feedback - https://morgangb.itch.io/ninja-boy-returns

Since the jam game came out, I've been expanding on this idea, using that dash mechanic to create something much bigger - Ninja Boy Returns! The first three levels are free for you to play in the browser, so please give it a go! I'd love to here some more feedback - https://morgangb.itch.io/ninja-boy-returns

Hi there, since Ninja Boy came out I've been working on a follow up - a more expanded version of the same core ideas - and it's out now! I hope to have fixed those issues with the level design, and the first three of the twenty new levels can be played for free in your browser. Give it a go if you're interested - https://morgangb.itch.io/ninja-boy-returns

Hi, I know you liked Ninja Boy, so I thought you might be interested in Ninja Boy Returns! It's an expanded version of this jam game, with 20 levels, including boss battles, a speed run mode, and even a co op mode! You can give the demo a go in your browser if you're interested! https://morgangb.itch.io/ninja-boy-returns

If you encounter any issues with Ninja Boy Returns, please let us know here so that we can fix it as quickly as possible.

Any advice for other players? Need some advice? Then here's the place to look! Just post a reply to this topic with your question/advice.

Hey there, and thanks for checking out Ninja Boy Returns! Here we'd like to collect your very best speed runs, so post a reply to this thread with a video of your play through to show us.

Hey everyone, I just now released my first asset pack! It's my first try at something like this, and also my first commercial project, so I'm really interested to hear feedback! 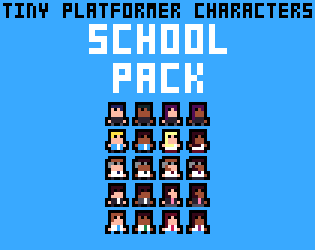 Yeah, there were a lot of little annoyances that ended up in the final product here due to the time frame and also my lack of ability in some areas, but I'll definitely be working to improve them for future games.

Thanks very much for playing! I gave your game a try too - very cool stuff!

Wow, cool idea to have movement tied to recharging! A lot of really nice concepts here - being able to reflect bullets back, stun enemies by jumping on them, gaining energy, and having that energy tied to your health; as far as game design goes, this game is very well thought out.

There are some technical issues though; I wasn't expecting enemies to be able to shoot me through the floor, and the interlocking systems take some getting used to which meant I was repeating the first level a fair few times.  I think these mechanics could work well together, but that the player needs more feedback for when they attack, when they get hit, for when they're low on energy, but given the sheer amount of ideas put into this game, it is likely  that these weren't included due to a lack of time.

I'd be interested to see this concept develop further, but what there is now as an interesting little game. :)

That's all fixed now! Thanks again for pointing it out!

Thank you very much for the positive feedback! :)

Thanks for pointing it out to me - I'll look into that and try and upload a new build as soon as possible!

Thank you so much for taking the time to play it! I really appreciate the feedback, and agree with a lot of it. I've never been so good at level design, especially when it comes to building around a single idea, and even felt myself that a lot of the sections were quite finicky or needlessly hard.

I should have picked up during testing that the end of the level wasn't clear, and should also have figured out that it wasn't clear enough to the player that the box was an indicator of the length of the dash. However, I am very glad that you think that the core mechanic is strong - I felt this way too, but my level design and overall design in other areas didn't showcase it very well. This game definitely needs improvement, but thanks to you, I know that it can improve, deserves to improve, and how to improve it.

Wow, this software is great so far, but I had a specific colour palette in mind I wanted to use. Is there any chance that a future feature could let me set exact hex or RGB values for materials?

Super fun! Feels great, tense, challenging, and exciting to play; gives great feedback in graphics and audio every time you shoot or hit something, which is the best thing to have in an action game.

Simple concept, but very fun to try and get the timings and stuff right!

Feels great; nice and simplistic, though it would have been nice if the core mechanic was developed a little as the game progressed. Graphically it was very clear and close to gameboy restrictions, as well as giving everything a cute aesthetic. Only thing I would say is that the use of the mouse as the main means of control went against the gameboy restrictions, but not using the mouse would have meant sacrificing the gameplay, and it's clear that the right decision was made by putting the gameplay first :)

Felt, looked and sounded like a gameboy game, but the gameplay challenge ramped up in quite large increments it seemed, but occasionally repetitive. However, he things that hurt you and the things that didn't were easily distinguishable, so it was never due to dumb mistakes that I lost a life, just being unable to meet the challenge, making it challenging but not frustrating, which is very difficult to pull off.

The writing here is strong and quite humorous in a fourth wall breaking, self aware; serves well to keep the player interested in The Mystery of the Space Badger Mystery, and the almost metroidvania design of the game as a whole serves it well, having a player return to earlier areas as they unlock new abilities, even bringing it full circle in some places.

Great feeling, style, graphics and sound to the whole thing; very well executed and good looking, despite the limitations! More rooms would be nice, but that's my only criticism to it.

If you're looking for another jam game, I'm currently planning on making something for the upcoming Utopia Jam (https://itch.io/jam/utopia-jam) I'm just not sure what yet.

I'm really glad you liked the game! Thanks for the feedback!