Luck of the DrawView game page

See if you roll luck dice as you then fire them at your enemies.
Submitted by GuhMan — 2 hours, 28 minutes before the deadline
Add to collection 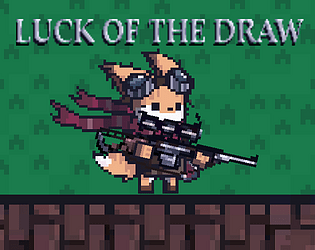 Luck of the Draw's itch.io page

How does your game fit the theme?
The bullets from the gun are dice that roll damage.

Cute game. I thought the feel of the gun was good. Wish there was some music. Aside from that, great job!

Learned how to move, collected guns, used them to kill evil cards, then collected some more guns and used those instead to kill any evil cards that escaped my bullets on my first watch.
That until I found a strange portal which captured my strength, and saved the cards from my wrath..
..but hey, at least that UI person told me that I won, so that's something!

Just wanted to share that recently discovered that one thing that can add a lot of fun for the player in this kind of games is right click to roll, would totally recommend for your next game if it's similar :P

This is the first game I played where you could actually pick up weapons and swap them. You even have different kinds of enemies with different attacks.

I don't think that the theme was used effectively. Yes, the guns deal different damage every time, but so do a lot of RPG's. Why would we need to worry about how much damage you can deal if you can always outrun the enemy?

Submitted
Windy with a Chance of Tornados
LikeReply
preposterous_productionsSubmitted72 days ago

Cool art, would have loved to see some animation to it (but 48 hours is though). One thing, i think that the gun is overwhelmingly superior to the shotgun, might be worth it to work on the balance a bit.

Submitted
No Clothing for Old Men
LikeReply
OxVoltSubmitted72 days ago

I liked it, very nice sprites and very cute player.

It lacks some animations but it's quite understandable for a game created in 48h.

Submitted
Roll in The Dungeon
LikeReply
Gamer HangoutSubmitted73 days ago

Really fun! The camera and weapons work very nicely in this one (:

The pixel art is pretty good. I had a fine time with the game. There were some guns that I just didn't see a use for, but I love the one where you fired two at once and the starter gun. I would love to see this expanded.

I really liked the art, I thought it was really cute.

I think the different guns could be more unique (or more balanced). The sniper was just by far the worst weapon in my experience, the only upside is that it doesn't give carpel tunnel. Maybe the sniper could have a larger range (could look further away).

On the note of range, basically none of the enemies posed any threat since even the or shotgun far outranged them already (which made the sniper even more useless). Maybe make them faster, knockback resistant (knockback also made the pistol really OP), shoot faster, etc.

the fox fella is the litle tiepnsy! so adornale and cutest tootsit! i like the art its cute

Well I think you did 15/15. Art is fun and crisp. Sound effects add a lot. Wish there was music but thats ok. Concept kits home well. I think having every shot vary is a cool take but probably would have had it be on every reload instead of every shot. Still I enjoyed my time. Keep it up. Would love to hear what you think of our submission.

Enemy design is really cool! Unfortunately, the dice that roll damage feels like it was put there just to fit the theme but besides that it was neat demo

Cool game! Seemed like the pistol I picked up at the beginning was better than anything else, so I used that one all the time. Also, nice art!