An Ice creature trying to escape his own dungeon.
Submitted by RestartGame_ (@RestartGame_) — 23 hours, 41 minutes before the deadline
Add to collection 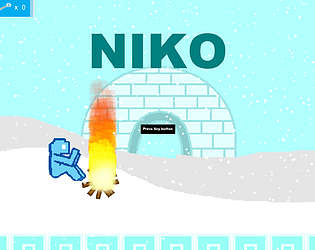 Have you participated in game jams in the past?
This is the first one :-)

What stopped you from joining the official jam?
Submission problem

Will you be participating in the next GTMK game jam?
yeah

Very cool platform game. Just I think the player is to close to the rock and after a lot of retry it can be frustrating to die directly.

But very cool game for a first Jam :)

Yeah I know :-) Thank you very much for playing the game! I am happy you enjoyed it. I've been receiving a lot of feedback about the rock in the beginning. In the new version it will be fixed. Stay tuned!

I kept trying to grab that trophy at the start by outrunning the boulder, before I had a "Eureka!" moment and realized I could grab the ledge, wait for the boulder, then drop back down. That was cool.

Submitted
I Am Not On Fire Yet
LikeReply
RestartGame_Developer268 days ago

I'm happy to hear you got passed that point :D
There will be updates, stay tuned!

This is really fun!  I like the ideas behind the game, and the art and music were nice additions.  The level design was really solid - I can tell you put time into making sure that all the jumps and hazards were spaced out just right.  I also liked the wall-hang mechanic, as it added a valuable layer of complexity to movement and gave the player a moment to look around and plan their next action.  The grappling hook was a neat idea too, but I didn't end up needed to use it anywhere except for the area it taught me how to, so it would be nice to have more areas where it is necessary to progress.   The only issue I had with the game was with difficulty.  Most of the difficulty was actually really good, but there were a few sections that were needlessly punishing.  The main problem is right at the start, as the player needs to immediately start moving to avoid getting hit by the boulder.  This was kinda frustrating, and it would probably help to give the player a bit more time.  The only other difficulty problem I noticed was that some of the hazard hitboxes seemed a bit too large, and I found myself being hit when it appeared that I still had space.  As a general rule, it is usually best to make hitboxes slightly smaller than the actual hazard to give the player benefit of the doubt and let them pull off close calls more often.  Other than those minor things, I had a lot of fun playing this, and I'm impressed that you were able to put it all together in the short duration of the jam.  Congrats!

Thank you so much for playing and for the feedback! I am very happy to hear that you enjoyed playing my game and that it was fun.
I definitely will work on the hitboxes. There will be updates. Stay tuned :-)

Hi there :) I am really bad at platformers and don’t like most of them but the grappling hook idea is fun! Can you use it on any wall or just that grey one?

I could not test the grappling around much because it was hard for me to get to the point where to use it and would die when I try to get up that wall.

I think including a short tutorial area/level where you can play around to get a hang of the controls would make it really nicer for noobs like me :) It gets frustrating a bit too quickly, the difficulty and learning curve starts at 50% instead of 0% :D

I feel the hitboxes could be easily more precise. Like that boulder feels more rectangular than circle (or maybe the character’s hitbox is too large).

It’s good that you implemented this automatic platform grabbing. Platformers feel much better if you spend time implementing player helpers like this that make them do the action their brain tried to do, but slightly failed (jumped a little too late or too early). Dead Cells has a shit ton of that in platforming and even combat, and that’s partly why it feels so good to play!

Thank you for playing and for the feedback!

Yeah it could be fun if you could use it anywhere, but at the same time it gets more complex to design levels where you also need not to use it! Maybe you can play around with a limited range and a maximum amount of time you can stay hooked!

Yeah I'll definitely consider that as an option. Thanks!

It is fun once you get the hang of the controls but I couldn't progress after the first check point. I peaked but it didn't show me any grappling points to get to.

I am happy to hear it was fun, because I was mostly aiming for that :-)
After the checkpoint there is no need to use the grappling hook anymore. You just have to keep climbing.
It is still incomplete though, after the rating phase I'll upload an update with complete maps and hopefully turning this more fun.
Including enemies you can shoot with the grappling hook (where the projectile is going to be the characters arm)

cool looking forward to it. I managed to complete it now. Probably died liked 50 times. A death counter would be a nice addition to the game.  I can now use the grappling hook to escape the rock without jumping.  It feel alot like cat mario in terms of gameplay. When I went to get the  2nd tropy and died because of the spikes I just loled.

A bit tough) As said before - give player a little more time before the boulder hits him, at least to figure out what is happening. I also think that two buttons for firing the grappling hook is too much, got confused trying to move and aim/shoot the hook simultaneously. I liked the idea of escaping the dungeon, it felt like some Indiana Jones movie)

haha indiana jones movie, I love that! Yeah the boulder will be set back more in the next update. After the ratings.
For now I hope you had fun playing it and it was funny :D

Well, I got squished a lot of times, but the squishing effect and how things move around made it really funny. I wish I had more time to figure out how the grappling hook works, sadly I couldn't get past that out of control boulder. Good job on your first jam :)

Thank you so much! I am happy to hear that you found it funny :D It was meant to be on one hand and on the other hand, challenging.
But I guess the boulder is too close to the player. I'll fix that. thank you again for playing.

This one was a bit tough for me to play, I might recommend giving the player just a little more time before the boulder starts moving at the beginning of the game? Besides that, this is a neat idea and the little extra trophies are a cool touch!!

Yeah haha. Thank you so much for the comment! This game is even tough for me to play still haha. I'll definitely update the game with your suggestions, the boulder totally is too close to the player in the beginning. Stay tuned.