Firelight is a platformer in the dark. Hold your torch, or fight the enemy!
Submitted by sneakilli (@sneakilli) — 2 hours, 4 minutes before the deadline
Add to collection 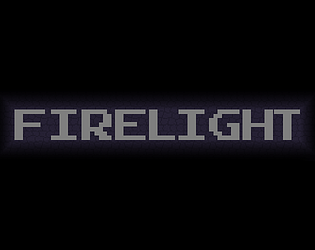 I really liked this it has a good concept that has a lot of potential.

I don't know what it is about throwing things as a mechanic in video games, but something about it always makes me like the game more. Though yes attacking could have been faster, it was interesting to juggle between the torch and knife!

Thank you for the feedback! The combat was a little rushed I'll admit. I'm hoping to approve it in the future!

This is really cute. Agree with the previous commenter that the torch feels great, but unfortunately the knife less so. Combat feels a bit too clunky for a game where killing enemies is a requirement. The game could also use some kind of checkpoint system, or just restart from the current level instead of from the beginning.

Still, I think this is a really unique take among the "only one light source" entries to the jam I've seen, especially since you can retrieve the torch and since you have to place it strategically during combat so you can see what you're doing.

I think with a bit of juice for player movement and combat interactions, this could be fantastic!

Thanks so much for your feedback! I 100% agree with all your points, it's all stuff I'm looking to improve upon :)

Thanks so much for your time!

10/10 Would get lost in the dark again. Very cute and the torch physics are fun and clean! Even though you give me the entire power to look down I cannot ever remember to do that and I fell to my death many times. I love it!!

Thank you for your comment! I'm glad you liked it ^-^

Cute game, i liked the feeling of the torch a lot -  and found myself squinting at lot in the dark ahah

Glad you liked it! I really wanted to make the player feel lost in the dark, I'm glad that worked somewhat. Thanks so much for the comment!

I really like this mechanic with the torch, throwing it and being able to force pull it back. I felt very powerful :D It was fun just holding down right click and letting the it fly around me like a firefly. The enemies are a good level of difficulty and having to throw your torch away to fight is a nice touch, that's a nice way to impliment the theme. At first I would just throw my torch away and as I got better I would be more strategic with my throws and pull it back towards me as I need it. Nice use of sound, nothing too intense, the airy water drips really suit the scene and tone of the artwork. Wonderful work :)

Thank you so much! I'm so glad you liked it ^-^ I really appreciate your feedback!

Really like the design, my favorite part was torch behaving like boomerang, so fun to play with it.

Man, the design in this game is great! I had a little trouble at the start because I didn't know the controls (my fault, I should've read the description), but after I figured them out, the game was a blast!

Thank you so much for playing!! I should've put some tutorial stuff at the start of the game it seems :p