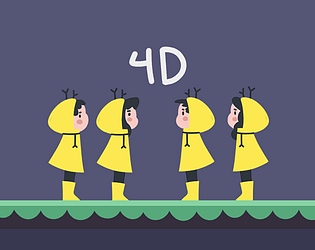 I really like the concept and thought it was challenging, but after many tries it just became frustrating. Killing even one person means you've essentially lost, so you have to start over. I also was really annoyed that the back of spikes (which look like walls) still kill you. I was excited to play this one and I think with some more polish and a slightly lower difficulty/dependency on perfect-length jumps, this would be an amazing puzzle game.

Submitted
Roll With It!
LikeReply
vurpulvereizerSubmitted164 days ago

Similar concept to our game! Difference is that we went with a turn-based top-down puzzle game and only 1 level is visible at a time.

Cool game, but sadly I did not even make the first level there's a lot of things you need to focus on. Some easier tutorial levels might be nice! For example the spikes and moving platforms could be introduced in a later level. I also don't get what's the point of continuing playing when the 1 of the players died.

Really cool idea, others have mentioned the difficulty, perhaps it would be cool if the tutorial was the first couple of levels, and the first 3 levels must be done with 1, 2, then 4 kids. (I know you ran out of time, games are super hard x) ). Really cool concept though, nice and original, love the characters.

Nice! Very tricky. As others have said, the collision could be better: the hitboxes on the spikes feel a little too big, and it would be good to have some visual indication that all sides of the spike blocks are deadly.

Being able to press 'R' to restart would have been nice: I had to go to fullscreen mode because the game didn't fit on my screen otherwise, but then pressing Escape would quit fullscreen. So to restart, I had to hit Escape twice (exit fullscreen, then restart the level) and then click the fullscreen button again. I did eventually find a way to scroll my screen just right so I could play without needing fullscreen, but...

But yeah, a nice little puzzle. Kind of like some of the puzzles in The Swapper. And the art is cute.

--Josh (part of teamwintergreen for the jam)

Ahh, that Escape situation sounds like a pain. Sorry you had to go through that! I ended up without enough time for a propper UI which I was planning on using and heard of of similar problems in playtests as well (or people not knowing what button to press at all). I'll stick to 'R' in the next game. I'm glad you think it's nice though and that you like the art. Thank you for the feedback :)

Fun idea. Too bad the platforming is that harsh (those block pikes killing you from every possible angle are RUDE).

Hahah, very rude indeed! I was going to add a difficulty switch but I ended up without enough time *shame* Glad you like the idea tho! :)

It's a good game! Though maybe a bit too tight. It reminds me a bit of the NES games which can be way too hard sometimes. But I did enjoy the game and I couldn't give up. I wanted to finish the game properly. The design overall is solid and could very easily introduce new mechanics or puzzles which need a different approach! Well done!!:D

I really enjoyed playing this! I think it's a great application of 'only one (control input for four different realities)' which fits the alternate dimensions theme really well. It was challenging but I was compelled to play until I completed it. Would love to see more levels where you could introduce more mechanics - what if a button pressed in one world effected a change in the others?

Really great concept, with more levels I think this would be a fantastic puzzle game!

Ahw, thanks! Maybe once in the future ;) I'll let you know if it happens hehe

This is amazing! The connection to the theme is a bit iffy but this is a really engaging and difficult puzzle game that is relatively self explanatory. Overall? 10/10 would play again.

Aaah, thank you for the feedback :) Really appreciate it!