A Gardening Like Boss Rush
Submitted by Flowt — 3 hours, 44 minutes before the deadline
Add to collection 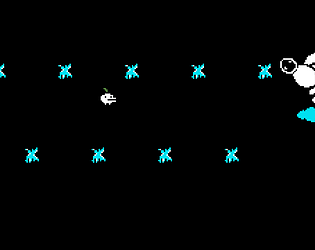 I can't really add much to what was already said. Maybe some kind of warmup animation before attacks (or any kind of hint) would've helped. Watering was nice, as it was a double-edge sword, but I don't think it was properly implemented, because all you needed to do was tap slightly to have a wet spot in front of you to block projectiles.
Check our game! https://cerosware.itch.io/one-stick-shooter

As I agree with most that was already said about the game design (I haven't even gotten through the second electricety stage ;D ), i would like to say that I really liked the art of the game! I normally dont like pixel art, but probably the really simplistic (even retro) approach made it really work for me, great job! Another game design aspect though, I was missing a bit of hit feedback. I just didn't know if I was damaging the boss (that or i just didn't hurt the boss, also a possibility xD)

Wow! This was a darn fun game - of course there are a few oversights in design and balancing, but apart from that: fun game!

The watering great, but the enemies are just way too fast, or I am to slow :)

To be more precise I think this boils down two three things: 1. they spawn out of nowhere and sometimes directly in front of the player. 2. they accelerate very quickly which is something humans naturally can't handle well. 3. They start to move far too quickly after spawning. This all combined makes it very hard to pick up the patterns of the enemies and thus reacting to them. The only way I got a little bit further was by remembering the patterns from my last run.

Submitted
Divided are we strong
LikeReply
FlowtDeveloper236 days ago(+1)

Thanks for the well articulated feedback! I think the difficulty for this project was too high as well, and I agree with everything you touched on.

I had the projectiles come rapidly to incentivise players to use the watering can, but looking back it was still too fast.

I tried mitigating the instant deaths from recently spawned projectiles by disabling the colliders for the first few frames, but I don't think it was enough. If I had given myself more time I could have spawned them at a much lower scale and sized them up before adding velocity.

Remembering the bosses pattern is one of goals I wanted players to learn. Though, I definitely became blind to the difficulty as I made and playtested this jam much longer than any player is expected to.

Really fun, tight controls and clever mechanics. However the only gripe i have is that you at some points dont really have time to react to the attacks as they  will just spawn right where you stand or fly out at the speed of light. Nice work none the less!

Thanks! The boss was the last feature I added into the game so it didn't get as much love and balance as it deserved. I'm going to use this as an opportunity to learn for the next time I make a game and put more effort into boss design. Thanks for the feedback! <3

Very clever mechanic! It took me some time to figure out how to defeat the boss, and once I got it, I kept annihilating myself in the process... It was doable, though! Great job on this!

Hey thanks for the feedback! I wanted to make somewhat difficult because of how short it is.

Neat! I like how the water acts as a hazard and a help.