A simplistic game with only one control: the space bar.
Submitted by iceteaandstickynotes — 11 hours, 9 minutes before the deadline
Add to collection 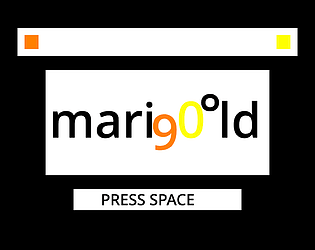 This is a fun game I really liked the mechanic nicely done :D

Good level design, Tricky Mechanic, maybe it will help to add more visuals to get which direction you are aiming at. Good job!!!

Good idea, I might give the orange square little eyes in the future   👀Thanks for the feedback :D

Since we only use one button, it really fits the theme. The visuals could be better, but that is not huge complaint since they suit just fine. Having sound effects and music would a lot to this game. The level design is best part of this game.

The only part I didn't understand fully was how to change directions efficently (like when I'm moving horizontally, pressing the spacebar makes me walk in the other direction horizontally and not vertically), so it has really hard to progress through the game. Could you explain to me how to do that?

I tried to design the levels so that how the moving system works would come to the player naturally, but every time you press the space bar, the orange square changes directions 90 degrees clockwise. However every time you run into a wall or blue spot the orange square starts facing the other way, which might be what's making it a little less intuitive. I would have added sound effects or music but since in the jam description Mark says that that's not as important I made the decision to add that afterwards, so the music and sounds wouldn't feel rushed. Thanks for the compliment on level design though :)

LikeReply
Oath of the UndyingSubmitted1 year ago

Took a few attempts to get it to play but it was really interesting when it did. I think using a different button instead of space might help with that issue.  Really interesting take on one button controller.  Good stuff.

Hi, thanks for the compliment! :) I might change the button later but I'm not sure I'm allowed to change it until after the jam is over.

It took me a few minutes to get the hang of it, but once I did it felt pretty good to play. I found getting stuck the short-way down a corridor was tough to get out of, it was best to just reset and start from the beginning.

Some of the levels though start with you being stuck the short-way in a corridor, and the only way I could find of getting out of that is to hold down the spacebar and let go at a random time, hoping that it would now be facing the right direction. When I tried to double-tap space I wasn't fast enough and had already hit the other wall. Holding down space seemed to be the only thing that worked, but it seemed like the wrong answer, was I missing something? 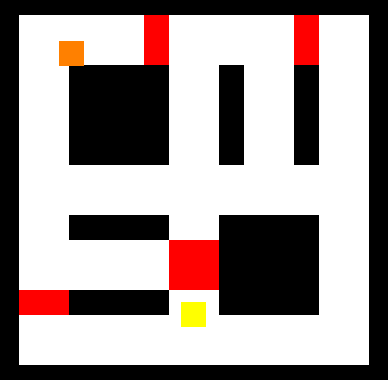 This is the level I got stuck on, managed to get out of that top corner once or twice, but just ended up hitting another red instead. It's a creative idea, and when I got into the flow of some of the early levels - really satisfying. I think there just needs to be an easier way to get yourself out of being stuck in a narrow bit.

Submitted
Only One Recruit
LikeReply
Team HorseheadSubmitted1 year ago

Oh, and I think I did a poor job explaining what I meant by "short-way" but it's basically *this* direction.

Hm. I didn't mean for that section to be that difficult... Okay, I'll redesign that level to be a little easier. Thanks for the feedback!

Wait, am I allowed to do that before ratings are over?

Uploads are locked until the submissions are over, so no updates until then unfortunately!

Aww, that's too bad. I'll update it on Tuesday then :)

This was fun and challenging but also satisfying when you "mastered" the controls!

Thank you! I tried to design the levels to give you that experience but I couldn't be sure I got it right since I only had a few test-players. Glad to see it turned out right! :D I enjoyed your submission as well, and I think it'd be super cool if you expanded on the idea :)

Thank you! Your submission was awesome too! :D

You definitely stuck to the theme. It reminded me of those key pusher arcade games where you have one button. This game was challenging and fun. Good job