Whiz is a platformer game where you control your character by shooting only
Submitted by Xerise (@yousfimwalid) — 1 hour, 2 minutes before the deadline
Add to collection 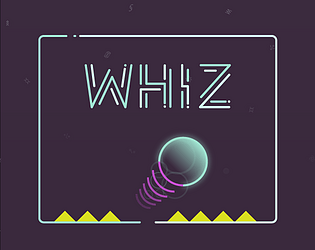 Cool game. It's a pretty simple idea, but you executed it very well which is what matters.

It's a very visually appealing game with the simple, but beautiful neon, geometry wars art style. The extra effects on your shots, the background, spawning, completing the level, dying, etc, etc. really give the game a lot of polish and make it feel complete.

Your level design for the most part was very interesting. The levels all felt like they had something new to offer, not just a rehash of a previous level. The levels played a bit like puzzles in the way that you had to figure out what to do before you even attempted to do it. This game reminded me a bit of the game N(or N+ or N++) with the puzzle-like level design and especially the enemy that shoots at you. The levels did tend towards being a tad too difficult and like they had too much going on in them, leading them to fell unfocused. Take level 17 (I think)(see below) for example which I have dubbed "Gauntlet". The main obstacle of the level is to get through the gauntlet so to speak. You need to drop down, run away from the enemy shooting you, but then at the last moment, propel yourself upwards to avoid the spikes and then make it to the exit. Except the exit is locked. So then you just have to go push the pink block from the right onto the button to the left and fly back to the exit (not even needing to take the gauntlet a second time). I think the pink block on the switch is largely unnecessary here. Sure, maybe once in a while a player pushed the block to the right, then realizes the box is stuck and then needs to restart. Or a player is so good, they can push the block to the right, get under it before it hits the ground, catch it, and push it up and back over the ledge to the left side, but I think that is a little far-fetched. 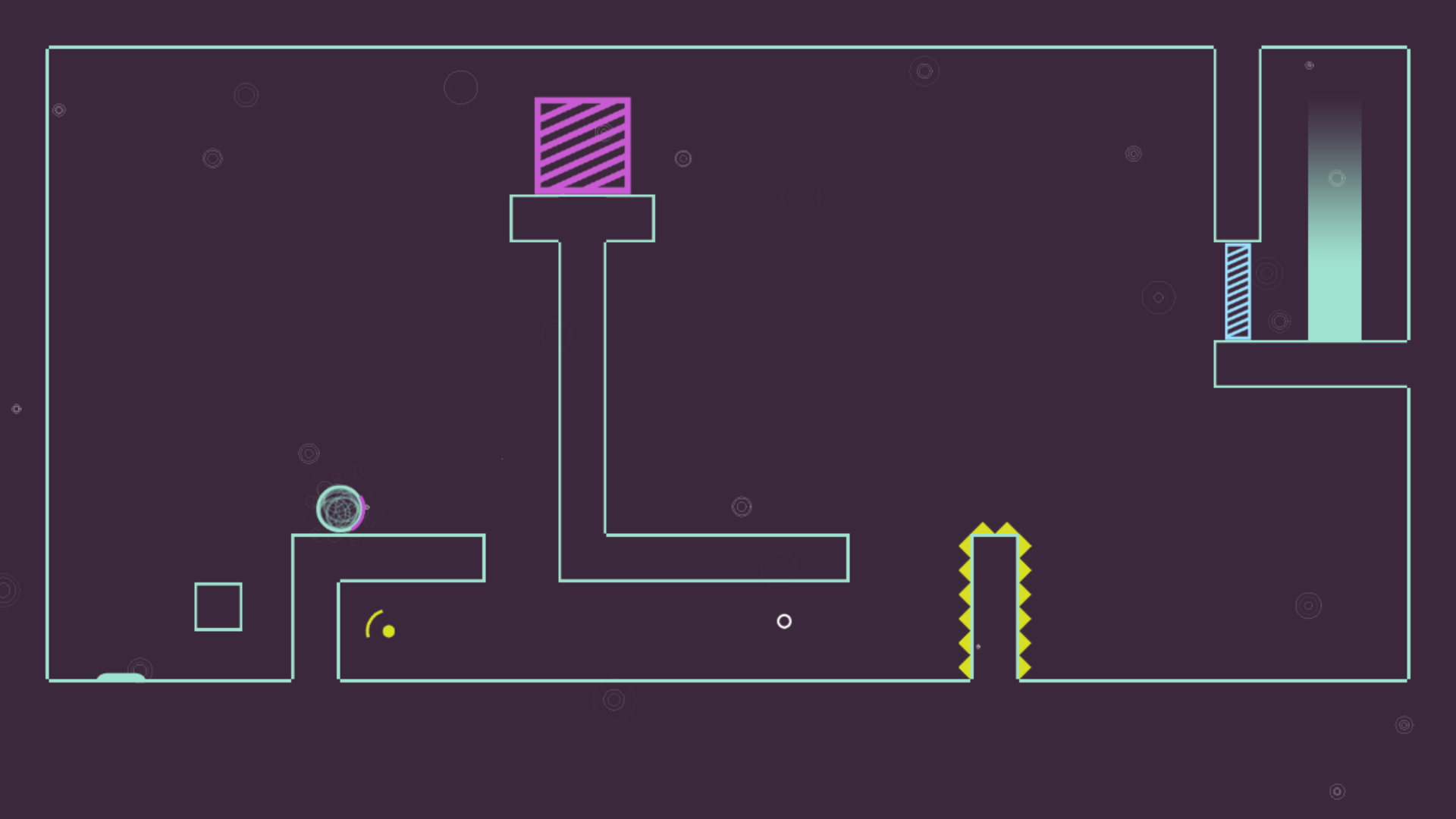 There are some design choice you made I'm not sure I understand. When I first came to the level with the 6 stacked pink crates I thought "Aha! Those crates are pink, my bullets are pink, I must have to fly up to them, then spin around mid-air, and shoot them to destroy them" but then I shot them and my shots barely moved them. That was ok, at least it moved them a bit. Then I flew into them with my character. And they moved 10x as much as when shooting them. So I said whatever and continued on. Then I came to the point with the yellow obstacles and my bullets DID destroy them. So basically I'm confused as to why my bullets are pink and there are pink obstacles, but they don't interact very much, but then there are yellow obstacles that my shots do interact with. Then also lump in the yellow spikes that aren't destroyed by bullets and the yellow enemy shots that ARE destroyed by bullets (which I too only realized by your comment to Monstr down below). I think having things that can be destroyed by your bullets all be pink (enemy shots would then probably need to be a slightly different shape to differentiate from your shots) and things that can't be destroyed by you all be yellow, it would make the game more intuitive to the player. Maybe you had your own reasons for the colours, this is just what went through my head when I was playing.

Sorry about being super wordy about my critiques, I wish I could make them more concise. All in all, I think your game was well done and felt like a pretty complete game (a lot more so than most game jam games).

What a review, it shocked me at first and now I feel obliged to write a detailed response, so let's get to it.

At first we started by creating a mechanic which is thrusting yourself using your gun, it came to our knowledge that the thrust is too weak or otherwise the gravity is too strong, which we are trying to fine tune, but the player may never know that it is a gun unless he used it, that's one of the reason we added the turret and added interaction between the player bullets and other objects in the environment, and in order to stick to the theme we didn't want to go all crazy and put too much mechanics in the game; here I'm referring to adding interaction with same color, but instead we just used the different colors to hint the player to different or new objects added to the scene.

I don't think this response is as detailed as your review but I hope it answers some of your questions, thank you for the review, thank you for helping us fine tune our game.

So very good! Everything was super satisfying. And the levels were very imaginitive and worked really well.

I got stuck on the level where there are two enemies shooting either side as soon as you spawn, I wasn't able to push the larger boxes off their buttons after I'd blocked the enemies above them at the start.

Do you have any videos showing solutions to the levels? I feel like it'd be cool to see!

Submitted
Box in a Box
LikeReply
XeriseDeveloper3 years ago

Thank you for your feedback, we'll be more than glad to record that tomorrow and post a youtube link here

ahh,  I didn't think to shoot the enemy's bullets! Thanks so much for this. :)

Wow! Super refined and visually pleasing. A very nice mechanic overall. Besides what's already been said, I think one way to extend it even more would be to play with more variety in player-enemy interaction (for example, perhaps having mobile enemies or power ups the player can get that allow them to destroy enemies, etc), just to make some of the puzzles more complex and challenging. Overall, superb!

thank you some much for your positive feedback and the cool suggestions, we are actually trying out many features and trying to keep the best ones that fits the game

This game has very pleasant visuals, nice sound design, stunning ammount of content, great job!
It's very well made, so I don't feel sorry for roasting it a little:
The falling speed is a little too low for my taste, the movement feels floaty.
The restart time is too long, especially for such a "try again type of game".
There's very little I can nitpick, some of the uses of design principles were pure genius.
Congratulations on achieving this impressive piece of software :)

Submitted
Rogue I Don't Like
LikeReply
XeriseDeveloper3 years ago

thanks a lot for your constructive critics! the falling speed and restart time has already been updated since we got few feedbacks on that, there are so much more mecanics we didn't get time to put on the demo. we hope you can see our final product someday!

I will try your work as soon as I am home

Thanks again, best of luck!

thanks for your feedback, we have updated that but unfortunately we cant touch the version posted in the jam

The game is so cool !!  I've really enjoyed playing it, especially with that dope  music in the background ! well done homies !

Loved the replace mechanic and the art style. Still it needs so more polishes in the moving mechanic.

I really have appreciated the puzzles ! somehow the long bar that disappears have annoyed me a lot but overall ! and i guess you did a 2D platformed without jumping but with propulsion if i guessed right that means you did the job

Thanks for your feedback, well basicly we made a platformer without any mouvements ( not just jumping ) , the only way to move around was by using the shooting propulsion, and as you might have guessed, it will be also a punishement to shoot at enemies without considering the side effect.

pretty good, personally I found it a bit slow, maybe  it would fit better platformer with bigger focus on puzzling.

Thanks for your feedback, it surely starts slow and it was so that players get used to the mecanics and propulsion force, since the levels after 15+ gets really hard and require a good control of the ball