An Arcade Shooter without the Shooting
Submitted by Napoleon Dynaparte (@dynaparte) — 19 hours, 25 minutes before the deadline
Add to collection 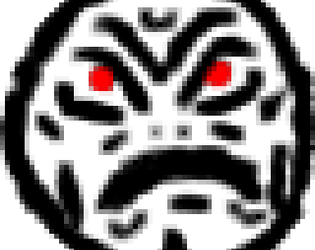 Enjoyed the gameplay and the style! I like that you went as dumb as you reasonably could with the visuals, it feels like a meme game. In my screen the contrast wasn't so good though, and as others said, a bit more feedback would be nice. I quickly learned how to headbutt stuff (which is good) but i didn't really get what each different "Asteroid" does.

It really looks like you had fun making the game lol. Fun game :)

I'm glad that you found the game enjoyable. When I first started making this game, I wanted to make a game that was sort of a magnum opus of mine. But as it turned out, when I downloaded Gimp and started making sprites in it, it became clear to me that I wasn't going to be able to make the game look nice with my skill set. So once I realized that, I decided to just screw it and make the game as dumb as I reasonably could.

Feel fun to play, the voice effects made it better hahaha! However, there needs to be better feedback from actions, for example when you take damage or when you hit an enemy to give the headbutt more oomph.

I'm glad that you liked my game and I agree that there should be some more feedback for various actions. Perhaps a combination of screen shake and momentary pausing for when you hit enemies and a screen flash for when the player gets hurt.

I liked the Idea it was simple easy to play. It functioned, that said the sling shot mechanic feels like it needed something else to play off of, maybe unbreakable objects, spiked walls, a scoreing time system? The sound effects were to much though.

Bro, that was great fun, will spend ages playing that

This was funny and I understood what I needed to do! Also I like the idea of the headbutt. The overall look made me think of frog fractions, which is always a plus in my book.

Pretty fun. My highest score was 8000 just wish there were more enemies on screen at one time.

I didn't realize their was a scoring system, is that what the green thing at the bottom was?

no thats health the score was in the top right

Asked to use my internet but doesn't run At All, i'm really hoping this isn't a virus

I doubt that you can easily include viruses in GameMaker games. Use the installer instead, that works (even under wine).

For some reason when I pressed ‘create application’ in Gamemaker Studio it made it so the game only works if you use the installer. I’m also not sure why it ask to connect to your internet. But I can certainly assure you that it’s not a virus. Just install the installer and follow the instructions from there.