An RTS game where you can't control your units.
Submitted by 42triangles — 1 hour, 32 minutes before the deadline
Add to collection 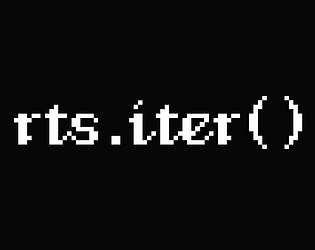 I really liked this submission. I liked the graphics and everything that went into making this game. I respect the fact that it was made from scratch also. Good job!

I liked how symbolic, yet expressive the graphics were. The terrain was simple, but also served well as a battle ground. I had some trouble understanding what the orientation of the unit rectangles meant and whether I could control it or not. Sometimes I found myself losing fights, but because it went by so quickly, I had trouble understanding what exactly went wrong. I think a feature to replay the fight a couple of times would have been very helpful. So would have been a way to replay the fight a little bit slower. All in all a nice effort and one extra Star for using Rust :>

The orientation doesn't mean anything, and is purely decorative.

And thanks for the nice review!

I had real hard time reading/seeing everything a the resolution is really small. I have 4k monitors so it was hard to see so I was not sure how I could lay out my units and so forth still I like the concept behind it. :)

You could've made the window bigger, the instructions are on the title screen.

IMPORTANT NOTE: Please rename "game.exe" to something else (like "rts-iter.exe"), if your AV software detects it as a virus. It's not, but the filename alone seems to cause trouble with i.e. Norton or Avast.

This isn't the sort of game that I play a lot, but I found it engaged me for a time and was easy to understand. The graphics are really simple but they are clear. With some more polish they could look really great. It's nice that the title and credits come up immediately, however I imagine some people could have trouble with that particular font. A really cool little game