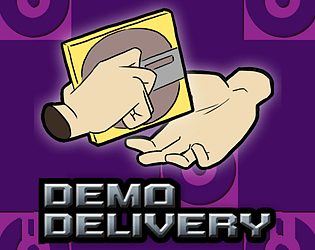 Nice game! I included it in my compilation video series of all of the Giant ROM 3 games, if you’d like to take a look. :)

@warmonger Yeah I tried to leave a response this morning and it disappeared! Apparently there's a character limit for comments that if exceeded it just throws away your message!

I totally meant to have it draw in the different color for that level, I could upload a fixed version, but I'd be too tempted to add a new feature. Last night I realized a perfect match for the ice would be mud tiles that slow you while you're on them. Would hurt your time, but would be a way to let you adjust your timing for dealing with the fireballs in the last two levels!

The explosion was a holdover from a version of game over before the timer was a mechanic, but also all the runners / interns are androids. So every time you die, a new one has caught up to the last checkpoint, and you run past the smouldering ruins of the last intern.

@bollard At one point I broke the jump counter so you had infinite jumps, and it felt almost exactly like Flappy Bird. I considered going that way for a little bit, because I do like the feeling of having a very predictable jump arc and being challenged to put it in the exact right place, but ultimately I decided I liked the idea of jumps being a kind of resource. You have to be very selective about when to jump, and you're not in the air all the time. The forced ground time is a matter of pacing, a period marked by a decisive absence of action. If I had more time for level tweaking, there would have been more space between hazard sections as a place to breath and reflect on the previous hazard.

I left a comment here last night, but it seems to have not sent(?)

Was just saying that I'm impressed at how much gameplay you managed to fit into 'Press Space.' The ice blocks were pretty inventive, and I felt clever when I realised they could be used to my advantage. (I should probably feel stupid for not realising it in the first place...)

I was confused when I failed on the ice level a few times, because the white timer is completely invisible on the white background. I did think it was a bit that failing on the fire level brought you back to the very start of the game, but I did get a case of 'I'll just try one more time...', haha.

Also, exploding was an appropriate way for the character to die, so well done!

The intro was fantastic, really liked the way it looked and sounded. I liked the feel of using the ice blocks to speed up a lot, definitely made it more challenging. However I think overall the game was a little too punishing, restarting completely is tough to cope with even in a short game! Maybe would have been better for each level to have a separate time limit, and then score the player as a sum of their time remaining on each level.

Also triple jump is a weird mechanic :P Maybe just have double jump but make it higher, or a jetpack-type mechanic with recharging fuel?

Glad to hear people are finding it satisfying! Definitely tried to put gameplay feel first, so good to see it worked.

@Aska & @MiniChimera Yeah, it was about 10 minutes after I got the build uploaded and looked at everyone else's entries that I said "oh, whops, forgot to put any GB in there." I put a blurb on the game's main page to try and justify the GB-ness, tl;dr the idea of rushing a demo to the conference is the first thing GB makes me think of re: E3, and I wouldn't think of that without them. If I had more, time, maybe would've had like fake "waiting for press confrence to start" tweets from the crew pop up while running. Oh well.

Very fun and addicting game. I liked how you added the flames to indicate where you got killed. Also I enjoyed how you naturally teach the game mechanics instead of through a text explanation.

This game is maybe a little too difficult. I was only able to complete it after a perfect run in the first three levels and dying three times on the last level.

That was really fun! I enjoyed the ice blocks, flying through the air off of those things felt really good.

Not really seeing the Giant Bomb-ness of this entry though.

Holy moly that was hard to beat, but felt good the entire time. No death felt cheap, and it was easy to see what I was supposed to do when I did screw up. The strict timer did make it kinda hard to hand off the demo in time, but man, it was more satisfying when I finally did win because of it.