GLITCHER is a Tactical Espionage game where you play as a computer virus
Submitted by MUIFWEGO (@muifwego) — 20 minutes, 32 seconds before the deadline
Add to collection 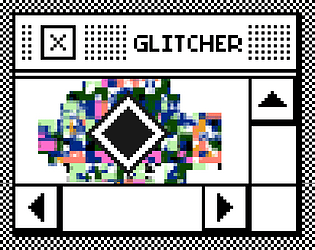 Looks really cool. Love the theme. I was having trouble without instructions, I got into the first level or two and then got stuck.

Thanks so much for checking it out! As you complete the levels the virus keeps spreading, first within the folders, then outside. After the second level the glitch starts to  spread on the desktop.

I'm nearly finished I think (into the font files now), but I've gotta run now... will come back a bit later and finish it.

Scrolling windows as a mechanic was very interesting and often adds greatly to the challenge of a level.

Edit: Finished it this morning - very well done and an amazing number of levels!

One of the game I spent the most time on ! Truly a great game !

The only downside of this game is the lag, on big levels the lag is horrible and the player keeps moving even if a key was released :/

Thank you so much for the support! I really want to optimise it, we just ran out of time. I'll update the game with a bit more additions once the voting period ends. Stay tuned!

You can start inside the roms folder that is located  inside the trash bin. If you click the glitch the level will start.

WASD movement with mouse for scrolling. Hope this helps!

I really liked this one but I also got stuck on adulthood.jpg

Loved the retro Apple aesthetics in this one, great job!

Amazing work. Truly great idea and execution. Made me very nostalgic for my old Apple Classic. Going to come back and play more very soon.

I'll try to finish the game after rating a few more.

Hi! I've played Glitcher for 15 minutes and I love it.

I've reached the ADULTHOOD.JPG level and I'm not sure whether it bugged out and didn't load properly, or if I need to do something different to load this one (the "glitchy" part that I needed to click to start the level is under the picture; I see parts of it when dragging the picture, but can't reach it). I'll probably try it again later.

As for the gameplay, I've only found two things I think could be improved:

- the hitboxes on the 1's and 0's in levels could be a little bit bigger, sometimes it looks like I'm close enough to collect them and yet I don't

- I don't really like the need to manually scroll the window if I want to see where I'm going; maybe leave it as an option (for scouting ahead), but also make the camera follow the character when you move?

I love the old-OS aesthetic, and while the gameplay itself is pretty simple, I see a lot of potential in it. I hope you'll keep improving on this idea, I'll be waiting to see what you come up with next. :)

Thanks so much! I fixed the adulthood.jpg level so you can finish the game now, I hope thats ok.