The eyes will show you the path
Submitted by Steven Miller (@stevenjmiller37) — 18 hours, 52 minutes before the deadline
Add to collection 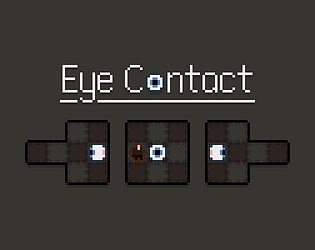 Good polish and art, good puzzles. The simple ambient music goes well with the rest of the game to set the mood.

i had no idea what to do the first time i actually had to deal with the purple and green blocks. difficulty jumped up by a lot in that regard. movement felt a little laggy at times like there was a cooldown on each movement.

Interesting, I was hoping the first three levels would establish the walls well enough, but I do suppose it would've been clearer if there was an early level that had more of them, presumably in a narrow corridor where the player could be forced to move around them.  If you have a rough description of which level the difficulty jump took place in it may be helpful.

Also, there is indeed a slight cooldown on movement unless all movement keys are released.  Said cooldown is slightly longer (still only around 1/3 of a second) following the first move after a key press.  This is to reduce the amount of missteps that occur.  The one that felt laggy is probably the one for the initial step, but without it, it is somewhat easy to accidentally move two tiles instead of one.

Very cool game! Extremely innovative, a large variety of puzzles and even new mechanics half way through the game! The ambience fits in with the tone of the game, the artwork is clear and the mechanics self explanatory.
One of the best entries by far!

On of the best entries so far! Cool puzzles, nice mechanic and the theme fits nicely. Well done dude! :)

This game is really good. Everything is just fitting. Loved it!

Holy smokes, this is a really nice game! Atmosphere, graphics and gameplay. Loved it all. Super good entry.

Submitted
Lost In The Forest
LikeReply
JK5000Submitted1 year ago(+1)

This a fun little puzzle game, whit an interesting atmosphere.

Submitted
A Blind Man´s Walk Through A Dragons Cave
LikeReply