The adventure story that told by the old bumbling fox to his grandson.
Submitted by Aleksandr Nariadchikov (@a_nariadchikov), Kae (@Silver_lense), Ballestad Studios, CupOfPride — 3 minutes, 14 seconds before the deadline
Add to collection 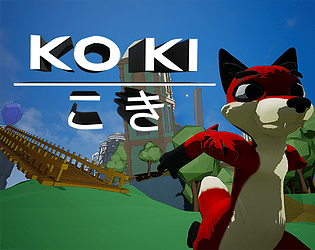 The graphics of this one are cool, you even got a cinematic intro. I like the low poly models. It is impressive for 7 days development time.

The movement feels really strange having this cool 3D enviroment and moving just forwards and backwards. I got stuck several times and overall the game has several glitches.

I'm confused with the theme here, is the fox a liar and tells a fantastic story when in reality he just took a walk into the forest? Or is the game incomplete because you had no time and he really had an adventure?

The music is nice and fits but the loop is not seamless. I found the voice acting overly cheesy and cartoonish and sometimes is barely audible because of the music volume.

Thank you for playing:)

Yeah, both of your thoughts are right, the game is incomplete in the first place and in the second, yeah, the voice overs should provide another story compared with real in-game actions.

Would check your game as well!

Here are my positive points:
-The art style is great.
-The effects, although could use some work, add flavour and dynamism to the game.
-The voiceover and the music that goes along with it are nice and work smoothly with the game.
-The changing 2D perspective is quite a nice idea!

My negative points are:
-The gameplay is a bit wonky and glitchy (movement, animations, bugs). For example I got stuck under a platform pretty quickly after the game started.
-The lighting could use some work to make the art look much better.
-The game is quite heavy in size.

Overall an interesting concept with a nice art style, but which is a bit glitchy ^^

Thank you for your feedback, we appreciate it!

Will check your game out!

I like the graphics style you have in this! The controls unfortunately felt a little awkward to use and holding shift to run didnt actually seem to make me move faster. I got stuck at the tower climbing bit because my character moved beside the black box and when i held w they ran up and then got stuck under the lip at the top. I really liked how you used voiceover in the game too though :) Nice work!

Thanks for the feedback, mate! We are going to rework that control system as well as adding all voiceovers with proper volume and etc!

It seems that you went all out on the graphics, but neglected a bit on the gameplay :/

I'll admit, the game looks awesome. You've done a great job on the graphics. Maybe some more sound effects (like jumping) and it would have been a killer!

Sadly, the controls feel weird and unfinished. I've heard that you didn't finish some of the spline paths, and it shows in some parts of it. I got stuck at the first little tower on my first run and on my second one, the character wanted to walk in a wall but not back out of it. The game also encourages you to just walk in one direction... and that's it, you win. (just read that this was intended in one of you comments to someone else. I guess it felt to me more like a bug than anything else.)

I guess you were just too ambitious with your project. That was my issue too at first with some of my games. And that's especially true when you are doing a game jam. My lesson: Sometimes, simple ideas are the best ones. They are relatively quick to make, yet they make you want to play again.

Still, congratulations on having tried, at least! Making a game like this in 7 days and submitting 3 minutes before the deadline is certainly not an easy task, even if it is incomplete!

If you've got some spare time, come check out and rate my entry! It has 7 different endings and a hilarious narrator (and a bird main character!)

Yeah... You have noticed that right. It is our first jam with that team (for me just first), so we have underestimated everything and unfortunately haven't got time to proper play testing. That is a great lesson for future jams and projects, so overall we have enjoyed the process!

Speaking about submitting 3 minutes before it is another story to tell, ahahah. We were looking at upload bar with whole team as well as at timer on jam's landing page!

Thanks for feedback and playing:) I will definitely check your game out!

Really like the art style and music. I think the buggy controls hold the game back a LOT. I got stuck on some pink tower where the fox would just run into the wall and i couldnt progress further :(

Would really recommend a standard third person controller for this and maybe a pointing arrow or orbs to collect, that point in the direction because the controls are too painful right now :/

Submitted
The Enemy is What?
LikeReply
Aleksandr NariadchikovDeveloper177 days ago

Thanks for the feedback and playing, friend!

Sorry, that you haven't managed to progress further. Hopefully, we are going to rework controls and collisions!

3rd person controller is a good suggestion, we will consider that:)

Very pretty! The controls are kinda buggy, and the voice are low sometimes, but I enjoyed!

Thanks for playing and giving feedback, mate!

LikeReply
in Principle GamesSubmitted177 days ago(+1)

So this is a hold D simulator. Then press Space when your character gets stuck in geometry. If that doesn't work, hold A. Try space again. Are all these options not working? The next course of action is pressing Esc and then clicking on the Quit button.

Music is OK, but repetitive. Voice acting is pretty weak, but I think that's part of the cheekiness.

The game didn't work for me. You were far too ambitious making a world this large. Too many things that can go wrong. And boy did they for me.

Yeah, we underestimated whole picture... But we made conclusions for future projects, so it was a good lesson!And, of course, we are going to polish everything and add all voices in a proper way:) Thank you for the feedback!

I managed to "fall" off the path and ended up just waking into the ocean unable to escape. And I guess the run function wasn't working either.  An interesting idea and application of the theme though! :)

Thanks for playing, mate!

Yeah, we were in hurry before Jam ends, so some splines for running were put not in the proper way, unfortunately :(

The main idea is that speaker is telling not the same as the actual picture. So "I was the fastest fox" corresponds with that running function, he can't run fast for long time period.

And as you see we didn't manage to upload all dialogues as well as some volume corrections, 7 days weren't enough :(

We are going to fix everything and add all content in several weeks, so you can replay it afterwords!