You must survive the onslaughts of zombies with limited ammo. Make sure not to fall for the games lies.
Submitted by IndieAustin — 20 hours, 20 minutes before the deadline
Add to collection 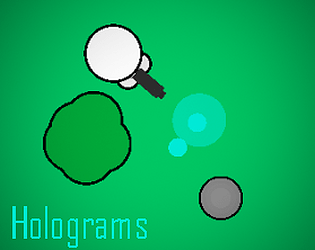 if you don’t want to play the buggy version, add to collection as I’m working on a new and bigger version.

Oh, that's a really interesting concept. It took me a while to get how to play it, but when I did it was really enjoyable. It's some kind of a strategic shooter.

If you upgraded it with some variety of obstacles/enemies/powerups it would be really nice.

I like your particles and screen shake, however I missed some HP indicator as I didn't know when I was going to die. If health regenerates then you could think of something that is used in Gears of War, so some kind of shader that makes screen fade or bloody and when it regenerates it dissappears a bit.

Music was really simple, but as game requires a lot of focus I didn't even felt that, so that was good.

It took some time to figure out what is really a lie. Interesting idea!

While it took a few rounds to figure it out this is a really well balenced game that was super fun. I also love the attack animation on the zombies, super cute!

it was hard to understand how to get more bullets, but it was really fun, good job

yes, that seems like a common problem, i probably should have worked that out better.

i dont think so, its fun when you discover how

Took me a while to understand how to play correctly, but I got the hang of it. I felt that it was quite difficult to maintain a good situation. I felt this was because the enemies I needed to touch were so close to the real enemies. So it would risk me taking damage. I also felt that there weren't much holograms compared to real enemies. I often would shoot the second I gain 1 ammo, only to keep kiting until I was in a good spot to touch a hologram without dying. Regardless, I found that you nailed the theme, and the idea is quite innovating. Nice work :)

Thanks! What i have noticed is that it gets more fun the longr you play, or at least for me. Also the holograms have a 50% chance if spawning instead of a zombie so i guess you were just unlucky. Anyway, thanks for the feedback and your game is awesome.

I might give your game another go, see if I can get further. :)

Thanks, whats your highscore?

i think i got somewhere from 25-35 last time i played. I don't remember exactly because my score doesn't display when I die.

I like the premise. But i think theres a bug in your submission. I only get one ammo, and don't see any ammo boxes respawning. I usually end up shooting (or most likely missing) a hologram, and then i'm just out of ammo.  occasionally the player shoots when out of ammo....Not exactly wwhen. Great idea though.

I hope to see you in another game jam.

This is a nice game really enjoyed. Like the concept. I managed to get 27 Score.