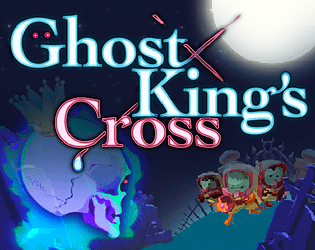 In what way does your game fit the theme?
This game is a bullet hell, partially due to the steadily increasing onslaught of grunts firing waves of bullets at you, but also because your own bullets ricochet around the arena and can deal damage to you.

Keeping bullets on the screen is a requirement for you to have the strength to take down your enemies. In order to progress, you must survive chaos of your own creation.

Did you write all the code yourself and made all the assets from scratch?
All of the code and every visual and audio asset were entirely produced by our team within the week. I'm so proud 🥺

Nice graphics and audio! I think you can add more mechanics (like powerups) to make the game more challenging. I had fun playing your game. I think it’s a great game!

10:36 with 374pts. I don't know if it is much, but what I know is, that this game really deserve a lot of players. Game is polished, art is great, music is VERY good and the mechanic "more chaos = more damage" is clever. Great job, great game.

Quite polished and plays well! Simple idea but really ups the chaos. I really like that the players are incentivized to help create the chaos that endangers them.

I think some variety can be added with powerups that add spread shots (and more chaos), and enemies that have spread shots.

Definitely a great idea, We did consider power ups but were just too pressed for time lol! Perhaps if we go back and work on it some more. We also wanted some more enemy variety and variety in general.

Beautiful art, beautiful game and fits the theme. But it lacked to explore more the mechanics in the gameplay.

With a better focus on game design, your game had a chance to be the best at Brackeys.

The sound and visuals are so crisp and clean. I really enjoyed the animations.

The start was a little slow but I guess that's good to get used to the mechanics before the chaos comes.

Congrats on completing this game.

A masterfully crafted game....Really amazing, fun and addicting kinda difficult and too chaotic but fun none the less.Do check out my chaotic scifi fps shooter game

'A bullet hell of your own making' what an awesome concept that totally fits this jam.

The art style is Suuuuper cute, and the music and sounds all fit perfectly.

Excellent level of polish on the menus and UI, gotta love seeing that especially since a lot of jammers overlook it.

If anything I think the projectiles could move a bit faster, just to speed things up and lay on the stress real thick.

A+ game gang, keep up the great work!

This game is great! A very interesting idea. The graphics and music are at an excellent level. The main menu reminded me of the game "Plants vs zombies". Good job!

This game was incredibly well polished! The Art was solid and cute. The Audio was immersive and fitting. The UI design was great as well, I might have to take some notes :)

Also - this game did bullet hell really well where it's easy to go wrong. The bullets were slow and dodgeable, allowing the player time to avoid damage. The number of bullets on screen were sparse at first to give the player time to acclimate to dodging but ramped up over time to increase the difficulty

For a 7 week project, this was overall amazing! If you guys plan to keep releasing updates, I have two recommendations:

The game could use some sort of variety to spice it up! That could come in the form of powerups, weapon upgrades, new enemy types, or even bosses. Doesn't matter exactly what it is - that's up to you guys!

The game could use some sort of progression system! Something to really incentivize players to play many many runs would really help to improve the game! This could be in the form of an end goal (beat boss 4 and you win the game) or in the form of unlocks (get this far and you can buy xyz), etc.

Nonetheless, this game was an amazing experience for me!

This game is a hidden jem in this game jam. The Art looks really good and the soundtrack is sooo nice! My Highscore is 164 pts and I survived 5:13,17
The font is a bit of a mess. I think you got 3 or 4 different font styles xD

Damn intense, I love the music with it's combination of classical and synth vibes! needed few attempts to realize that vertical shooting is making more chaos and kills things that I wouldn't think they exist, but damn I loved that CHAOS!

Wow this game is great, it is making me enter release title review mode...
PROS:
- Great art style, the title-screen looks amazing and all the UI elements feel neat and themed. The characters are also really pretty
- The sound effects are pretty good, but the soundtrack is simply amazing. It is stuck in my head right now, and I've been sitting in the main menu for a good time now to simply listen to the music
- The concept is simple but effective, you create your own bullet hell. It is well implemented and really leaves open room for your own strategy.
- It might sound weird, but I noticed the health system was really effective. It is nothing revolutionary, but seemed to work really well for me. I went from 1 heart to 5 and back many times, before finally dying. I think because you control your "challenge", the suspense is always healthy
- I think it was a really good choice to make the enemies static. This really sets the focus on dodging your own bullets and that is really strong design, especially with the slow bullet speed which is essential to this game.

CON(S): (Something really small, I am only being nitpicky because the game is so good. I simply hope to provide useful feedback)
- The pacing felt a bit slow. I only played one run, taking me about 20 minutes.  It felt like 5-7 minutes of the run were very introductory. After about 2 minutes I was hoping there would be a lot more enemies, because I was mostly waiting for something to shoot. When the enemies became more frequent the game quickly became a lot more difficult and fun.

I thank you for the great experience I had when playing your game.
Thank you, it was wonderful

What a great game. The art and aesthetic are amazing, the music is fantastic, and the gameplay is really fun too. Your game utilizes the idea of having your own bullets bounce around and become a threat to you as well just like in my game lol. The music really sells it for me, it's absolutely amazing. Great job all around

Great work ! Love the art menu ! The graphics are really cool in game ! And I like that how you have to balance chaos between shooting more to do more damage and be able to dodge all those bullets !
Well done on the theme !

Enemies are much stronger than they seem!
Your game have grate Style.
If you want to comment on our game!

I loved it! The art was beautiful and I thought the controls were great. I would have wanted it to pick up in pace more, I found myself wanting more chaos by the 2min mark, or at least faster moving down the road. I thought it was a great experience and I will likely revisit it to top my score :) great work.