BEFORE LOVE WAS BLINDView game page

A Platformer puzzle game that drives you through an adventure in the story that made Love blind
Submitted by azizga, ibrahimdammak, Choula — 12 hours, 59 minutes before the deadline
Add to collection 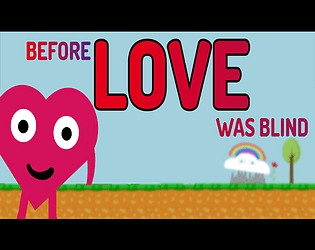 BEFORE LOVE WAS BLIND's itch.io page

Nice game, I especially like the sound effects. Simple but fitting. Just one suggestion: When hit the player is knocked into the air and has no control for quite a while. When there are clouds and spikes, I sometimes got knocked right into a cloud and couldnt do much against it.

Very cool game! I liked what you did with the change of world to reveal traps!

Some small criticism is that the colliders were a bit off, like if the clouds' colliders or that i would get hit by spikes even if they were on another platform and i was next to them on the lower platform. The audio was not the best, yet not the worst.

Overall, I think its a great game with nice game design!

thank you for testing it out .

playing testing and audio was not priority when creating this project so small problems like that can happen !

Interesting game! I enjoyed the story of how Love became Blind, but it was very long before the game even started. Maybe it would have been better to have the story be told DURING the game? Maybe breaking it up a bit would also help with the fact that the audio and text didn't match up.

Ooh, or maybe the game itself could have been the myth itself! Instead of just what happened afterwards?

Either way, I enjoyed the graphics and gameplay, though the music got a bit annoying >_<

Thank you for testing it out .

Hey i really like the game- design. The dimension shift is a good idea for the jams topic.

To be honest your audio was a bit annoying. Maybe you could use less looping riffs and reduce the high frequent sounds.

But overall a good first game!

Thank you for testing out my game !

Hey! I played your game, I'll add the gameplay link below, I hope you don't mind no commentary, because my mic broke a week ago.

Nice game! I liked the concept (reminds me a bit of Paper Mario / Fez  where players need to toggle the world in order to find hidden obstacles/items) and the cute artwork.

thank you Emmanuel for testing it out and i m glad that you like it :D

Fantastic artwork and very very nice movement control. The triple jump function makes the game even more interesting. The hidden world aspect you have implemented is absolutely nice and fits the theme of the gj.

Hello,
Thanks a lot for your comment. My team and I appreciate this a lot and we are very thankful.

fun game. Did u make the art yourself? how many ppl were participating?
Menu is cute =)

Submitted
Note to self:
LikeReply
azizgaDeveloper2 years ago(+1)

Thank you so much for testing my game . yeah we made all the art ourselves

we were 3 people : me as programmer

my 2 friends as art creator and story telling :)

We would love your feedback, too