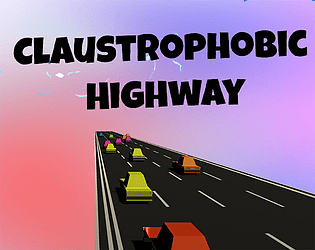 Cool game! Really like the idea and the music is too good! 5* for audio easily.

One thing I would say is that since this is a highscore based game it would add a lot if the game saved my best score and it would display it on the death screen. And that would motivate me to try to beat my best score or be competitive with others. Also when you die you should display the score more prominently. The first time I died I restarted the game and thought what a shame that the score display disappears when you die so I don't know how far I got. Turns out it was my fault that I didn't see that despite the menu and restart buttons popping in the small score couner still stays. It's just not flashy and big enough to notice.

I didn't have a problem with the mechanics as some others did. I think the honking was easy to figure out, it was an original an uniqe mechanic and I loved it. Sometimes the game got so frustrating when you were stuck behind a bunch of cars. Especially when your time is running out, you can see the checkpoint but some slow cars hold you back. But I mean frustrating in a positive way. It was great. Altough the honk recharge time could be shorter.

Overall loved it, good one!

its pretty fun, remind me of how I drove on the highway when I was younger. Anyway this was the first game I played from the jam actually and  I busted out laughing the first time another car honked at me. Good job!

Thank you so much for trying out the game. I'm happy the game made you smile haha :)

Pretty solid replayable game, just wondering, are all those trees individual objects? Cause it felt pretty laggy, maybe it was just me. Nice job with the graphics, a suggestion, maybe an animation of the car.

Thank you for trying out the game.  So like 30min before the end of the jam I implemented the trees to enhance the graphics of the game. They're spawned as you drive and deleted when far away so basically saves some performance. Though it could have been improved a lot more but that's unfortunately all we could do in the time limit.

- The music and audio.

- The type of this game ( endless-runner-ish  )

- The menu and that here is a tutorial.

What I think can improve:

-  The game does not really fit the theme ( in my opinion )

- Add a high score system. Since you are using Unity, just take a look at PlayerPrefs.

- The mechanic of clicking Space when you are near other cars is poorly explained. Try making it more clear.

Thank you for the critical feedback. I do agree the space mechanic couldve been explained a bit more and Ive never made Highscore systems before but yeah that wouldve been a nice addition. Thanks again for trying out the game :)

No problem. Making a high score system ( with PlayerPrefs ) is realllly easy.  Tutorial if you need here.

Fun game to play well done!
Can you give my game some feedback aswell, appreciate it?

Thanks and will do

thank you so much for the in-depth review and feedback for the game. It helps alot :)

Fun game, kind of addicting. Honk mechanic is kind of confusing, especially how long it takes to recharge. I love that cars honk sometimes when you cut them off though and I think I heard music from a car at one point, good audio design.

Awesome game, simple poly textures and replayability is on point. One thing I didn't understand was pressing space. It would honk when I was tailgating, but the cars would not move out of the way. Other than that, great job!

Submitted
Beat it Delete it
LikeReply
MicnasrDeveloper141 days ago(+2)

Hey thanks for trying out the game :). When honking the cars are supposed to drive fast and collider with the cars above. When I implemented it I knew there was gonna be some confusion since imo it's a bit weird how it works but yeah sorry about that

no worries, thanks for explaining it to me.

I like simple idea, but I think it's one of those that need some explansions to be fun. Game feels boring because I don't see consequences of my decisions. Deaths seem random/unlucky. Some variation would be needed. Also I think the graphics could be improved upon. Trees cast very strange shadows. It certainly fits the theme in a very original way. 5 stars for that. Also I think that game deserves  credit for great sfx and music. I like the beepiness of music, it fits the game. I'd like to see how you expand on game. :). I encourage playing my game aswell. Feedback very appreciated even if critical

Thank you for the critical feedback and will defo check out your game!

awesome game simple but kinda like crossy road i love it and i feel like this would go on as mobile game but for a 2 day project its pretty goddamn neat. 10/10

You're absolutely right! I might continue working on it later on and make it a mobile game :)

super fun and really cute has a great design!! 10/10 would recommend :)

I like it but what does the spacebar do?

Hey thanks for trying the game, in the tutorial it explains if you're behind another car and you press space to honk, they'll speed up and you can get out of crowded situations.

Hey guys, once you play the game (either if you like it or not) feedback is greatly appreciated so we can do better next time :)