hey great score! I really appreciate the comment. I believe the breaktime is the base value for how long until your tank malfunctions, with some modifiers applied to it.

the stats are just a little fun thing for me and only partially tied to game mechanics. If I remember the second one is how slow your oxygen depletes and how much you're slowed by picking up gold. The third stat might be the tank quality, so high value means it takes longer for the tank to break.

and the snow map is the same, just the sprites are switched out.

awesome, thanks for making a video! you're definitely right about the slow movement. there were ideas for more gameplay mechanics, but we ran out of time, maybe for a post-jam version though!

Quite the departure from the book! Great presentation and style; it really stands out to me as having really cohesive art, sound, and gameplay.

Just a thought but I didn't feel too invested in racking up points once I got the hang of the mechanics. Maybe some sort of win condition or timer or diffuculty ramp would help with player investment?

Fantastic style and art. Gameplay is fun and frantic, although I wish knew how much more food and fuel I needed.

This is a really cool idea and execution, I can totally see some neat collabs being made with this. 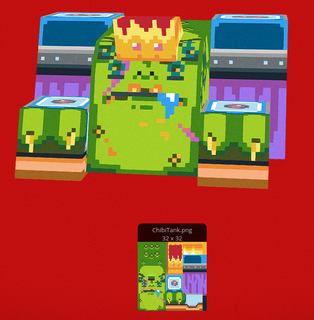 Awesome! I was hooked from start to finish. Great progression of mechanics and difficulty. Some of the overlapping teleport lines were a bit confusing, but that's being nitpicky.

Great animations, I love rotoscoping in games! Your process gifs are really cool too. The colour use and music sets a nice mood. I think rotoscoped walk and run cycles would be a good addition.

It fullscreens the tic-80 for me if it has mouse focus, works in Chrome and Firefox at least.

Very slick all-in-one type tool, I'll keep this in mind for my next solo gamejam.

Cool mechanics and aesthetic! I think I would prefer the double jump bound to a different key, but otherwise great controls

I accidentally looked at the whole map in your screenshots before I played, so I kinda cheated. I thought the player's treading water animation was great! Would've loved to see a couple more animations. And the end splash screen was great too like Diver said.

@DiVeR thanks, I used Aseprite and Arne's 16 colour palette for the art

Man I really suck at this game! Fun though. The bubbles for the reset transition is a really nice touch.

I really love the colour palette and your take on the theme. Gameplay has a good level of challenge, reminds me of A Good Snowman. Really impressive stuff for 7 hours.

Thanks! It would be a bit of a pain because I didn't have a lot of foresight when writing the network code and I'd rather not pay hosting costs for the servers right now.

wow, thanks Leaf! and thanks for lua-enet and your heroku lua buildpack which I used in this

Hey, I've released the 'finished' version of my game splahlunking. Originally made for divejam with the theme one breath I've spent a couple extra weeks adding a few things and fixing some bugs.

It's a simple low-res game about collecting as much treasure as you can and making it back to the surface before you run out of air. Your vision is limited and the underwater caverns can be confusing so either remember your route down or risk trying a different route back to snag some extra treasure.

The cave layout is randomly generated each round along with all the treasures and powerups within. Choose from 6 playable characters with different stats and 3 different tilesets.  Compete vs. up to 3 of your friends or play solo and submit your score to the leaderboards. I think this could be a fun way to kill a few minutes with teammates, like waiting in a queue in DOTA or LoL for example.

This is my first game released post-jam and my first online multiplayer game so feedback (especially for multiplayer) is appreciated! There's some additional info in the github repo for anyone curious.