I think I might just give it a try. I've been anxious to start using Godot, so I've been looking for a jam as an excuse to throw SOMETHING together, since I have this deep-seated fear that I'll program my passion project wrong and have to recreate it from scratch again.

That said, the rules/theming is a little vague. Do entries need to be based on an 80's/90's syndicated toon, or does it just need to fit the "vibe?"

Reply
Donkey Kong Country 4 - The DK Bay community · Replied to pebbz in Where Was This Game Before? I Swear It Looks Familiar.
WhiskerMidi334 days ago

Hold up, who were you on yoyogames? I remember seeing this game and checking out your others, and liking them a whole lot.

Excited to see it.

Gonna level with ya, I don't know what I just played but I liked the aesthetic. Seems like a really early demo, it was just the entrance and a big hell room sprawling with enemies. Lemme know if I missed something.

This game is wholesome as heck.

This is a lot of fun! My only gripe is that I wish I could zoom out further... Either way, this is gonna help a lot.

The X's and O's in the doors are there to mark whether or not they can be entered, since I'm only using one-way doors for the sake of not having to worry too much about story flags. You're not the only one confused by them, though! There's gotta be a much better way to do that on my part, lol. Also, I just noticed I forgot to mark which key enters doors in the description.

Thanks for the playthrough! I don't have very much raw footage of this game, so it helps a lot.

Thank you! A new demo is coming out... soon enough, as well. It's a lot more up-to-date and has its own self-contained side-story. Hopefully I have it out by the end of the month.

Thanks! I've been trying my best to pump this out. It might take a while, but It's getting there. 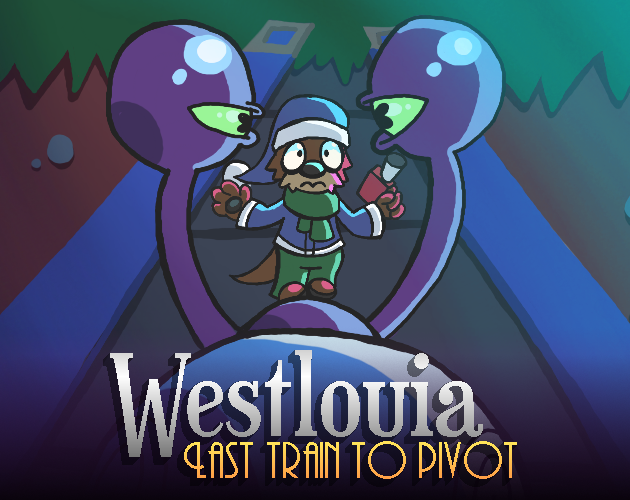 It has little to do with the game itself, but the old cover just wasn't doing it for me. The "poorly drawn main character superimposed onto some background art from the game" look, in my opinion, is overplayed, so I made a new one with a bit more originality to it. This one has a strong image of "crap, that otter boy's being menaced by a giant snail. Adventure ensues!" 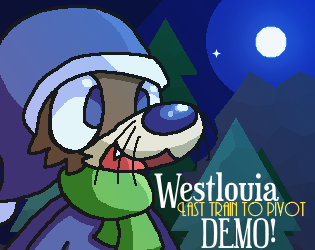 The only thing the old one tells me is "this game has a weasel-faced monstrosity who, at one point, stands in front of a forest."
Boring. 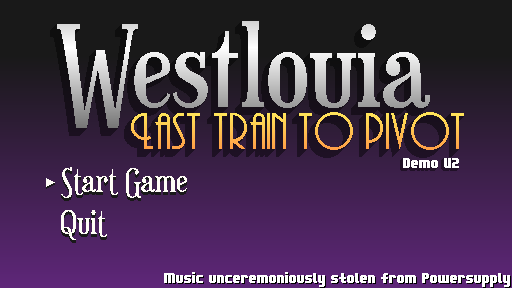 The title screen is largely unchanged, except for the different logo. I wanted to do something special with it, but I couldn't think of anything in time. Oh well. Purple gradients are okay... right? 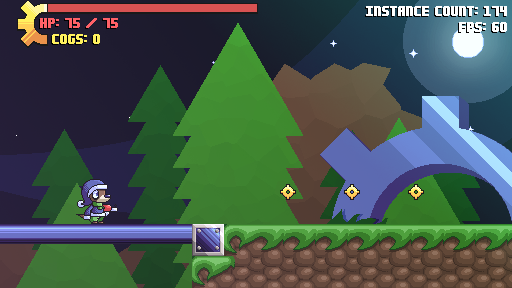 The HUD, however, has had a big revision. Instead of a standard green health bar next to an off-model drawing of Garret, I have a gear symbol. It meshes well with the cogs you collect, I think. HP is also represented with text under the bar, just so you know exactly how you're doing.  Also, the Instance Count/FPS counters have been moved to the top-right corner of the screen. This is so they don't cover up another HUD element.

Speaking of the Instance Count, it most likely won't be in the full game. It's something I use to keep track of how many objects are on the screen. I use it to make sure nothing's making infinite clones of itself in an attempt to take over the world or something.

Don't get used to this HUD, by the way. They tend to not stick around. 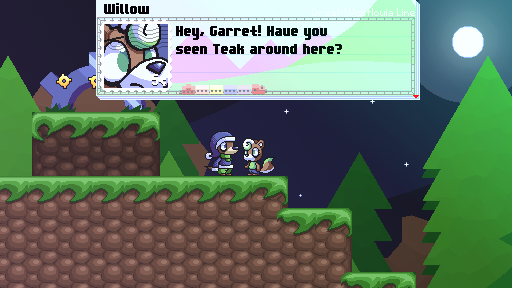 I guess "cutscenes" is kind-of a stretch. They're more like "brief confrontations that just so happen to have textboxes." They add a bit of character to the game, so they're welcome in my eyes. Now you actually have a goal to accomplish beyond just "go right."

The textboxes are themed after some tacky stationery. The theme of the stationery is "The Great Westlouia Line," a railroad that runs all the way across the country of Westlouia. It's the only sensible way to make it to Garret's hometown of Pivot. 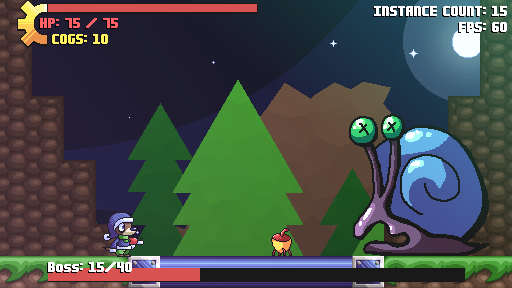 In all honesty, the boss fight from the last demo was a DISASTER. If you want a master-class in how NOT to make a boss fight, look no further than the last boss fight. It introduces new mechanics out of nowhere, it's a pain to even hit, it's confusing, it has too much health...

This new one makes a lot more sense, at the cost of being somewhat easy. Every attack it does is shared by an enemy you meet earlier in the level, so you already have some idea how to fight it going in.

I also stuck a scene before and after the fight, just to give it come context.  Overall I think it's much more enjoyable.

And That's It for Now!

If you have any complaints, comments, whatever, feel free to tell me about them! There's lots of ways to contact me and keep track of the development of the game listed on the game's page, there. Thanks for reading this lengthy devlog!

Here, I show off more of the dialog system, and how voice acting works.

I figured I'd try opening up a public Discord group for anyone who may want to discuss or follow the game. Don't worry. We don't bite. Mostly, anyway. Try to keep it civil.

Same, on the bank balance thing.

Captain Disillusion is also the name of a really entertaining YouTuber who debunks urban legends.

It's a problem people are gonna have to get used to.

Unrelated note: I keep reading your username as "CaptainDisillusion."

Haha this game is dumb. You are a silly man.

Reply
itch.io Community » General » General Discussion · Replied to Lantana Games in Does It Bug Anyone Else When People Make Multiple Pages For One Game?
WhiskerMidi4 years ago

Ah yeah. Branches would be a pretty hella addition. It'd sure keep things a bit cleaner. 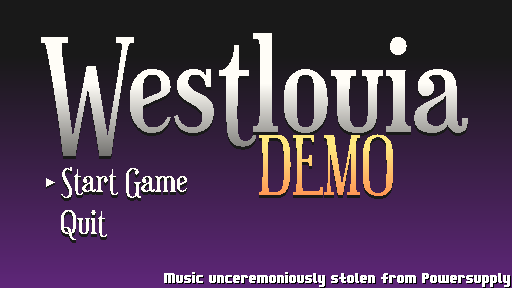 Yep! There's a subtitle now. I figured "Last Train To Pivot" gave folks a bit more to latch onto with the title. I mean, what the hell's a "Westlouia?" Now, everyone knows what a Train is. I'll just have to assume they figure out that Pivot is a location.

Now that the demo's out featuring the tutorial level, I'm working on some more levels to explore. My main focus right now is a level called the Arctic Fjord. 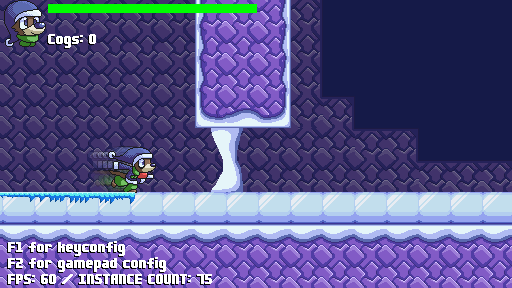 The Arctic Fjord's design is all about skating on the ice. Unlike normal ground, you don't stop dashing when you're on ice. Don't worry, though, Garret can walk on the ice without any problems, unlike some other characters. 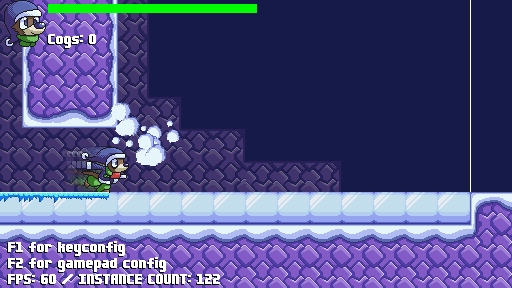 And don't worry about that snow barrier there. Garret's got enough speed to smash right through it!

A few things were tweaked this time around. They're all quality-of-life and stability features. 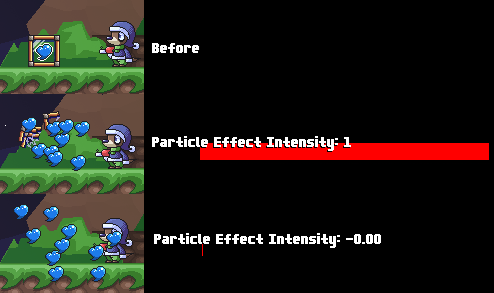 A slider has been added to the Settings menu on the Pause screen that lets you adjust the amount of "particle" objects on the screen at once. This can be used to make the game less laggy on low-end computers. Heck, sometimes it even would lag on mine. If you look closely at the official screenshots, one is taken during a minor lag spike. 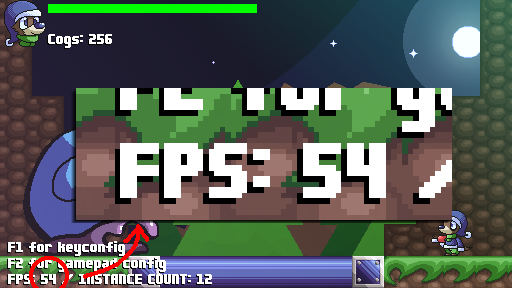 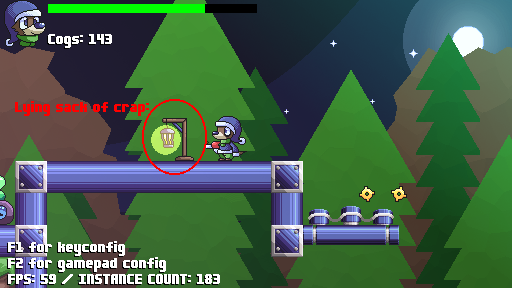 This checkpoint didn't work. At all. If you died after touching it, it would send you to the start of the level. The reason for this was because there was a door object that was overriding it. Whoops. Again.

This may seem like a lot of updates for one demo, but I have a nasty habit of letting bugs and issues stack up in earlier builds and haunt me until completion, leading to massive periods of fixing things. I'm trying to stay on top, right now.

For some reason, it never occurred to me to release a trailer for the demo. That is, until now.

Thanks! I'm still getting used to this site.

Reply
Donkey Kong Country 4 - The DK Bay community · Posted in Where Was This Game Before? I Swear It Looks Familiar.
WhiskerMidi4 years ago

Reply
itch.io Community » General » General Discussion · Replied to No Time To Play in Does It Bug Anyone Else When People Make Multiple Pages For One Game?
WhiskerMidi4 years ago

That makes sense, actually. When it comes to paid content, the more clarity the better.

My friend's game probably made sense to be split up, since the Android Version and the Windows version were two totally different experiences.

Reply
Donkey Kong Country 4 - The DK Bay community · Created a new topic Where Was This Game Before? I Swear It Looks Familiar.
WhiskerMidi4 years ago

I can totally recall playing a game like this. I'm gonna give it another shot to see if it's indeed the game I remember.

Oooh, like a modern say-and-spell? I might just have to try it out to brush up my linguistic skills, hehe.

I tried to create my own cryptocurrency.

Turns out writing "Zachybucks" on strips of printer paper isn't how you create cryptocurrency.

Oh gee, I was hoping you were talking about the streaming site. For a second I was thinking "sounds like you should call the doctor."

Say, does this apply to all paid content or just to asset packs?

Not to be that guy, but posts like this go either in the Devlog or the Release Announcements board.