itch.io Community » General » General Discussion · Replied to LDPFDEV in How old were you when you published your first game?
technicat1 day ago

My practice is to credit where I got the game assets in my game description (and in-game, if I have in-game credits), which I think is a nice thing to do anyway, but in this type of situation this informs the customers where you got the assets from and and that you're using them legitimately (and if another game also licensed them, now they know). There may still be people who cry foul without bothering to read the game description, but what can you do.

Reply
itch.io Community » itch.io » Questions & Support · Replied to Arekku in How can I contact a dev?
technicat6 days ago

That's why I stopped publishing on Google Play, they require developers list a contact email on the game page and ten spam years later, after getting suckered into wasting on some crappy publishers and mobile ad networks, I had enough.

He even deleted the thread in which he said "What posts?" which is kind of hilarious.

It seems to me in general that browser games get fewer plays/downloads than download-only games.

Reply
itch.io Community » General » General Discussion · Replied to Krunchy Fried Games in How to pronounce words that start and begin with the same letter or with letters that might sound the same?
technicat10 days ago

Yup, despite not having a linguistics background or fluency in more than one (human) language, I find this stuff pretty interesting. Text-to-speech like just using Siri can expose some of these issues (I like to set Siri to non-American English voices to hear how different it sounds).

My dim sum app uses text-to-speech (and speech to text) for Chinese, and when it's fed one word at a time, the compound words sometimes sound unnatural (and in Chinese sometimes a word's tone might change if it's combined with another word, I think for a similar reason, so it's easier to say the combined words).

Out of curiosity, I just tried google translate, and it pronounces hot dog pretty naturally, but for a contrast, the Japanese loanword throws in an intervening vowel.

Reply
itch.io Community » itch.io » Questions & Support · Posted in a way to delete a collection or remove a game?
technicat11 days ago

Go to My Library in your top right menu (this is in a web browser), then scroll down and you should see all your collections with options to delete and make private or public. 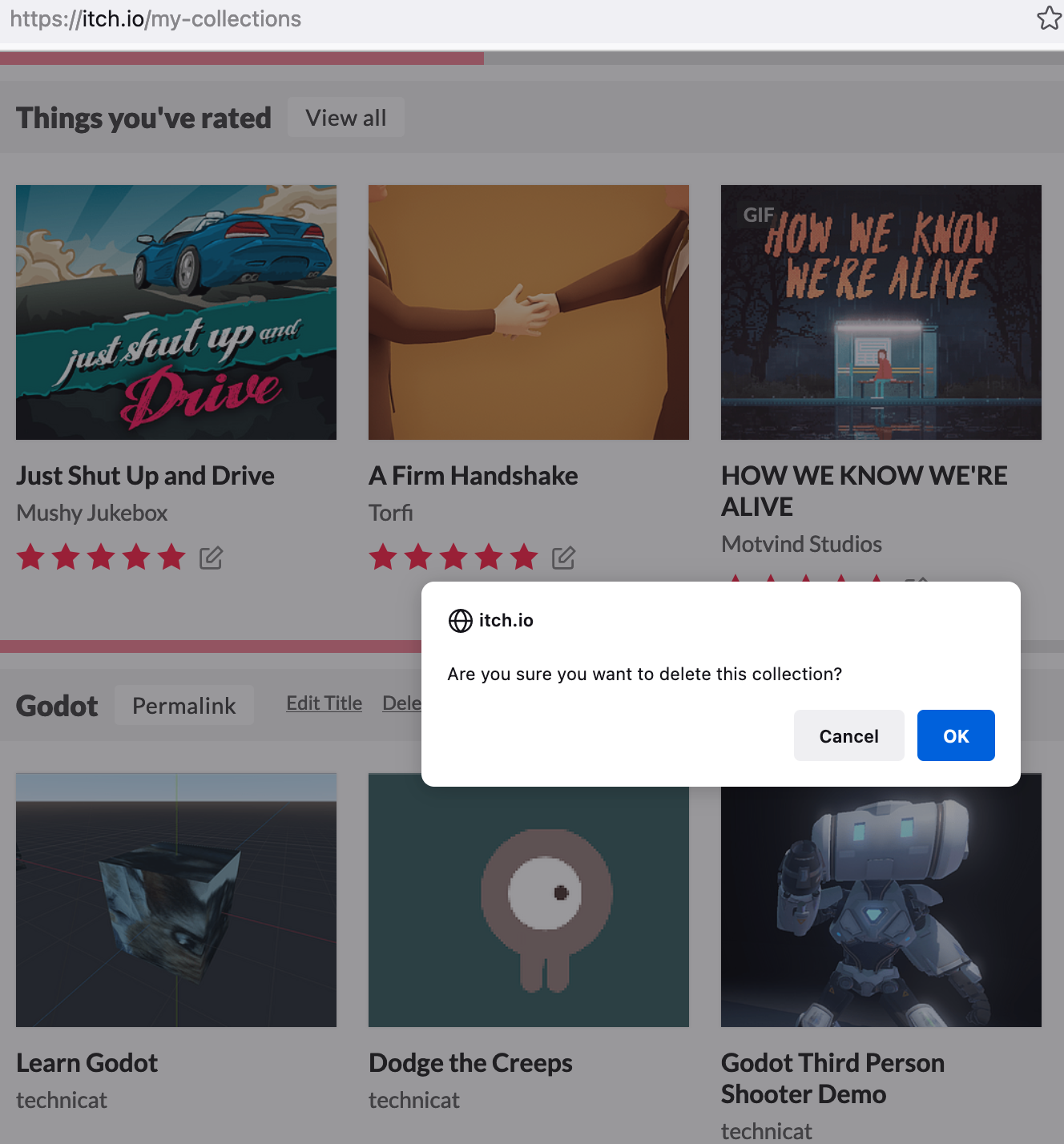 Reply
itch.io Community » General » General Discussion · Posted in How to pronounce words that start and begin with the same letter or with letters that might sound the same?
technicat11 days ago

But according to this, it can vary.

Reply
itch.io Community » General » General Discussion · Posted in Why do people like to buy cosmetic items for their game avatar?
technicat17 days ago

Especially in social games like virtual worlds (now called metaverses, again), where the main activity is to walk (or fly) around and chat and show yourself. I worked on a virtual world called Blue Mars (build on CryEngine) over ten years ago that supported in-game developers, some of who created minigames but most of them made avatar accessories you could buy in-game. Blue Mars shut down long ago and all the developer doc I wrote on the wiki is gone but somehow there's still a page about avatar customization.

I've never participated in something like that, but it looks to me like the raised amount is tracked and displayed automatically, no need to put in your own numbers. Or if you mean start off with a non-zero number, you could go ahead and just make an initial purchase, otherwise would seem kind of dodgy. 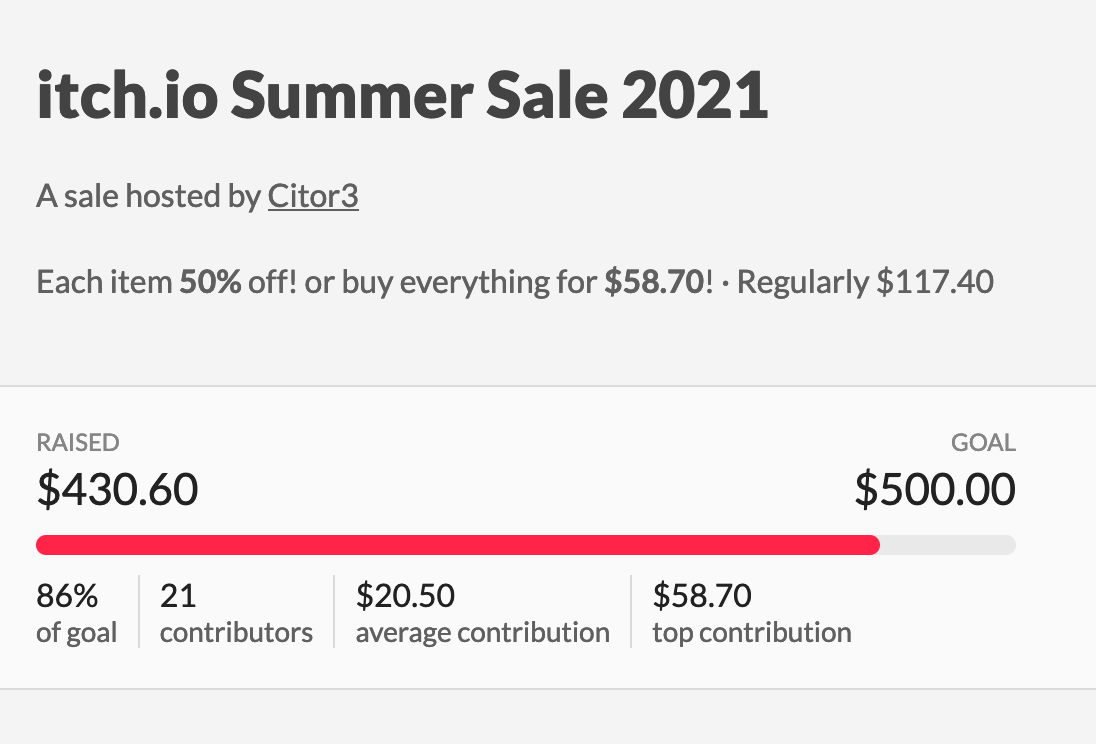 Reply
HyperBowl community · Created a new topic One of the best bowling games on Steam!
technicat17 days ago

I've often thought that plumbing must be similar to software troubleshooting.

Reply
itch.io Community » itch.io » Questions & Support · Posted in Would i be allowed publish a free game with copyrighted characters?
technicat19 days ago

A lot of people seem to get away with it, but if your question is if it's legal to use copyrighted characters in your game without permission, I believe the answer is no.

In your profile theme editor, you can switch your collections layout from list to grid. Is that what you're referring to? 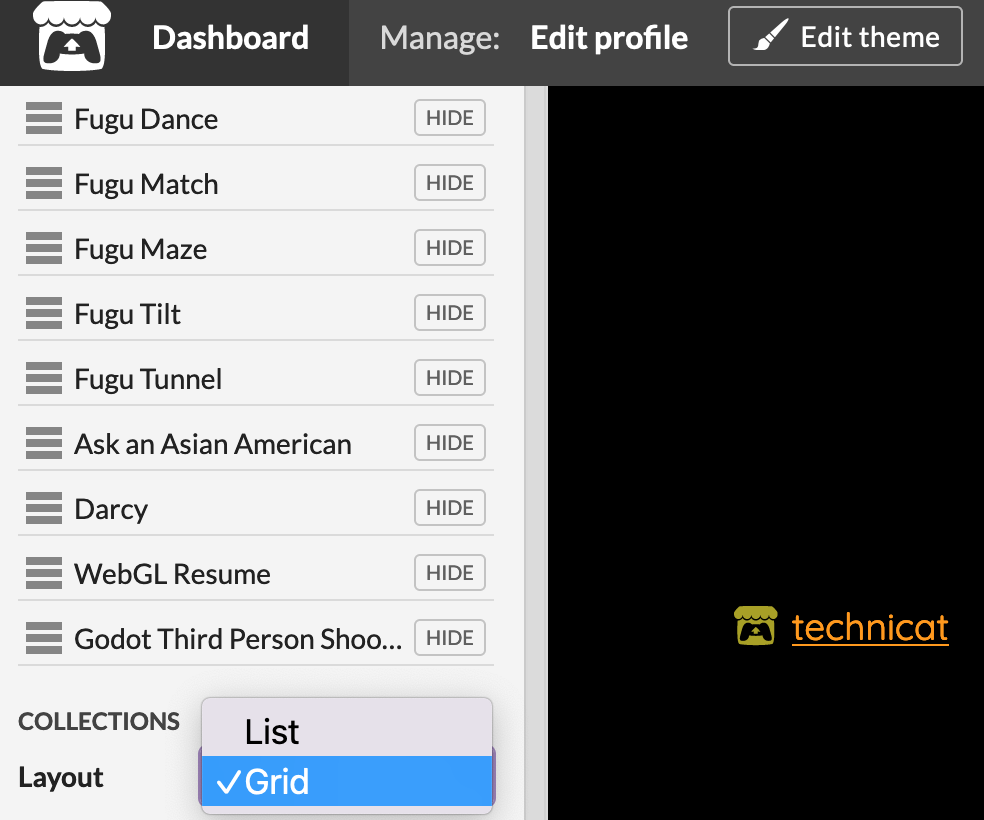 If you submitted a rating+review on the game page, I expect they'll see the review. It's a weird itch.io feature that the reviews are not displayed on the page but are really just developer feedback (although I don't remember if I've received those by email, but they do appear on my game analytics page.

Reply
itch.io Community » General » General Discussion · Posted in I have a very important question for my future project
technicat23 days ago

If you're new to game development, then I recommend not worrying about VR too much and just focus on getting into the swing of things by getting it running on a single traditional desktop platform. On the other hand, it's good if you can keep in mind future platforms and features while you're developing, and I like to do a bunch of survey and reference reading before I get started on a new project, so I recommend doing as much as you can of that without getting overwhelmed.

Reply
itch.io Community » General » General Discussion · Replied to LDGamingExpress in How old were you when you published your first game?
technicat24 days ago

In high school, someone gave me a floppy disk (5 1/4 inch, the truly floppy floppies) full of pirated games, and I found my game on it. So I guess I was published back then!

The first game I worked on that there is any evidence of is the original attraction version of HyperBowl (I worked on it for six months, a year or so after it debuted in the Sony Metreon)

and I have a licensed Unity reimplentation here on itch.io

You probably have a better handle on IP and contract issues than most gamedevs. That's a real asset! 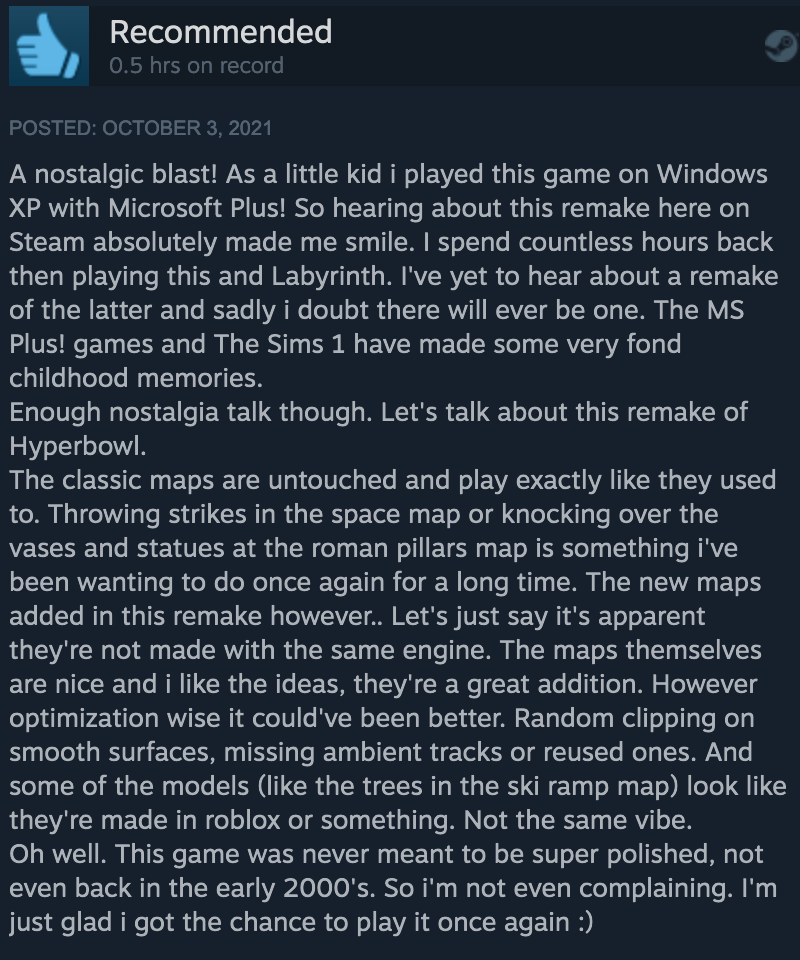 It's always nice to get paid for whatever you're doing, but on the other hand, as a long-time professional software developer before I got my first game studio job, the game industry in general is a poorer industry to work in (lower pay, lower professionalism, more crunch time) and when I spend more than 40 hrs/wk programming for someone else, I don't have motivation to work on my own projects at home.

So my favorite balance is to have part-time or intermittent contract employment to pay the bills (and hopefully learn things that I wouldn't learn on my own), and spend the rest of the time on my own projects.

Typically I just have an idea I want to try out, often from a software engineering angle, e.g. I once read the wikipedia article on maze generation algorithms, and I saw one I thought I could implement fairly easily in Unity, programmatically instantiating planes for the walls/ceiling/floor of each maze segment (the trick is to use the same material instance for each plane to get efficient rendering), and then I added a first person controller to navigate it, and then I thought it would be cool keep it dark and add suspense effets and a flashlight (I was playing Resident Evil at the time).

That was basically a one week project (with a lot of updates later) but as another example that ended up taking a lot more work, when the App Store opened up (way back around 2009) and Unity announced support for iOS, I thought the aspect ratio of iPhones was a match for the HyperBowl attraction game I worked on years earlier (2001) which displayed on a tall projection screen, and swiping on the screen could be a good substitute for the original bowling ball/trackball control, so I made a no-frills bowling game to test that control  concept (a weekend project) and asked for a license to port HyperBowl, and  then it took me a couple of years to get the original set of bowling lanes running.

Reply
itch.io Community » General » General Discussion · Posted in How old were you when you published your first game?
technicat33 days ago

I made my first game, an implementation of Othello, when I was in high school, in BASIC on an Apple II+ (and then a 6502 assembly version that played really fast and incorrectly, and then a parallel processing version in college for my thesis), but I didn't work for a game studio until I was 35, started self-publishing on app stores in my 40s, and finally on Steam (and itch.io of course) in my 50s.

This is something block should do, but I don't know if it does. On twitter, block prevents someone from following you. https://help.twitter.com/en/using-twitter/blocking-and-unblocking-accounts

That's a good idea. This is how it looks on Steam. 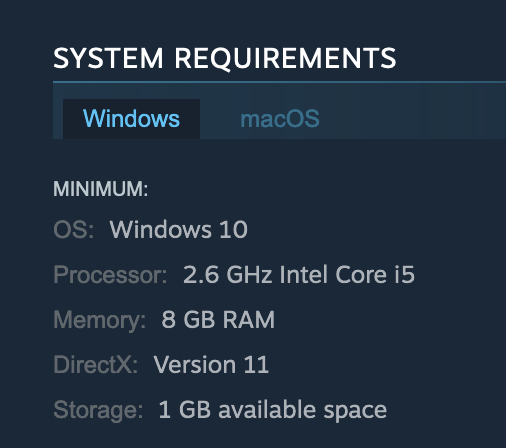 I use sticky topics in the Community section, which will always show up at the top of Community (but below Devlogs), although I suspect a more general problem is most people won't go further than the Donwload button at the top of the page.

In your edit game settings, go to the Interact tab and you can toggle the ratings on/off. 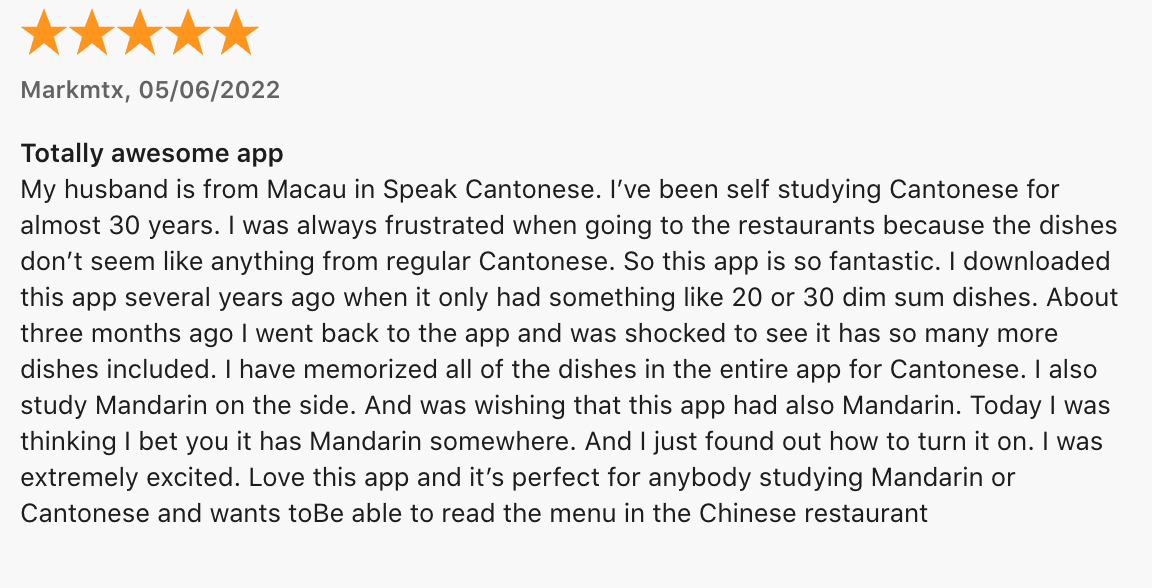 shorter explanation: URLs have limitations on the characters allowed in them, the workaround is to URLencode, them, e.g., replace those characters with their corresponding hexadecimal (base 16, digits go from 0-9, A-F) values, prefixed with %.

I had to deal with this recently, had a whole bunch of URLs in some JSON files that included Chinese characters, and they work fine if I manually enter/paste them in a browser because the browsers automatically URLencode them, but when used in code they failed, so I have to URLencode all of them. I use a Visual Studio Code plugin to make those corrections, but there are  also websites like this

Reply
itch.io Community » itch.io » Questions & Support · Posted in Does the developer see which user paid for his game and the specific amount?
technicat67 days ago

On the Creator Dashboard there is a Payments tab under which we can see the list of individual payments and email if we need to contact the buyer if there are purchasing issues, but there's a directive not to share it or use it for marketing, so that's why you might not get a thank you email or announcement crediting you.

But I'm sure it's appreciated, e.g. I recently received an email notification from itch.io that someone paid $20 for one of my pay-what-you-want games, and I immediately checked my dashboard to admire that generous donation, which by the way also pushed my earnings over the $20 minimum to get a payout.

I suggest also leaving a nice review in their discussion board and maybe mention you paid more than the minimum to support the developer - that'd be a nice reminder to everyone else that they can do the same.

You should be able to specify the directory containing the build if you use butler, but I don't remember if I've ever tried it with a Unity windows build.

Btw, if you're on a mac you can also use brew to install unity by typing "brew install unity" (and also godot)

I just checked the unreal site, and it's straightforward - click on the big Download button presented in the center of the page, takes you here

and the page states What does it cost? It's free to use. And mentions the 5% royalty if you make a lot of money somehow,  scroll down and there are instructions to download the epic games launcher which is where you install the unreal engine (and also where you get epic games).

But if what you want is free, I suggest you try godot, which is open source and thus really free.