I learned something new today.  The day is won!

The falling part was just too difficult.  Part of the problem was that I died without colliding with anything.  That, combined with the speed of falling, and narrow passageways needed to navigate, prevented me from progressing, even after being implored by a comment below.

Thanks Oliver for the feedback.

Thanks.  It used to speed up faster.  Hopefully I found a nice balance.  Hmm... a medium-sized red ball, maybe?

Thanks for the feedback.  The first surprise was the big ball, and then the walls eventually disappearing on you - so, two surprises!

This was my experience.  With my mouse sensitivity set at a default of 50%, I immediately dropped it to 0 sensitivity.  I may have dropped it further if I could.  It was extraordinarily difficult just to open one and close one drawer - it required hairpin precision.  Since that was annoying, I ignored all the other drawers in the bedroom, and proceeded to the room with the christmas tree, at which point I knocked it over.  Then, I remembered I could drag and drop gifts, so I clicked on some of them.  Didn't really know what I was doing.  So, I went for another door - in the process, I apparently clicked a couch cushion, even though I didn't really feel like I clicked anything.  In short, the difficulty of simple actions (such as opening drawers) prevented me from investigating anything, at which point, maybe I'd figure out what I was supposed to be doing, but I gleaned in the comments below that there's no point in this game - "The game was just about messing around."

Cute.  You created a consistent and cohesive mood and feel here.

It's definitely a challenge to beat that monster.  Gotta be sneaky...

Thanks for the feedback.  As others have mentioned, the game can be difficult at times, but I hope I was generous enough in giving extra balls, to offset that difficulty.  As for losing a bunch of times, there were times in testing where I lost very early.  It's really all about getting to those extra balls, and having that safety net.

Ha ha, yeah.  It gets wild!  As for the walls, I figured one surprise is nice, but how about more than one surprise?!?!  :P

Ah yeah, I figured it out.  The outline around the buttons is so thin, I didn't even notice it.  It required an extra click to highlight it before proceeding.

This is visually impressive.  Unfortunately, the gameplay doesn't match the visual appeal.  If I try to be strategic and dodge obstacles, it's easy to get the vehicle stuck, or some such.  So, I found the best strategy was to try to drive down the center of the road, regardless of what I hit.  Are there supposed to be more levels - the game page mentions multiple levels, but I only found the one.

I got a Happy End, though I wonder what would've happened if I arrived with no gift...

Thanks.  Is it fun to have the walls disappear on you too? :P

Very Solid game.  Well used surprise.  And, I'm surprised to find out those top two slots were not the developers - I figured that was the case.  I never got past the first level, though I am currently 7th in the rankings (don't know how many people actually played so far, though.)  One minor scoreboard glitch, which is shown in this pic - there's a discrepancy of 600 points between my score listed at the top and in the rankings, fwiw: 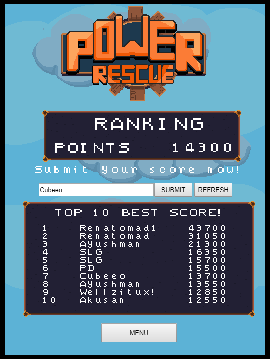 I got a kick  out of this.  It became a little trippy.  And, because someone commented to the contrary, I'm going to say that I had zero problem with the color scheme.   Also, great title.  Oh, and the 3D was a surprise! when it changed perspective.

Thanks.  A lot of tweaking went into the sounds.

First impression - cute character.  Then, I saw what the character could do - ha ha.  Nice use of the theme.  It's a simple concept, but works surprisingly well.   The audio is very appropriate and works well to compliment the mood and feel of the game.

Thanks.  For 95% of development, it "ramped up" twice as fast, but it got be overwhelming.  It wasn't until the very end of development that I scaled back the ramp-up.  Actually, I ended up having to scale back a number of things in this - ramp-up speed, audio (including adding the mute button), the background animations.  It was seriously overwhelming at one point.  It's kind of surprising how many minor tweaks this project required.

It should save your highscore for you, hopefully.  Thanks for the report.

Even after having read this, I have no clue how to rate the first game I played in the accessibility category.

This is the first game I checked out in the jam, because of the cover pic.  3D always impresses me, because I don't know how to do that yet.  From the very beginning, there's a pleasant, consistent atmosphere.  The game looks great and the music is appropriate.  While there is feedback when you get hit by a snowball (the stars above your head), there's no similar feedback when the AI gets hit, they just leave.  So, that might be one thing to think about adding - stars above AI head too.

I played this one player.  The benefit of having a 2nd player standing there with me was they could be a decoy, which seriously helped me.  That being said, playing one player, this game is tough beyond the first level.  I played the 2nd level several times and there were just too many enemies for me to stand a chance, by mself.  I needed to play mistake-free, and well, I was fairly to new to the game, so that was hard.  Heck, I even found level 1 to be hard - with my minimal skill level at the time, facing four AI's meant I had to be fairly mistake free, playing by myself.  Might be totally different story with a 2nd player, of course.

I'm not really sure how it fit the theme so much; maybe I didn't progress far enough to learn that, but I don't know.  It's a fun, nice idea though.  I bet it's more fun 2 player.  I'll have to try it 2 player later.

Ok, thanks.  Found it, learned it, hopefully won't forget it.

I posted a game 9-10 days ago (whenever) for LD40.  It was the first thing I ever posted on here.  (It was very smooth process, btw - good job itch.)  Hadn't really dove deep into the page site until today, when I realized that the one screenshot I have uploaded (apart from the cover image) does not display.  Do screenshots also need to be in the same size as cover images?  Is that the reason?  If not, why can't I see my screenshot anywhere?  Thanks.

(I'm also asking because I was starting to set-up a new project page, in preparation for a new project upload in the next few days, and I have screenshots...)

Nice.  I found this from ludum dare 39 results.  Congratulations!

Your work has been featured in a tiny game I made.  Version 1.0.0 is now actively available to play at

If you would like your attribution to appear differently, please let me know, as I intend to do a new version update.