Submitted by Plastic Diamond (@plasticdiamond1) — 6 hours, 53 minutes before the deadline
Add to collection 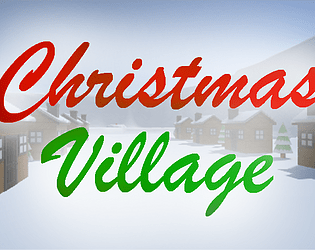 Cute graphics, nice start! I included it in my GameDevNetwork: The Big Festive Game Jam compilation video series, if you’d like to take a look. :)

Seems like there's a minigame about candy canes, and some hidden gift boxes around. As for the snowball fight, I guess its not clear that you lose, as the screen immediately cuts back to your original location. Needs more feedback as well e.g. when the snowball hits others. Love the atmosphere and the cute 3d models though!

Thanks for the feedback, I'm glad someone found some hidden presents. It would be nice if there were more audio and visual cues in the snowball fight so I'll keep that in mind.

I found it very hard to play on PC, controlling 2 characters on a keyboard. As the camera is always between these 2 characters, play alone sound like lonelines for me . A 2 players game in my opinion! This has only 2 minigames?

I know it's difficult to control 2 characters at once especially with the keyboard but I think that's part of the fun. There are only 2 minigames, I had more minigame ideas but didn't have time to add any of them.

Very nice and fun! I played it with a friend and we both believe that it will shine as a lan game. the music is in tune with the enviroment. Will you continue to develop it?

I will definitely make some minor changes and fix a few things when the jam is over but I don't think i'll make it bigger than is.

This is the first game I checked out in the jam, because of the cover pic.  3D always impresses me, because I don't know how to do that yet.  From the very beginning, there's a pleasant, consistent atmosphere.  The game looks great and the music is appropriate.  While there is feedback when you get hit by a snowball (the stars above your head), there's no similar feedback when the AI gets hit, they just leave.  So, that might be one thing to think about adding - stars above AI head too.

I played this one player.  The benefit of having a 2nd player standing there with me was they could be a decoy, which seriously helped me.  That being said, playing one player, this game is tough beyond the first level.  I played the 2nd level several times and there were just too many enemies for me to stand a chance, by mself.  I needed to play mistake-free, and well, I was fairly to new to the game, so that was hard.  Heck, I even found level 1 to be hard - with my minimal skill level at the time, facing four AI's meant I had to be fairly mistake free, playing by myself.  Might be totally different story with a 2nd player, of course.

I'm not really sure how it fit the theme so much; maybe I didn't progress far enough to learn that, but I don't know.  It's a fun, nice idea though.  I bet it's more fun 2 player.  I'll have to try it 2 player later.

Yes thank you for this comment. I know the snowball fights are very difficult and I should have made them easier but I think if you're playing with 2 players it will be easier. I can manage to beat it by myself but even I struggle and have to keep trying over and over. There are secrets in this game which is where the surprise comes in but I'm not sure if I should just tell everyone or wait and see if someone figures it out.

good game, i love the environment, and music of course,

but if you ask me for one critiques, i consider to suggest adapt the camera by two's player separate while they move to different direction, bit late i realize, its multiplayer haha

its fun when i play the candy section. but little bit confusing with snowball, is it just to avoid the snowball throwed by AI or what ? but thanks for made this game, im enjoyed this

Thanks for the quick comment, I appreciate any feedback. In the snowball fights you have to throw snowballs at the enemies and stay away from them. To throw snowballs with Keyboard it's 'e' and 'ctrl', and with Gamepad it's R1/L1.