It's morning and you are drunk. Try to serve yourself breakfast.
Submitted by jptsch — 1 day, 15 hours before the deadline
Add to collection 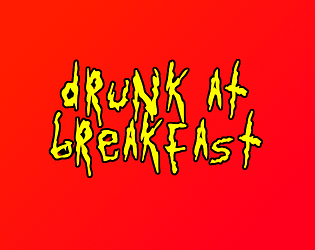 TV Show Name/Season/Episode
Rick and Morty, any episode at breakfast

Episode description
Some drunk person is trying to eat breakfast.

Please list any pre-made art/music/other assets that you used.
Music: "Ian Both Of Them" by Elvis Herod From the Free Music Archive CC BY-NC-SA 4.0
SFX: freesfx.co.uk
Fonts: Get Schwifty & Ink Free

Anything you want to say to players before they play?
Try to serve yourself breakfast. Bring the box of cereal to the bowl using the arrow keys to swing your arms.

I love anti control games! The goal was kind hard to figure out (as in, where/when you need the box in the bowl) so maybe a little extra feedback there would be nice! I think you did a pretty good job other than the feedback or objectives in some levels!

It was fun, but also really frustrating. I get that it's supposed to be frustrating, but I felt like it wasn't frustrating in a "good" way. It wasn't just that the controls were difficult, but they were difficult because they seemed entirely random and like I had little to no control of what went on in the game. It seemed like how the arms moved were completely random regardless of what arrow keys I pressed, and at some points, the arms wouldn't even move. It turned into a game of "spam random arrow keys until it happens to go where you want it to."

I played to the very end, though I didn't get to see the end screen since I was still holding down an arrow key from the last level, so it skipped right over it and back to the beginning. Another thing I noticed was flickering text (the instructions shown on the first level was one of these). Another problem I had was that sometimes I won without understanding why (the item not being anywhere near the bowl). At one point, I punched a bottle of Vodka into oblivion and it took me to the next level.

Despite being frustrating, I found it fun, though having some sense of control would've definitely been nice. I like the concept as well as your interpretation of Rick drunkenly eating breakfast.

Thanks for the in depth review!

I agree with all your points. You have a really good eye for games! I didn't have time to polish it so it is what it is! :)

Just wanted to add a few things because you were so nice to review it so well:

Yes there is a bug where the goal objects sometimes will unintentionally push a player to the next level.

The test flickering is intentional.

There is a "final screen" but it's press any key to continue, so yes it appears to be a loop because most people are pressing on the button to play when the screen comes up.

So yes, for it to be a "real" game, it definitely needs more love! Thanks for playing! :)

I admit I didn't spend much time playing it, but I thought it was cute and I'm glad I checked it out for a few seconds :D Gotta love Rick <3

Haha it was funny trying to be Rick and drunk! Flapping arms over a cereal bowl makes me feel like a weirdo and a genius simultaneously. Good job! :D

I certainly felt drunk at breakfast!

I wasn't quite sure how to use the arrows for which arm, but I imagine that's part of the appeal of being drunk!

The arrows move both arms at the same time. :)

Pretty cool to feel like Rick once in a while.

This game is a masterpiece.

Submitted
The Bane of Ramses
LikeReply