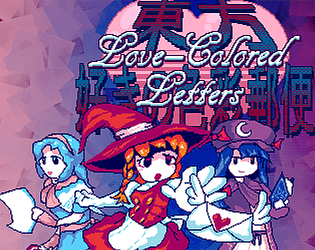 Quite the fun arcade game!

I wonder if there's some inspiration to Patchouli being a looming menace in the stages. Is the game screen glitching due to her sheer jealousy?

I was trying to reach the "end of the game", until I realized there's none since it's just the same level layouts with different skins. Since I was on the quest towards the end of game I was wondering why there was no pause key.

But now that I know better I tried going as far as I can: 20 stages is my limit, like hotdamn after stage 17 it becomes so wild! There were enemies immediatly jumping into pits with the letters, and some enemy-dropped letters falling into pits or other enemies. I must say those moments made me slam the table.

But I really enjoyed the bonus item mechanic, it puts a strategy touch and got me starting the game like 6 times before I moved on. I'd say if the enemy-dropped letters have intangibility while flying and a bit after landing I'd have gotten farther, heheh.

Quite the NES game we were looking for xD
Its so fun to play, but cutscenes get very annoying quite soon, didn't get to the final levels, but I can recognize a good game when I look at it.

Title screen its amazing, I loved the retro style logo, but the characters seem to lack attitude, even so, its overall amazing.

Loved the game, super good aesthetics, tight gameplay and those cutscenes were more like cutescenes

This is a really interesting concept! Kind of frustrating at times but it’s challenging.

The retro aesthetic is spot-on and completely consistent in all areas of presentation, a rarity for these kinds of nostalgia-type games.

Unfortunately the high amount of time you spend stunned when you get hit, and all the waiting for power to regen/waiting for the overheat cooldown (which only takes a few shots to accidentally trigger) can make the game feel kinda sluggish to play, especially when there can be so many enemies with letters to chase down all at once.

Not saying it's a non-issue (because it is an issue) but it's funny you mention how long it takes to get back up since when stun was first added it was about twice as long as it is in the game right now. If we ever update the game we'll probably take a look at it and see what we can do to fix it.

Really cool and fun to play. Reminds me of Megaman which I really like. Artstyle and cutscenes are great.

I do wish the cutscenes and the "deliver X messages" at the start could be skipped through.  Would make going through the game feel a lot faster after you see all the cutscenes.  Especially since there are a lot of levels.

Also while I know they are colored after pride flags, I do think Alice and Patchouli would look better if you left their hair color alone (and applied the color somewhere else on Patchouli). Just my opinion though.

I really enjoyed every aspect of this game, from graphics to music to gameplay! That said, I do have a few quibbles:

- The cutscenes loop every three levels and appear to be unskippable. They get a bit boring to watch.

- Dying takes away your special weapon and resets your power bar. In later levels, where huge swarms of enemies are the norm, this is a recipe for almost insurmountable failure--you have to make a dash for the mimic and hope you can take them out before you get overwhelmed or lose a letter somewhere.

- A letter goes flying when the enemy carrying it dies, which is neat, but it can potentially bump into another enemy (annoying) or a pit (kinda unfair). In later levels, where losing even one letter means failure, this feels really bad.

It's very cool and I enjoy the concepts, but there was a visual effect (I think) relating to Patchy that hurt my eyes and it made it hard for me specifically to play the game. The cutscenes were adorable

Really cool, but also so frustrating, mostly cool though

The aesthetics here take me way back. I like the enemy diversity and challenging gameplay. Patchouli with her annoying shenanigans is a nice touch as well. I do find myself unable to discern between solid / non-solid / floor-only blocks sometimes, which sucks when you are being converged upon. Nice game overall.

Its very funny and totally Lgbt. Love the retro and music.