Race against time to warn your forest animal friends of the logging machines in this 3D action/platformer game.
Submitted by andyman404 (@andyman404) — 1 hour, 49 minutes before the deadline
Add to collection 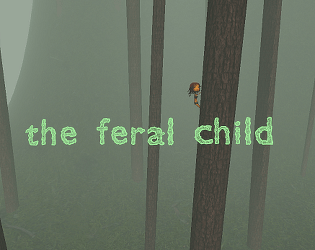 Awesome graphics, great game! I included it in part 1 of my Public Domain Jam 2 compilation video series, if you would like to check it out :) https://youtu.be/xbZmIYuD92U

I like that running is far slower than moving through the trees, so it gives you a real advantage if you can master the mechanic - which, I might add, ended up being much easier to do that I thought it would be.

Also, thanks for sharing the initial plot design in the comments; nice to see the dev's pre-jam vision, some great twists on the source material in there!

Really cool mechanic! A bit tricky at first, but quite fun once you get the hang of it and can traverse the level quickly (not unlike some of the 3d spider-man games). Great job on the mood of the music too, really conveys both the jungle rhythm feel and the immediacy of the machines' impending destruction.

Here's a hint on the climbing/leaping:

When you're on a tree, hold down the direction you want to leap in, and then press jump. Then you'll jump in the desired direction.

If you keep the jump button held down, then you can swiftly leap from tree to tree to tree continuously (assuming you maneuver in mid-air properly).

If you just press jump without holding down a direction, you'll just jump away from the tree in the direction your back is facing - this allows for accuracy when jumping in a specific direction.

Thank you for all the feedback!

I just wish I had more time and didn't lose 2 days reworking the original Tarzan game into Jungle Book after I found out that Tarzan is not public domain.

@Kara Jayne: Sorry. Poor Baloo is only dead because I ran out of time to make actions/animations/dialogue for him. If I had a couple more days there would have been something like this.

@Norbez - Sorry, I didn't get to finish the respawn feature. The clumsy reload feature somehow messes up the FPS counter.

Replayed it. I didn't find Baloo the first time and now I'm sad.

LikeReply
Deli InteractiveSubmitted6 years ago
Wonderfully creative use of the source material. Seeing the tiger stripes on the saws for the first time put a big, nerdy smile on my face. The tree climbing/jumping mechanics as well were pretty spectacular, albeit hard to get used to. Reminds me of the core webslinging mechanics for the spider man games, in that getting around the world is inherently fun. This game was begging for a rotatable camera though, as I would frequently find myself doing leaps of faith and usually dying as a result of it. Still, wonderfully creative take on the story and that's one hell of a fun central mechanic!
Submitted
Lair of the Morlocks
LikeReply
donboodySubmitted6 years ago

Sound is great, sets the mood perfectly. I had headphones in and when I saw that Baloo was dead it was one of the first times I saw one of the tiger saws and it revved it up at the same time, it was great. Really nice work.

Submitted
Captain Hook is Out of Time
LikeReply
stephen.gurnettSubmitted6 years ago

Jumping mechanic works nicely though the initial run to the left had me jumping blindly the first couple of times through. Once I started heading north it felt a lot smoother and clicked for me. Indeed, I was worried that going straight into the screen would have the foreground trees obscuring the direction of travel but it doesn't feel like an issue whilst playing. Nice work and congratulations on getting as much done as you did. I enjoyed the dev videos you posted as well (particularly the 3D modelling).

Really like the jumping/climbing, and the sound is very good too! Nice job :)

It's very enjoyable to just jump around the jungle! Smooth jumping/movement mechanics and the music sets the mood nicely. I'd love to see this finished, and maybe even have a calm setting to just explore the jungle as well :)

Nice graphics, and the music is pretty swell. When I heard those beating drums, it set the tone for the experience I was about to take in. I liked that going behind a tree would cause me to see a white outline of myself; great idea.

Haven't beaten the game yet. However, when I died (fell twice) and pressed R to restart, the game started going really slow, 2 FPS. Just wanted to let you know; btw, playing on Windows.

(I'm also in this jam, by the way, with my game HummingBird Haunting! Check it out? I'm always open for feedback: norbez.itch.io/hummingbird-haunting)

The jumping and climbing mechanics work very well. Too bad you didn't have enough time to finish!