Short action/adventure game about the ancient queer poet Sappho...
Submitted by ｔｅｃｇｏｔｈｉｃａ — 9 hours, 43 minutes before the deadline
Add to collection 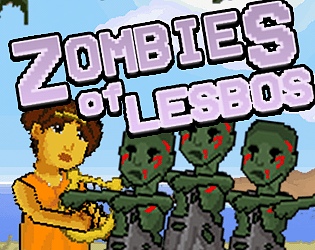 Great sound and graphics! I included it in part 1 of my Public Domain Jam 2 compilation video series, if you would like to check it out :) https://youtu.be/xbZmIYuD92U

Really outstanding sound design and art! I especially love the fire and sleep effects, along with the bone animations (zombies bobbing and flailing is hilariously perfect) and the strings/drums/chanting, it makes the whole experience mesmerizing, quite appropriate for the source material. Kudos!

Really nice idea! The game mechanics are really fun, especially the kiss thing! I was not sure what the benefit of the sleeping song was compared to the other one, so I killed all the zombies :D

I'm not sure how to win though? Maybe I missed something. I picked all the scrolls and did not know where to go next, and when the time ran out, it was over :D

Submitted
Estranged
LikeReply
DeliInteractiveSubmitted5 years ago
Clever ideas and inspiration here! Also love those animations; punching, kissing, and playing the harp were always inherently fun given the well-done but simple animation and design work that went into them. I will say that the UI, while clever, did look a little jarring when compared to the color pallete and nice artwork for the characters/backgrounds. Overall had fun with it though; and I now know more about this philosopher thanks to this game for making me curious about her!
Submitted
Lair of the Morlocks
LikeReply
donboodySubmitted5 years ago

This was really cool, nice job. Fun idea using the kiss to get life back. I didn't notice it was giving me life at first, it was a cool "a-ha" moment.

Submitted
Captain Hook is Out of Time
LikeReply
ｔｅｃｇｏｔｈｉｃａDeveloper5 years ago

Thanks for the feedback stephen.gurnett. It was also always the plan to be able to enter the houses (open doors you can't enter is a huge NO-NO in game design) but unfortunately I was running out of time and had to scrap it due to the interior art.

>> Am I a bad person for expecting Aphrodite to arrive and cast Turn Undead?

Norbez You can try the new builds, I have a 64 bit build as well, hopefully you don't get the .dll error again. The game also runs in browser in Firefox.

Well done! It was funny and cute. I like how everything, even the UI bars kept consistent with the setting.

Very nice work on the animation and graphics. Good cohesive feel to the world and characters which I think comes from it not being tiled on a grid and the subtle use of parallax scrolling as well as keeping the animations from being too large. I particularly liked the style of the buildings and was a little disappointed I couldn't go in them.

It would be nice if the game paused whilst showing the scrolls... I couldn't read them without being savaged by a zombie horde ;) Though it did mean I had to go and find the original poem which in turn led to others so... mission accomplished?

Also, the camera lets Sappho get ahead so I'm sending her running into the unknown. It's not a big problem since it's not so fast paced that I get into trouble or miss things but it feels a little off.

Am I a bad person for expecting Aphrodite to arrive and cast Turn Undead?

When I download and unrar this, & click the icon, I get an error that says Unable to load mono library from "C:/Users/Norbez/Downloads/ZombiesOfLesbos_Win_V1/ZombiesOfLesbos_v1_Data/Mono/mono.dll" (error = 126).