You are shrinking and must find the antidote!
Submitted by Dare Looks (@DareLooks), LevelXProject (@LevelXProject) — 3 hours, 40 minutes before the deadline
Add to collection 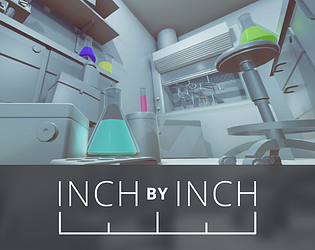 I really had a blast with this! Even in prototype form, there's a lot of potential here.

One thing I noticed - whenever I tried to microwave anything, it was an instant game over, even when it was the correct reagent in that run. Not sure if that got fixed in the update, but if not, I felt I'd better call it out.

The other thing I wanted to mention was that it seems like this game might very easily lend itself to unwinnability without considerable effort on your part. For example, in my last run, there was a reagent on top of the wall cabinets - I noticed it before I was quite too short to get up there, but if I hadn't, the run would've been cooked and I'm not sure I would've known it - that was the first time I'd seen anything up there! That's not something it seems possible to handle perfectly in all cases - I'm not even sure that kind of complex path prediction is possible, and I'm almost certain it can't be done in less than exponential time, which would have to make it a non-starter for a game that needs to run at or above 30fps. I'm not really sure what to recommend! But, again, I felt I'd better mention it.

Other than that, I wouldn't change a thing, and even just playing it a little while I had a lot of fun! It felt like a real challenge, and the need to act quickly and correctly under pressure makes it exciting. Thanks for making it, and I'm looking forward to seeing it more fleshed out!

Submitted
introduction for a game
LikeReply
EdmangSubmitted2 years ago(+2)

Cool concept, good aesthetic, I really enjoy what you did here and can see it having many more levels and becoming a strong puzzle game.

This was tough! Took me 3 tries before I got it. Love the concept and I love that you made it generate a new challenge each time so you can't just cheat and memorize what you need to do.

Thanks for checking it out! :D

This was really challenging! I didn't actually finish the tutorial too, because I hit a game-stopping bug: if you mix something and then put it back in the mixer, you can't take it back out again!

I enjoyed the main game portion too--finding new (and often glitchy) ways to get up to different areas was fun, even if I ran out of time!

Yesterday we've spent quite some time on making sure it's as unbreakable as possible, so stuff like this hopefully isn't going to happen in the next version! ^^

Phew, I think this one is a bit too hard for me. X3 I'm not too good at juggling this stuff in my head under pressure. But I love the concept. I'd probably do better if there was less time pressure on the shrinking, but I get the sense that might be part of the appeal. It certainly would be if this was about one of my kinks, I think. X3

I do find that there's something cathartic about mixing and making things like this, so it's something I'd be interested to see expanded on.

A new version is on its way to provide important fixes and other improvements, such as difficulty settings!

Oh this is fantastic.  I love change-of-perspective stuff.

I super dig the aesthetic; it didn't even occur to me that everything is straight up untextured until I'd been playing for several minutes.  It works really well!  The most important things are the text and the chemicals, and they both stand out about as well as they possibly can like this.  It's a cool aesthetic besides, and drives home "sterile lab" better than any sterile lab textures could.

I can imagine a whole series of different lab setups you have to navigate, with different lab equipment and hidey-holes and maybe even places you deliberately can't get into until you get small enough.  You've got something really slick here; run with it, imo  :)

We're so glad you like it! Thanks a lot for the nice feedback! :D

I was going to rate this first but teeny started crying when I ran it so I have to run it later on monster and that'll work!

Submitted
introduction for a game
LikeReply
blood-line3 years ago(+2)

Is it just me, or this game has nothing to do with strawberry game jam theme at all ?

It may not be obvious, but the game is based on a kink and thus in the spirit of the jam - at least by our understanding!

this is how you get five stars in stealth!!

this made my night, what a novel approach to micro

Agreed, as a macro/micro lover myself this was a treat :)