Made for "So bad it´s good" Game Jam. A game about no progression.
Submitted by Wes_Blanko — 1 day, 3 hours before the deadline
Add to collection 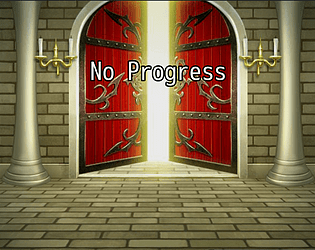 If you have implemented the modifier, how have you done so?
One Button opens the End of the Level. And you have to enable this one button.

Any additional information for voters?
Have Fun I guess (tho it´s bad)

One of the most pretty looking/polished visuals games in the jam. Interesting puzzles, and a quite a bit of content. Just a heads up, standing to the right of the magical girl, when answering vinegar to the question, in the level where you have to repair the robot the first time, crashes the game.

Ah an RPG Maker entry! This is my first time playing anything made on MZ. I liked how terribly simple the game was and how  each solution  didn't get harder, it just got more tedious. But then you had to throw the maze haha. Luckily using mouse click makes it a little easier to navigate, but I spent a lot of time getting stuck until I figured out there was a simple formula lol. The loop ending was genius too! Map design was barren and terrible, I did kinda wish there was just a tad more sound effects and some music, but it works in the favor of its badness. Sadly it is not that replayable, but I enjoyed it nonetheless!

Got stuck on the invisible maze. Had a good time though! :)

Really enjoyed the idea! I liked the idea of a puzzle constantly building on itself,  and it didn't get repetitive or tedious until the time it 'ends'. I  managed to break the game twice lol, once when talking to dog from the left, and again when talking to the woman twice.  Wasn't a big deal though  as  I could just load an autosave.

Well done on submitting, and thanks for taking part in the jam!

Submitted
Heart of the Cards
LikeReply
EnygmaticSubmitted172 days ago

I found it interesting how the levels escalated and the concept is neat, though frankly I found it kinda tedious when I got to the invisible maze section. I was able to brute force it eventually and made it to the "end" but it wasn't exactly fun. Then again maybe it wasn't meant to be. Some of the dialogue was funny and the idea itself I think is funny. But personally I found the gameplay to be lacking.

I liked the humor in this game. Invisible maze :)

This was a fun little jaunt.  I really like the idea.  Nice.

I think that the puzzle concept behind this game is interesting. It's like a bunch of mini-quests from an mmo, but structured in a "math circus act 5" sorta way (if that makes any sense). Though, in my opinion, it suffered from lack of variety and consequences. For example, I can go up to the dog at any point without the bone, and nothing happens. What if there was no bone for one of them, but the dog chases you? Then you could go up to the wizard with the dog chasing you and have the wizard run away in fear.

Submitted
Heart of the Cards
LikeReply
XCVGSubmitted174 days ago

It's a neat idea for sure (not going to spoil it for those who haven't played it), and the concept itself certainly can be considered "so bad it's good".

But it just doesn't quite work for me. I think there's two issues at play. One is that making the tedium into a joke doesn't actually make it less tedious or more fun past the first repeat. It's not a bad joke, per se, but it needs something else to make it more interesting. The other issue is that there's nothing really driving me to push through it- there's no promise of a payoff in any form. It feels pointless as it stands.

I made it to the invisible maze and then just kind of lost interest.

Other than that, I'm never a fan of stock RPG Maker art, though it's never terrible either. I wish this game had a little more sound, and maybe some background music.

I honestly love this but the invisible maze killed me!!!! Love the loop!