A challenging platformer, A search for cake, A very aggressive bird
Submitted by Firelord Bob — 2 days, 11 hours before the deadline
Add to collection 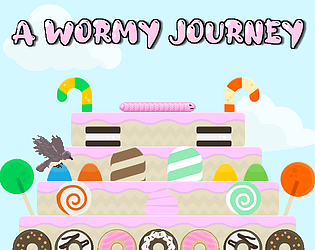 If you have implemented the modifier, how have you done so?
Winning this game may be quite impossible. The worm is often reminded how futile his attempts to reach The Great Cake Mountain are.

Any additional information for voters?
This game is fairly difficult, but if you pay attention to the tutorial you should be able to figure out the basics. Good luck!

This is such a nice game! I included it in my compilation video series of the ‘So Bad It’s Good’ Jam, if you’d like to take a look. :)

1: this game is unironically good. like, seriously. it's so good it's good.

2: it truly does say a lot about our society

This was actually really fun and a very good game! I liked the art and the music. The controls were surprisingly usable for how crazy they are! Level design was also pretty great, very varied with unique challenges.

I didn't see all that many SBIG elements, except for the dialogue, maybe?

I guess the ending could have been nicer with an added picture or something, but it was very fun and a very polished entry! Great job!

Brilliant game. Very creative mechanics! So good. Not bad at all.

Brilliant game. Very creative mechanics! So good. Not bad at all.

It's a really, really cool gameplay concept. I think it has been done before, but it's the first time I've played it, and it's new to me.

The game is, for the most part, very polished, and feels like a real commercial indie game.

The graphics and music are just super nice.

The jump pads are super frustrating. I managed to figure out all obstacles up to that point but couldn't get past the level with the jump pads.

I pondered this for a long time, probably far longer than I should have for any one game. I played it, put it away, and came back later. Ultimately, I think the answer is no. It's not so bad it's good. It's just good. The only thing on the fence is the gameplay and really I think that's more innovative and interesting than bad in any way.

Difficulty and a weird movement method. I like it, but I'm not sure how well or creatively it fits the modifier.

The game does not play well with DPI scaling on Windows at all. I'm running a 4K monitor with 150% scaling and the UI breaks horribly unless I force system scaling for the app. Even then it screws up my screen resolution and some things still break.

EDIT: I just realized that a build with GUI fixes has been released.

Hi, thanks for the detailed response, I'm impressed that you are giving all these games so much thought. I ran into some issues trying to get the balance right between bad and good. At first my playtesters could barely move and I had more emphasis on carrying objects through the levels, but it was exceedingly difficult. I figured I'd err on the less frustrating side (and probably spent more time than I needed on polish for this jam). I also wanted to mention that if you weren't seeing the dialogue you probably missed a lot of my implementation of the modifier, as the other characters were frequently reminding you how impossible this game is. Thanks again for playing, and I'm glad you liked it!

Really fun to move around and all-round highly enjoyable.  Really struggling to find anything bad here though - solid game mechanics, nice-looking graphics, good soundtrack.  I think this game might be So Good It's Good.

Awesome navigation mechanic. Super hard to master. I loved grabbing hold of snails and going for a ride.

I mean in this in the nicest way, I think this game is too good for this jam. Hardly any jank at all. Really wouldn't be surprised to see this idea iterated on and made into a full release.

Thanks for the comment. I was hoping that the movement mechanic would be difficult enough that it would qualify as "Bad", and before I added the tutorial I think it was. The play testers could barely get anywhere, but I think the tutorial might have worked to well for this jam.

I had some scaling issues which mean't I couldn't see the dialog boxes, and couldn't seem to get past the second level.

Aside from that, it seems rather.... polished? Possibly too good for this jam, but very enjoyable nonetheless. The controls kinda remind me of "Mount your Friends", and the aesthetic is very cohesive. Overall, this has the makings of a very good game.

Thanks for the dialog box info, i hadn't tried with different screen sizes. I probably did spend more time on polishing than necessary for this jam, I ended up with more time than I expected after finishing the core gameplay for it.

edit: I added a version with the GUI fixed to the itch page for the game, obviously only rate the one submitted on time, but for anyone who runs into that issue and wants to play a fixed version.

I like it. It is quite difficult when you start but the worms moves well when you learn the basics.. well done.

Submitted
The last Trip of the Magic Bus
LikeReply