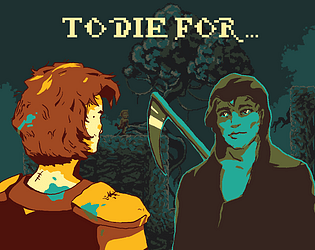 Really cute use of the theme, loved chatting up death. I didn't get to the end but it'd be cool if the relationship with death led to something, does it? The sound fx are a bit loud, but really cohesive style overall!

Very interesting art on this one! I also like the music, sound effects and typing text during dialogue sequences!

From a gameplay perspective, I agree with others in the thread that would prefer slightly slower character movement. But then again, if the character was easier to control you would converse with Death less, which seems to be the main focus of the game!

Death is a SIMP! haha

Enjoyed this. Dialogue is funny, artwork is good and the sound fits the mood. I would just suggest slowing down the player movement especially the jumping, it didn't feel very natural.

Found the controls/level design maybe a bit too challenging for me, so ultimately wasn't able to experience the whole game. The jumping was maybe a bit too twitchy, not sure.

Flirting with death was fun, but in terms of time got quite punishing due to the game resetting the level each time.

Overall I loved it! Funny writing, good controls! The movement speed was a little too fast for me at some stages. The fact that there's  different dialogue choices adds replay value!

Hi! Just a reminder of this rule: " To be eligible to win any of the prizes, your team has to play and give feedback to five other entries by Monday, 5th October 2020".

So if you haven't done it yet, you still have the rest of this weekend and Monday to give your feedback!

Really fun experience, the writing was super fun to read through their quips at each other. Art style is great with really strong colour coordination. Great stuff!

This was 🔥. Reading aint even my jam but that dialogue, gahd damn hella spicy. 😊
I'm a fan. 🙌

I really enjoyed this game. The color scheme is fantastic, the music was super fitting, and Death has never been hotter, smoother or naughtier. A platforming game that is really all about flirting is my kind of game. I couldn't have finished without Cukia taking over at some point because it got a little too tough for someone as impatient as me, but it was really well designed and paced for what it was trying to do. And I'm very glad you let me choose to be my own hero in the end, although I was very tempted to find out what kind of "experiments" Death had in stock for me ;)

I would definitely buy this game.

whew! after dying 666 times, i finally finished. i liked the art style (death do be looking fine doe). i got annoyed because i didn't know that i could press escape to skip text ,so every time i died which was all the time i kept having to sit through all the text i'd already read through until i pressed escape .  once i figured that out i had a lot of fun  playing

Oooo, this was clever. Got me feeling like the fatal elements in the world are actually another character, never felt that before.

The dialogue was really tight in this. Honestly felt like it came together so well that I ended up suiciding a few times just to chat to D. He's pretty dreamy. Very excited to play more stuff by the writer(s) in future.

There were a few times I wished for tighter horizontal movement. It felt like I slipped / slided a bit more than I'd like leading to a few deaths that didn't feel like they were my fault. Also wish I could jump forward in dialogue a bit. This did a great job of mixing up lines so conversation usually felt fresh but the few times I saw repeats really had me wanting to hit space to jump forward.

PS. I played the bug fix build and had no issues with jumping.

Too buggy for me to play through though. Spacebar only makes me jump sometimes, maybe 1 out of every 4-5 times I press it. Did you perhaps put the jump logic in a FixedUpdate loop instead of Update? Then I got stuck in a roof near the 2nd door :'(

Yo :) thanks for the nice words. <3
We had some trouble replicating the jump thing (we found a device that had it; and it was SUPER ANNOYING), It just wasn't showing on the dev devices... The bug actually appeared when we fixed another jump issue right before deadline and it just ended up worse.

We pushed a post-jam build that you can check out if you want to see the end. The build is alot closer to what it was and what its supposed to be (in theory).
If you find any more bugs please let us know! :)

Super fan of platformers and pixel art so this game really drew me in. Good color scheme and fun character animation!

Quite a funny story to boot with a twist on the usual narrative or damsel in distress.

Great use of a comeback mechanic that's also built into the story!

My only gripe is the platforming was a bit too out of control, unless that was the point.. in order to get players to die more often that naught.