A metroidvania for the Sega Master System
Submitted by Arkia (@arkia13) — 1 hour, 20 minutes before the deadline
Add to collection 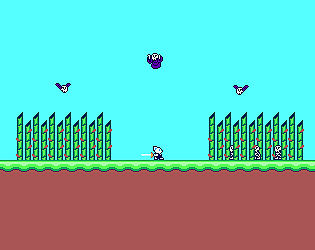 What emulators, hardware revisions, or fantasy console can be used to play your game?
MEKA: https://www.smspower.org/meka/

Nice little gameplay demo. I could see this being a fun game with proper level length added to it. I'd definitely like to see more. The graphics are also nice, gives me a bit of a mini-wonder boy vibe.

I fully agree with Max but also add that the end enemy was a little confusing. I somehow expected it to be some "interactable" character and ran into it, expecting a dialog or something. I was also half-expecting the bamboo to hurt me (but then realized it was too tall and was probably just a prob. Kudos for having the character going thru it - I've noticed the effect!).

Those are just minor points that could be made more explicit in future versions.

Another point to add: tested it a FPGA core (MiST compatible) and the game hang shortly before starting. Did you get the chance to try on real hardware? On emulator it ran just fine.

I wasn't able to personally, but someone on the Discord did test a build on real hardware and didn't mention anything like that.

I liked the art style but the game was really short. I hope you would be able to continue it

This was realy short, not even the first screenshot in the game page existed! I wonder why.

Also no sound at all.

Other than that the game felt solid and as it looks like you have a platform engine setted up for Master System to expand it.