Button mashing is bad for you
Submitted by NuSan (@NuSan_fx) — 9 hours, 31 minutes before the deadline
Add to collection 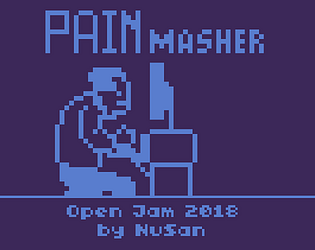 Interesting game. I included it in my Open Jam 2018 compilation video series, if you’d like to take a look. :)

It is truly amazing what you were able to achieve with TIC80 in just three days ! Everything is just really polished and feels good.

Liking the color scheme changes and music pitch changes when you pick up some items to heal the arm. Also watching the spammer as the middle-man to carry out my actions was interesting. This is the nicest zombie-related game I have played thus far. I thought I was going to get chased around. I never figured out how the mental bar plays out.

This game is hilarious. It's like it is telling you not to play it, somehow. I think there's some potential in the balancing three bars, although its a little confusing too. The fact that the zombies don't attack you doesn't seem right either. Might be better if there were less and they did, and then if the Wrist meter was more forgiving. Then the painkillers could help with both Wristpain and Zombie damage. I liked how they affected vision, you could even farther with that effect. Maybe seeing the zombies or horrifying things in the wasteland could take a mental toll too (like Cthulhu?), giving the Mental meter a second purpose... right now it just seems like a cap on how long you can play? Unless you're willing to wait for the pain to go down. Which, you know. I'm not. I'm here to Spam.

What if you played a bunch of times in a row and the computer guy turned into a zombie too? Just a funny idea I had.

The art and sound are amazing, great presentation. The gameplay wasn't as clear but it was fun nonetheless.

Submitted
Pinball But It's Only Multiball
LikeReply
Dustin WoodsSubmitted2 years ago

I enjoyed the subtle details, like the title screen transition. The atmosphere was engaging. It reminded me of being ill - mashing through pain, drugs. I almost smashed all the zombies with the patient strategy of waiting for my pain meter to go down. I might play again in hopes of smashing them all to see what happens. The game over screens were comical.

I wish the pain and mental meters were easier to glance at.

This is a very weird one for me: The game is done well, controls are clear, gamejam theme is hit well, movement/actions felt pretty good - but somehow I just didn't enjoy playing. I think I mainly didn't enjoy the theme. Additionaly it seems to me that the "optimal strategy" is killing one zombie and then waiting until your pain is 0 again.