Made for the Nokia 3310 Jam 3
Submitted by RetroRealms — 10 hours, 32 minutes before the deadline
Add to collection 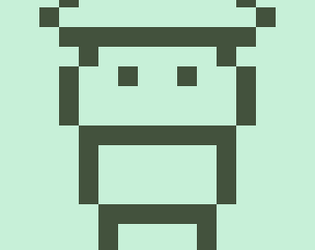 Yaay I made it to the finish! Was super difficult at first but then I took it a little bit easy and managed to finish it :)

Thanks for playing! I hope you enjoyed it!

Submitted
On the Flipside
LikeReply
RetroRealmsDeveloper292 days ago(+1)

Really like the character design and animation. Those little dudes running at ya had me laughing too, nice job!

Thanks for playing! I really enjoyed your game too!

Nice! The controls feel pretty good but I feel that the spikes collision masks are a bit punishing, making them a bit smaller would help. Also I would consider adding "coyote time", it usually helps a lot with game feel.

I'll that to my collection of colliders complaints! Anyways, I will try and learn how to add "coyote time". Thank You for playing and rating my game!

A cute little platformer! I liked the music a lot, you might consider smoothing the camera a little bit and make the collision of spikes a little narrow-ish, very enjoyable platformer!

I will fix the colliders after the jam. Thank You for playing Nokia Pirate!

Thanks for playing it and rating!

Solid game that could go on to be great. Some spike colliders were a tad too big and made it hard to funnel through the tight spaces.

Yep, I've got a few people saying the same thing. Thanks for the feedback and Thank You for rating and playing my game!

LikeReply
The Sun KingSubmitted294 days ago

Thank You for playing and rating my game! Although I could've made a bit easier, but thanks for the feedback.

Oh man those spikes were driving me crazy!!  I had to be extra careful constantly! Nice little platformer, it kept me on my toes!

Once the jam is over I will update and change the colliders of the spikes. Also, Thank You for playing my game and giving feedback.

Nice game, but something with colliders of Spikes. BTW simple and fun art and design , nothing superfluous

Thanks for playing my game and Thank You for the feedback!  Totally agree that the colliders of the spikes could be revised and changed to have better player feel.

This game is solid. The thing that bothered me the most were the unpredictable hitboxes. I often was surprised that an enemy or spike hit me. In general most games make the hitboxes a lot smaller than the sprite that represents the enemy/spike. So that the games does not feel unfair.

But as I said a very solid game, that was fun to play.

I do agree that the colliders could be a bit smaller, anyways Thank You for playing and rating my game.

LikeReply
Opossum In A JarSubmitted295 days ago

It's ok! It's team fortress 2, I totally get it! Well, what you got there running is pretty good though, it's a shame you coudln't dedicate more time!

Submitted
I Found An Old Phone
LikeReply
RetroRealmsDeveloper295 days ago(+1)

Thank You for checking out my game! I can't lie though, playing TF2 was way more fun!

There is a lot of room for improvement here. The game doesn't follow all the restrictions, or follow the theme, and the enemies got stuck in the corners on 2 occasions. The graphic wasn't bad, and the soundtrack was without a doubt more than acceptable. But I mean, Team Fortress 2 is Team Fortress 2, you did the right thing.

Thank You for playing my game! Although I'm curious, what restrictions did I not follow?