Will the real Butler please stand up?
Submitted by Ahmet Kamil Keleş (@aslangamestudio) — 1 day, 16 hours before the deadline
Add to collection 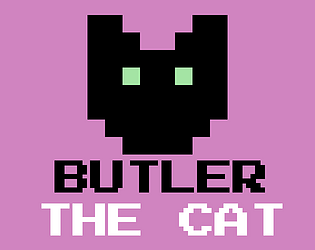 Use of the limitation
All sprites are 8x8

The game is based on Facebook groups "This Cat is Butler" and its variants. In those groups, all black (or other) cats are called Butler.

The meme has a story. Once, a cat owner posted her cat's (Penelopecat) photo on Facebook. Then someone on her friend list stole the photo and claimed the cat was her cat, Butler. This event became the source of a meme, where everyone claimed Penelopecat was their cat or their black cat was called Butler.

this was surprisingly challenging when you got multiple cats, at first i was misidentifying the clock and the cheese but i later figured it out, great tunes also!

Great idea! At first I thought "this seems too simple", but then I realized the other Butlers were moving on their own and the more there were, the harder it was to identify the one I was moving. Very simple idea but very effective.

LikeReply
Chase of BassSubmitted1 year ago

I liked the humor and the creativity!!  Switching controls as the cats accumulated was fun too!  Great job! :D

One can never have too many butlers, unless they're fighting for cheese. If Where's Waldo was an arcade game, this would be it, and it's really well executed.

Gorgeous game mechanics! Simple, but at the same time very cool! I really liked your game! The graphics are good. The sound is good too. The game concept is great! A very good game project!

Very funny concept, it gets really chaotic after a while, which is fun. Music is good too. Small suggestion: maybe limit the spawn of clocks (or make them change your cat too), as right now it's very easy to stack them and play forever.

Thanks, I will think about that!

It gets really fun when you start getting more Butlers!

I liked the music so much!

Its surprising how good the idea is as you get more Butlers. Enjoyed a lot!

Great music. The gameplay was unique as well.

Pretty much the perfect game for this game jam. Great presentation, really retro vibes.  I really thought the concept was creative and that the game was fun, I played it twice already.

I really enjoyed this! Cute and original idea - I was surprised how hard it was to figure out which Butler I was.