A game made for mini jam 63
Submitted by HGJake (@HaplessJake) — 2 hours, 46 minutes before the deadline
Add to collection 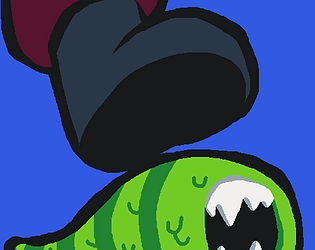 The game is really pretty !

And the game is also super hard !

I really liked it (big fan of platformers), but there are a few things that bugged me... I think the respawning is just a bit too long, not long enough to be really annoying, but just enough to be noticed. Also I think the character has way too much inertia and landing on a single block after a long jump is quite painful sometimes.

Other than that, the sound design is good and fits with the aesthetic of the game and the levels are good (and hard).

thanks for playing the game :) if you enjoyed it enough the postjam download includes a few fixes (though the inertia thing is still there) , some more levels and time records - try and beat me

Really cute platformer! Love the art style and the music. Wasn't as enthusiastic about the slippery floors or dying when I run into the side of spikes. I liked it a lot, though. Nice work!

PS for anyone inquiring about the upload times - I had accidentally deleted the original file on the page and had to reupload it - sorry if this ruins anything...

On a side note though I Have also included a POST JAM update, includes a level fix - bug fix & most importantly TIME RECORDS! try n beat my scores

Really cool entry but really hard at some points, specifically anytime you had to chase after the blocks that open up after getting a key, its impossible to grab the key and keep running, you have to do a jump or you fall instantly into spikes, there isn't much time for a run up on one of the levels because there is a wall right next to it so you have to land on the key SHORT hop cause if you do a full jump you will hit a platform and fall, that one level brutalized me. Part of it was because of how much you slide, minor adjustments are pretty hard.

I eventually beat it tho, and as far as hard things go, it was really satisfying, I got that all important heavy sigh of I did it which felt fantastic. The game is pretty well tutorialized with a wavy at points difficulty curve, but the levels are really good for a jam game and It was satisfying to play.

The collectibles were a fun way to make a level harder for yourself if you want the challenge, and the first one encourgages exploration which is cool.

Art and music were really good, it felt great to play.

i do have to agree that the one level is pretty hard - and probably shoulda been pushed a bit further ahead, glad to know you enjoyed it though :) and ye its defs supposed to be hard

To anyone who plays, was it too difficult/too easy?

Great platformer with cute sprites and good controls. Love the wobble animation of the player :)

Ok, so for starters I'm pretty bad with platformers but the key thing that stands out with this so far is when you die the transition takes so long and during it you can still move, the game isn't bad its pretty good actually but I felt for such a long time that I just had no real control over the player just a general go in x direction. Jumping felt responsive and the user feedback was really good when you picked up the collectable bugs it felt cool and when you squished the bug it was also good tilting on movement and the nice jumps. Still a really good job.

I do have to agree the transitions are currently too long, as to the movement during a transition - i found that out after the submission period XD