Capture the escaping prisoners with your patrol mech
Submitted by ninjacharlie — 1 day, 3 hours before the deadline
Add to collection 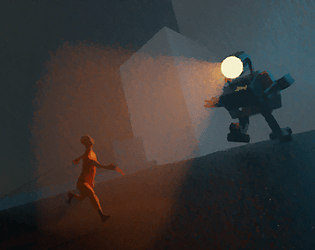 Really unique idea that I think is well executed. The tiny humans running around your feet give a great sense of scale and reinforce the giant hunk of metal you're controlling. Sometimes I found the mech a bit hard to turn but perhaps that was intended.

The mech is so cute! Wish the enviroment was darker so the light effect was more apparent as it's such a great mechanic, it didn't seem to be fully used - as the room is already bright enough to see everything. The effect of the people running in the light and the shadows they cast was great, also the minimap was a welcome helpful touch. Would be into in having another go with a controller. Like the music after tutorial ended and the beat kicked in. The piano part was super short and wayed a bit heavy (seemed very sad and down tempo for a capture scene!) (maybe would work as music from the viewpoint of the prisoner or apart of a cutscene intro to set the mood). I feel evil as I mostly wanted to squish them rather than beam them up! Those big heavy feet, good timing of sound effects and motion gave a good heavy mech feel. A camera spin would be nice (maybe a 90 degree lock to see the battle field at different angles... hard to see some of them hiding behind the blocks). Nice choice of typography too :)

oh wow I loved this one, the mech, the sounds the lighting/shadows - super cool game

I don't think I did too bad either only 3 got away!

Great idea. Great execution. Surprisingly polished for just 2 weeks, and it was really fun and engaging

The controls were finicky at times, but I loved the concept, and the presentation was great as well :)

The controls were finicky at times, but I loved the concept, and the presentation was great as well :)

Really fun game with a great look. The sound effects were really fantastic as was the music, got quite stressed when so many escaped haha

I loved the idea! The gameplay is also very well placed! The problem I saw is that the mech controls on ground don't respond very well and it can get very frustating, It can be fixed by make the mech movement axis be the camera axis instead of the current mech rotation, and the music was awesome!

Fun little game. Occasionally had struggles with the controls though- it felt like I was struggling with pointing my legs in the same direction as the camera sometimes.