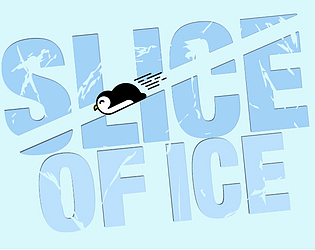 It's neat I think had the actual direction the ice blocked moved on your screen affected the penguin it would of taken this to the next level as it is right now it's kinda just play the game while the window moves.

Beautiful and unique among the others I have seen! I like that the ice really caught my eye as my my screen background was dark. Game play seems interesting, but it would be great to add less slide to the player.

My only other complain really is that the obstacle sprite doesnt match the art style of  the rest of the game and that there isnt much space to move around. Great game if you are doing homework on the com and you feel bored. Overall, good job!

Woah, really interesting game, it's really cool that the ice block moves around all the screen, the penguin feels nice to control, my high score was 495, a really simple but amazing concept.

Really interesting concept! Easily the most creative way around the limitation I've seen so far. I love that the ice block slid around, but I was expecting it to make me slide much more. I ended up with a score of 1652 and there only seemed to be force from the block sliding at the very end, and it seemed to be inconsistent with the direction the block was sliding in... When the block slide down and left, the penguin slid directly to the right relative to the block, instead of sliding up and to the right.

Thanks for great feedback, Kyle!

One key thing we learned from this jam: players should be presented with the challenge right off the bat - like Flappy Bird’s pipes or the famous 1st Goomba in Super Mario Bros. We introduced our challenge too slowly for sure.

I appreciate you giving it a second shot and playing it for so long. 1652 an insane score, I have never seen one that high yet - kudos :)

Was not expecting to see what I saw when I ran the game at all, it put a big smile on my face :) The concept here was really cool but personally I felt the difficulty needed to ramp up a bit faster.

I was definitely not expecting the ice to actually slide across my screen. That is such a cool effect!  One thing that I wish was in the game was music. But other than it is really fun, so good job! Also my highscore is 663.

We did think about music for while you played but didn’t want to make it too… in your ear. So we kept the sounds simple. Thanks for the feed back an I’m glad you liked the sliding ice. Also. nice score!

Thank you for your feedback, I have played this game for hours and my highest is 1082.

Really clever idea! That's so cool how the window moves around the screen. My biggest critique is that the gameplay wasn't very challenging, maybe the penguin should've had to follow the window around instead of just sticking to it?

Thanks, Lightning! I appreciate the critique; the window drag actually applies a stronger reaction force to the penguin as the game progresses. It is extremely weak at the beginning for sure and the game gets harder around a score of 600.

Looking forward to getting off work and checking out all of the cool games submitted!

I only played it for a minute or 2 and I got to 374, I personally would've made it get harder quicker, but that's cool that it does get harder.

Ah, that is awesome feedback, noted! Thanks for playing!

When I downloaded the game I did not expect that at all, good job to both of you! That was an amazing surprise and a really creative way around the limitation :D