Round based top-down alien shooting on mars
Submitted by jppresents (@jppresents) — 8 days, 20 hours before the deadline
Add to collection 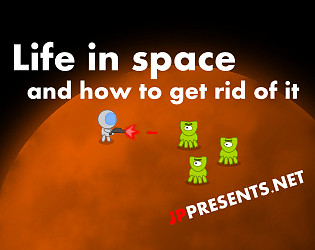 Life in space - and how to get rid of it's itch.io page

I also included it in my article of favorites from this jam here!

Cool concept, very well made! I included it in my LibGDX Jam compilation video series, if you would like to take a look :)

Very polished game, died at level 2. The gameplay is very smooth, simple turn based is quite fun. Excellent work with the sounds and VA.

Great work, I would love to be able to code this. (goes and stalks the source code)

Submitted
The Sounds Of Earth
LikeReply
Grayt AppsSubmitted5 years ago

stayed on this one longer than on other entries, overall good Work!

I amazed at the depth and polish of the gameplay. Nice work!

Just wow! The level of polish in this game is amazing. Where to start? The menu UI is super intuitive (unlike the UIs of some other games of the jam), looks great and animates. The game doesn't just throw you into the cold water, but introduces new concepts piece after the piece. All of that is done via amazing voice acting (!). The core game mechanics are kept to the absolute minimum required for a turn based game like this, while retaining a ton of strategic depth. The game even saves your progress on the web build. Which is awesome, because i had a little hiccup in level 2 and didn't want to restart. Really impressed with this game!

LikeReply
Sea of GobletsSubmitted5 years ago

The sound concept is really nice, especially the voice acting!

I can't finish the level 3, I always die trying to get the weapon upgrade (4 turrets at the same time in the north).

The pathfinding is awesome, working 100% with a single mouse click, great game!