The Maze of MezzlarusView game page

Submitted by sapphireLight (@britneypringle) — 7 minutes, 23 seconds before the deadline
Add to collection 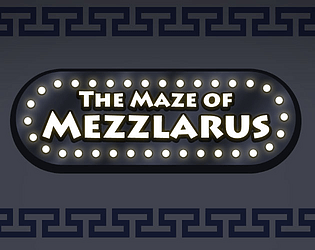 The Maze of Mezzlarus's itch.io page

Loves the graphic and art, this is great concept and gameplay.

I'll admit, this was a nice breather for me!
I needed this after playing so many long games. d(^^)

Functionally, there isn't anything wrong with this entry,
other than the glitch people mentioned (I hadn't come across it myself,)
so let's focus on what you can add!

Audio alone could contribute a lot of pizzazz to the proceedings.
Music, frantic announcer, audience reactions, etc.
This could be like a game show type of deal.

Flashy visual effects for everything that happens would also
ramp up the energy and bring liveliness to the maze world.

Variety in the minigames and traps is a must, as you already know.
Although I should kick myself for saying it, a ticking timer creates excitement!
It's a cheap but effective challenge modifier.

The game is super basic right now, but the foundation is solid!
Just keep adding to it over time and it'll come to its own.

TOTAL PLAYTIME: 8 MINUTES (I'm tempted to do a speedrun and halve that...)

FINAL VERDICT: If this were real life, I'd step on the fire wolves and climb over the wall.
That's thinking outside the box, literally!

Thank you for your detailed feedback! This game is definitely at basic prototype level right now, but I'm still glad I got to enter something. It's the first game I've made with Unity, so it was a learning experience using a new engine, for sure.

I have tons of plans for things I want to add to improve it, especially putting the host himself into the game.

It's funny you should mention climbing out to escape. I wanted to add barbs to the tops of the walls for that exact reason.

I like the graphics. Very clean and polished. The initial premise was pretty good, but I feel more variety of hazards and puzzles is needed. Sadly, I got stuck because one of the memory games wouldn't let me select a card after a few losses, so I could not get beyond the first 4-key gate

Thank you for playing and giving feedback. I definitely want to add more variety to the challenges. I'm sorry that you got stuck. That's an issue I will fix in a future update.

No problem. Looking forward for the future of your game. If you have the time, please take a look at my submission!

After 2 or 3 loses cards couldn't be selected to play.

Thank you for bringing this to my attention. I had not encountered that issue before.

I don't see the point of giving the jump anticipation frames in a first-person game in which the player has no feet. It just means the player has to press jump over a second before they would normally expect to. Also, the choice of "puzzle" you used is typically a bonus game for a reason.

Thank you for the feed back. I will keep the jump physics in consideration for future updates. As for the puzzle challenges, I have others planned. I only implemented the matching game in the entry to meet the deadline.