A manor turned into a museum? What secrets does this place hold?
Submitted by Uzuki (@SilverLynnGames) — 9 hours, 35 minutes before the deadline
Add to collection 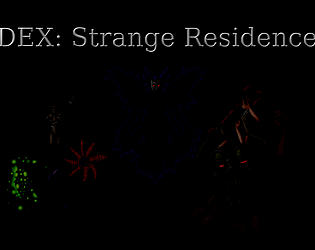 The game has some promise but it also has a lot of issues. The most blatant problem is the spelling - there's a lot of bad spelling scattered through-out. This is kinda of weird considering that the writing is rather decent aside from that aspect - grammar and punctuation isn't noticeably problematic, which is weird as one usually leads to the other. This caused a bit of a weird disconnect for me. The characters were... well, they were okay. Nothing amazing but not bad. That really kind of sums up the whole game for me, to be honest.

It was very standard RPG horror game. The mapping was decent, the battles were a bit on the easier side but were pretty basic. I did question a fair few design choices when it came to the gameplay - having some items shown on the map while others were hidden, having menu choices that seemed to be added just to be 'cool' instead of being useful... that kind of thing.

I liked that items had uses, like the broom being used to sweep up glass and the boards being able to be picked up and reused. That felt nice, though the broom being suddenly full of glass was a bit weird (since you can just give a broom a shake to dislodge items stuck in it. Felt a bit ham-fisted as a way to limit it's uses).

As to the sanity system. It's alright. I noticed people were comparing it to Darkest Dungeon and I don't really see it - it's not the first RPG horror game to use a sanity system in and out of battle, so I was kinda surprised that people were clamouring about it so much. It felt like just another stat, where-as the sanity in Darkest Dungeon is a lot more present and something you need to keep an eye on. In this game it just felt like another stat, like a TP or stress counter.

I also got to a point where I was 20 minutes in and just wanted to do something beyond talking to more people. It was a little annoying that it took so long to get into the game, I guess.

Overall the game was okay. Decent but with some issues. No offence meant, dev-chan, but I don't see why it was in the top ten as it seemed a fairly solid but standard game, but congrats for someone seeing enough in it to put it there. I went into it knowing it was a top ten title and thus my expectations were a bit higher for it than would normally be, so I did get rather frustrated with it at points.

Hello! And thanks for playing my game! Yeah there's a lot of issues that I'm well aware of and be sure that I'm going to iron them out. Part of the writing issues comes from me writing the dialogue at three in the morning and using a new method of writing from what I usually do. For the sanity meter thing I was inspired by DD to implant it but because of time constraints I didn't really get a chance to flesh it out like I wanted to. Same with the item obstacles and just the overall balancing of the battle system. There was going to be a whole section on the basement area that the first team would have had to go through to find the keycard, but it was just me working on this and unfortunately life decided to get hectic midway through development. Honestly I'm just as surprised as you are that my little fever pitch of an project was acknowledged as something with potential. Even if I don't win the final round I do plan on continue working on the game and I hope I can get your feedback on a more better balanced and finished product.

Now this is a neat little game! It's a shame it flies under the radar, but I'm glad the judges picked up on it. Congrats on making it in the top 10!

I enjoyed the story and world this game was introducing and combat was well balanced and fun. There were  a lot of typos and weird run-on sentences which were distracting and sometimes forced me to read the same line a few times to understand it, but the strength of the worldbuilding shines through all the same. What's awkward now can easily be polished up with a proper editor. (Like the intro scene with the car. Very cool scene, but it runs on too long and over explains things.)

I like that everyone can equip the same weapons (minus the dog), I tried to keep the bat with the sweep attack on my fastest character. The glass and wood planks are nice environment puzzles and I really like the Psyscan (though it's very underused in the demo) btw, small error likely, if you psyscan the room the main party drops in or the room with the glass and broom, inspection spots turn up on the wall where you can't reach them.)

I ended up getting stuck and was sad I couldn't save after asking what to do next. (after you get the one time use key from the zombies. I couldn't find any door to use it on.) I also have to wonder, did you make the party invincible? I thought I was going to die when everyone hit max SANS (btw the spring water adds SANS instead of taking it away lol) but somehow, the party pulled through at 1HP all around.

Anyway, great entry! I really enjoyed it. It's a wonderful start and will certainly shape up into a unique game if you expand on it and give it the polish it currently needs.

Hey Maki! Thanks for playing my game and I'm glad you got some entertainment from it. Sorry that you had to deal with my terrible writing and grammar issues, it's the price I paid for writing while tired and experimenting with a different way of writing.  Unfortunately I had rush due to time and I couldn't give it the polish that I would normally do. But I'm thankful that someone saw the potential of my little half baked project and whether or not I get the publishing deal I plan on finishing the game and I will be addressing and fixing all of the issues that are there and expanding on the ideas. Cheers!

I liked the intro, nice setup. I really dig the mapping, too. The place feels real, and
the characters have the right amount of definable personality and mystery.
I really liked the Wraith's debut, that scene was pretty neat.
The enemy encounters are appropriately spooky.

There were enough typos throughout to make a point of it.
They were mostly common mistakes peppered with a few misspellings.
I could still understand everything that was being said, though.
The dialogue is fun, and ultimately that's all my attention needs.

Unfortunately, my journey ended when it was time to switch to the second team.
They spawned right next to the door, meaning they got stuck in the wall for all eternity.
Such a fittingly horrific fate...
I'd actually restarted the game because of a bug with the west plank,
which wouldn't allow me to remove it after I opened the chest.
This time I got the ID card after going to the emergency exit,
and I even tried going to a different room before switching, but to no avail.

At any rate, I was able to play enough to get what the game was going for.
It does need polish, there's no *bones* about that. (Geddit? Horror pun!)
With what I was able to play, typos and glitches notwithstanding,
I thought it to be a solid title!

TOTAL PLAYTIME: There was no timer I could see, but let's say 50 minutes.
(Give or take the second playthrough with skipped dialogue.)

FINAL VERDICT: Is everyone barefoot? Walking on glass should be no problem!
Well, it's better late than never for them to understand the importance of footwear. :p

I'm sorry you came across that! I thought it was a bug I fixed before release, but I guess that's what I get for panicking and rushing it. I guess once the contest is done I'll upload the correct version which will fix the bugs and typos.

It happens. Last year, I almost uploaded my entry right at the ending because I was testing something.
I uploaded the correct version seconds before the deadline hit. It was like a movie! ^_^;
That entry has since been delisted for a few reasons, but I'm going to repurpose it next year.

Finding out about something like this sucks and I certainly don't want to be the bearer of bad news,
but at least there's a little sunlight in this cloudy situation!
Take solace that there's enough content here for players to grab onto.
I'm certain there are entries that don't plain work or haven't had anything uploaded at all. Oof.
Then there might be entries that do work but carry the uploader's pet viruses with them.
Ranking on the nightmare scale, this particular case isn't so bad! d(^^)

This was a well done entry! Atmospheric, engaging writing, and well done cutscenes. Really nice work! Interesting mechanics, good dialogue, I was NOT expecting that in the Foyer. Wow, very cool. :)

I'd change the text sounds to be every 3rd letter or so, or to be quieter. It did become a little distracting because of how immersive the rest of the game was.

There were a few errors in the text, 1 spelling error and 1 missing word, in the foyer area.

The battle tutorial had a word or two cut off because the text box was not big enough.

Maybe change the names of the buttons on the keyboard - they were to scrunched in to know what you were changing on the button common events.

Great job introducing, then ramping up into exploration mode, adding in on map battles and explaining everything thoroughly.  Overall, an enjoyable game - nice job!

Submitted
Rise of the Pharaoh
LikeReply
UzukiDeveloper1 year ago(+1)

Thank you so much! Honestly I'll be sure to fix those errors and the keyboard lettering I'm looking into now.