The Chronicles of EspiriaView game page

Kent, an asteroid miner, finds himself marooned on a mysterious magical world.
Submitted by DrassRay - Jacob Mann — 15 days, 8 hours before the deadline
Add to collection 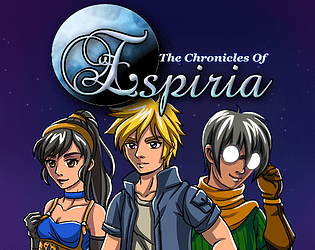 The Chronicles of Espiria's itch.io page

I played another rpg of yours on a jam,
"Washed Up" I guess. Noteworthy the evolution in the composition of the game o/. Congratulations!

Thank you very much, DBR! :D

The game has a lot of great points going for it. It really put me in mind of jRPGs from the early Playstation 1 and 2, and I really liked the overall feel of the game. The characterisation is a bit bland at points, however, and can seem a little rushed. Understandable that this is a prototype and not the full game, so it doesn't take the time it normally would to let the characters get to know each other and fill in the NPCs and world with more than just a quick splash of identity. Something to look forward to in the future, though.

I do wish the skill learning were a bit less 'my first skill tree' in visual - it lets down the rest of the game. I'm also not a big fan of the way you choose which character to upgrade during it. It's one of the biggest issues I have with the game for as much as I played it. I think it'd work as a menu styled thing than just 'floating in space with staaaars'. The aesthetic is a bit weird.

That said, the sound, gameplay and overall charm the game exudes makes it one of the few I've given 5 stars. I really enjoyed this game. Great job!

Thank you so much for playing! :D I'm really happy you liked the game. PS1 era JRPGs are some of my biggest inspiration. I really want to flesh out the world more in the future like you mentioned.

The Skill Tree was something I really wanted in the game but had no options in the original engine (Smile Game Builder) to add as a menu, which I would have also preferred. So, to my own demise, I decided to event the whole thing. Looking back, I might have scaled it down a bit and made it more graphically appealing, and more snappy like an actual menu. Oh well, I got the time to do it now! lol

Thank you so much for the valuable feedback and for scoring it so high as well. Made my night!

All of the work that went into this game is just amazing. To get this kind of quality in only the short amount of time given is nothing short of spectacular!! Great work, you certainly have my vote!! I look forward to any games you make in the future and I hope this one wins!!

Fun game. Here's my full review of it.

We must have played the same games growing up because you nailed my points of inspiration. I promise I don't want to take too much from those games, but at the same time, I hoped I would see the nostalgia this game would invoke to others like me .  I plan on improving the game as much as I can now that I have more time for polish and story building. So, hopefully you'll have more to play in the future. Thank you so much for playing and thanks for the review!

Hey, nothing wrong with taking inspiration from other works (Lord knows I do it all the time, including this year's submission) as long as you then make it your own. It did bring back some fond memories. I'm gonna keep playing the demo, but let me know when  final game is up somewhere. I definitely want to see how this one turns out.

Great game, I had a a lot of fun streaming it with you! : D (The thumbnail STILL won't update...)

Glad you liked it! Thanks so much for playing! Had fun too. :D

I gotta say that I expected it to be an RPGMaker game but once i booted it up, I was surprised with how the game was in 3D. It reminded me of harvest moon for some reason. At any rate, I will say that it's very grindy (which isn't bad, people enjoy that) and the combat had a lot of love and effort behind it.

The music in this game is also a strong point of the game and it's so subtle that you don't even notice how fitting the music is until you realize you're humming the battle theme.

My main gripe about this is the lack of plot/character development. The story feels a flat in my opinion and there's not much going for the characters cause the interactions are very brief. Kent felt like a cookie cutter JRPG protagonist and Lain felt like a carbon copy of strong female lead other games have done before. This isn't necessarily a bad thing imo since archetypes have *always* been a thing and I can definitely see you fleshing out the characters in the final game but imo, what you have right now has been done before by so many JRPGs and I would love to see you do a different take instead.  I firmly believe however that you can get away with the lack of interesting plot/not fleshing out your characters because of how the game is presented which imo is 5 stars.

TL:DR: Probably a favorite to win IGMC. Would definitely love to see more work on the plot and maybe difficulty options for those who don't want to grind. Good job!

ooOOoo, thanks for the lengthy feedback! I'm really happy you enjoyed the game as much as you did. I was worried that some people would be turned off by some of the grind and did think about a difficulty setting, so when continuing this game it maybe something I decide to actually do.
I'm glad you liked the music, I wrote most of it myself (some new some reused from older projects), but there's a couple songs towards the end that are from the Smile Game Builder engine that found their way in there because I forgot to change them, oh well. They are noticeably different from the rest though. =P
Plot and Character development are always my weak point when I'm crunched for time, I'm glad you mention it though, because I always need a reminder to work on it more, hopefully I can bump heads with some of my more writing inclined friends and we can come up with some more unique devices and hooks for each character.
Thanks for playing! I'm more than happy to be considered a favorite.

This is such an amazing game, it has so much going for it. I loved every bit of it.

This gives me so many feelings of nostalgia it's insane. One of the better RPGs I've played in a while.

Really enjoyed seeing you play it, thank you very much!