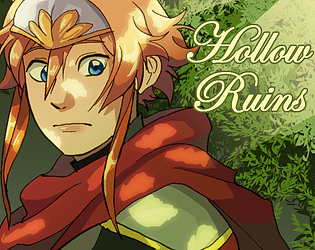 Custom Assets
Portraits, sprite edits, CGs, and title screen are all by me.

Please consider making a full length game. I'd buy it without hesitation, based solely on the quality here.

Good story with a twist as the prologue of Harold's adventure. The custom art is great too!

Excellent game, I love the engaging story and the development for the story, this game is like a sandwich, each layer is designed to give the player information about each character thoughts and background. I will look at this mainly as Prologue if you truly decide to make a chapter 2. I hope for more combat and more engagement for the player.

Another thing that you will have to look for is the setting of the scene transition tiles, because its not set on touch but on action. so this will have to be fixed for the player to progress. over all i love the atmosphere of the game and it was a joy to play. Great work for your first game

Thanks for the feedback! A lot of it was rushed (like REALLY BADLY rushed) but things like the transition stuff and issues you encountered while playing like the unpredictability of random attacks wouldn't have taken any time to adjust, so it's really useful!

I want to make a similar game in RPG Maker MZ first to get some practice in, but hopefully I can return to this with a bunch of updates and chapter 2 sometime.

Normally I don't enjoy too much story based stuff. Words in video games hurt my sleepy brain. But I really think you nailed that aspect and made it worth experiencing. The dialog was really good, and the characters had dimensions. There was a hint at a world that I want to understand better. I got goosebumps from the later turns and I loved the introduction of characters that I thought I knew.

It's definitely a more mature, serious take than other entries, but is it Harold? Yes, I think it is.

I haven't even mentioned the custom facesets and other custom art. I mean holy moly, the emotion that you can convey with your facesets is head and shoulders above the slightly different mouths I can make with the default. And Harold is just. . .  he's just. . .really pretty. I'm really interested in the relationship between Harold and his "master" and I gotta meet that final arcane mage.

Just a glimpse of a game you want to see occur, so make it!! I will play it.

OK, so maybe it was a little too long for the jam, and the battles were basically an afterthought. But I thought it was a very solid entry. So glad you submitted one!

The following is a transcript of my thoughts while playing the game:

+ Nice custom title screen.
+ Wow, a window skin! Cool!
+ So much custom art and I'm only on the intro cutscene. Wow, you put in work!
- Battles in which you have only one skill shouldn't last for more than 2 - 3 turns; otherwise they get boring rather quickly.
- You put in so much work on the custom sprites, but only used front view? I understand that cuts down considerably on your workload, but it's not as nice to look at.
- I would have liked to see a life bar on the enemies so I can better strategize.
- The large trees make for a beautiful map, but it's too easy to lose yourself and other characters behind them.
- Some of the foliage/doodads block movement, others don't. Feels inconsistent.
- I prefer the spaces that transfer the player to new maps activating on "player touch" rather than "action button."
- Tiles at the beginning of the second map imply different levels of elevation, but you can walk on all of them equally.
+ I like how you get a signal when you've done everything on a map.
+ Harold's face reminds me of Link from the Legend Of Zelda.
+ I see why you decided to make your own custom face sets: you can express emotions more exactly than with the default sets while keeping the style consistent. Good move!
- I saw in the description that you heal by dying or running from battles; that seems a little clunky. Couldn't we heal at a specified location, or maybe after each battle since they are so few?
- It's kinda odd that the on-map enemies are depicted as slimes, but they're always flowers.
+ OK, one of the enemies actually was a slime pod.
- I find I'm relying on Wide Sweep exclusively. Also, it doesn't seem to be that different from dual attack. Needs balancing.
+ Wow, that plot twist toward the end!

Also, is this a typo? If not, what do you mean by "untained?" 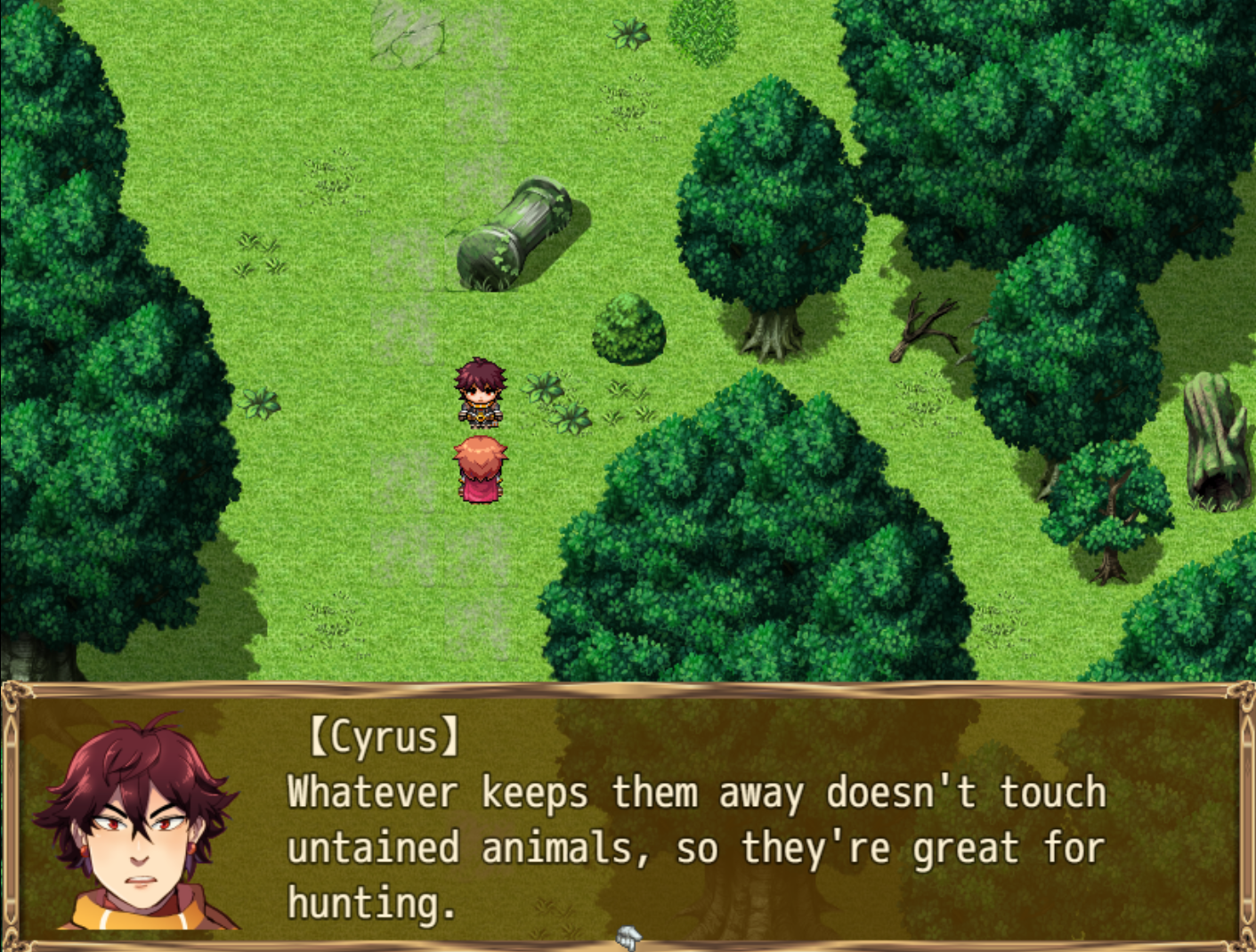 There are also a couple of tile passage errors: 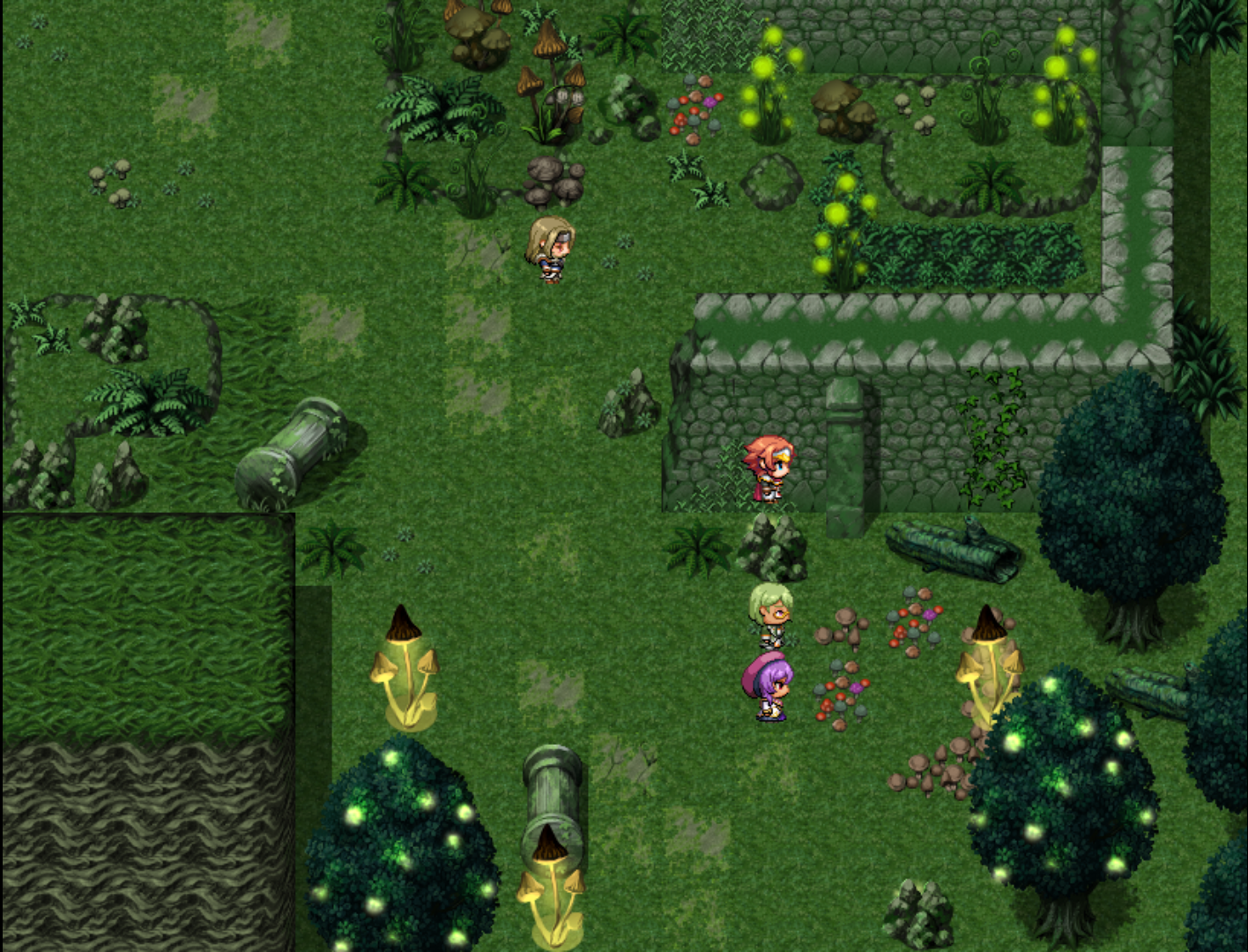 These are just minor issues, though; nothing game-breaking.

Overall, this is a fabulous effort for making a story-driven game with beautiful artwork. If this is just the first draft and you're planning on fleshing this game out, then you did well because you've overcome the most important hurdle: everything works. The things I would recommend prioritizing as you edit would be the mapping and the battle system. As stated earlier, the maps are beautiful, but there are some design issues that make them difficult to navigate. The battle system feels a bit tacked-on, too; while it exists to keep the game from being a plain walking simulator, there doesn't seem to be much point to it beyond that. It doesn't have any effect on the story, which begs the question: why have a battle system at all? Here's an idea: instead of a battle system, put puzzles in each of the maps that the player has to complete in order to progress through the story. For instance: a moving-block puzzle at the final temple in order to gain access. Just my 2 cents (though maybe more like 10 cents by this point 😛).

Hopefully this isn't too much information. It's a solid entry, and a cool story.

The point of using those customized assets was just that I hate the way RTP looks, and the only sideview sprites I have have RTP faces, so RIP frontview it is 😔

Overall, a lot of this is just time constraints. I was essentially relearning 70% of how to use MV at all with a 5-day deadline while I was already injured. The game itself was made in about 2 and a half days. Things like the tacked-on skills were just because I knew the battle system was difficult, but I couldn't balance it without taking some trial and error time, so I just slapped on skills that would speed up the process. Same with the tiers being walkable; because I drew a map that relied on being able to walk on those tiles, it was just faster to make it possible to walk on than redraw an entire 3rd of the map from scratch. I had NO time.

It's actually interesting to see how much "no time; apply the most superficial version of my idea" looks just like "idea unfulfilled" from a player's point of view. There's obvious problems I have to really focus on and remember when making a new game, but also stuff that I would never do if I had even a tiny bit more freedom. It's good for mindfulness, especially the need to make cuts rather than leave in unfinished stuff.

Given how little experience you have with the engine and how little time you had to make the game, it looks good! And yes, making a good battle system is HARD. I've spent whole days trying to get the balance right.

Good luck on your future project endeavors (be it growing this one or making a new one), and I hope you recover from your injury soon!

Hollow Ruins has *atmosphere* man. I can't put my finger on it exactly, but it made me feel something, which is for me personally one of the greatest possible achievements of a game.

First, the music: From the Title track (which I've just left running since finishing the game lol), I loved every single tune...they all set the mood perfectly. My only critique would be that the default Victory ME momentarily snapped me out of the trance induced by the BGM every time.

Second, the maps: very beautiful, my favorite piece was the bioluminscent mushrooms.

Third, the writing: this was a lot of dialog to get right, and overall it was precise and meaningful. The characters and world both had nice depth for a short adventure.

Actually I take back what I said before. I did rage quit at first, but got the hang of it. I really enjoyed this game, and it's story. You did a great job. Keep up the good work.

Hehe, the [moments] have surprised me, I enjoy the story.
;)